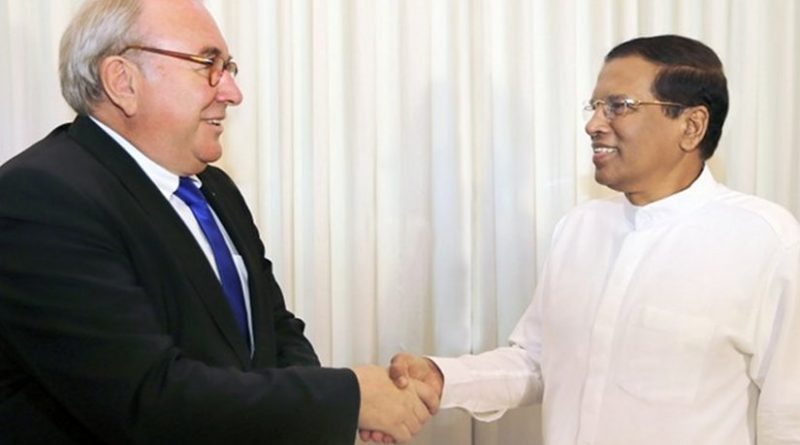 The head of the visiting German Business Delegation to Sri Lanka, and the Parliamentary State Secretary for Economic Affairs and Energy, Mr. Uwe Beckmeyer called on Sri Lanka’s President Maithripala Sirisena at his residence on Monday.

Underling the priority given economic development for achieving sustainable development and peace, the President said, ‘Economic development is the basis upon which strong democracy and lasting peace can be built’. He welcomed the fact Germany is supporting vocational training in Sri Lanka and also the fact the German investments have created more than 10,000 direct jobs in the country.

Beckmeyer, while appreciating the progress Sri Lanka has achieved internationally and locally during a relatively short period of time, emphasized the German’s government commitment to bring Sri Lankan and German businesses more and more close to each other, and that the present visit of the delegation was a part of this initiative. Parliamentary State Secretary Beckmeyer expressed his hopes for continued goodwill and healthy business relations.

Sirisena assured that he will instruct the Ministers and Officers to review the progress of business development between Sri Lanka and Germany every three months and report to him, upon which further strengthening of bilateral economic ties will be possible.