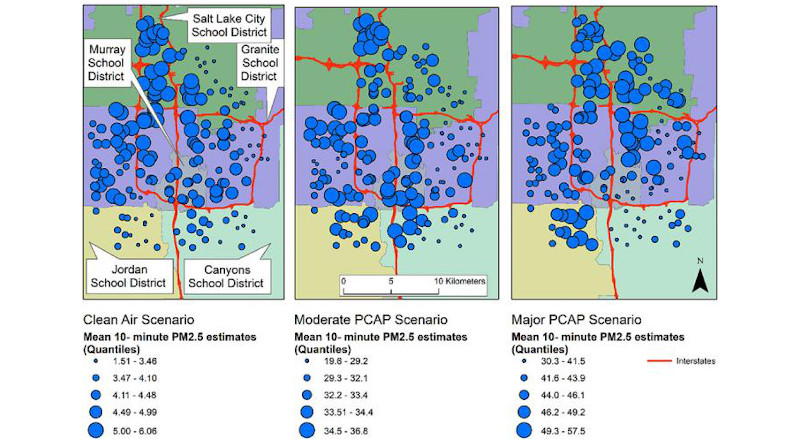 Mean 10-min PM 2.5 levels for each 48-hour scenario at the Salt Lake County schools during a clean, moderate winter persistent air pool (PCAP, inversion) and major PCAP event. The bigger the blue dot, the higher the concentration of PM 2.5 particles. In all three scenarios, the lowest PM 2.5 concentrations were on the south and east side of the study area along the bench where elevation ascends from the valley floor. CREDIT: Mullen et. al. Enviro Res (2020)

Salt Lake County, Utah’s air pollution varies over the year, and at times it is the worst in the United States. The geography traps winter inversions and summertime smog throughout the Salt Lake Valley, but underserved neighborhoods–and their schools–experience the highest concentrations. Previous research has shown pollution disparities using annual averages of PM 2.5 levels, the tiny breathable particles that can damage lungs just hours after exposure. Children are especially at risk and experience more than just health effects; exposure to PM 2.5 affects school attendance and academic success.

A new study utilized a community-university partnership of nearly 200 PM 2.5 sensors through the University of Utah’s Air Quality and U (AQ&U) network. U researchers explored social disparities in air pollution in greater detail than ever before, and their findings reveal persistent social inequalities in Salt Lake County. The paper posted online ahead of publication in the journal Environmental Research.

“The persistence of these injustices — from the pretty clean, but health-harming levels all the way up to the horrific air days–at schools serving racial/ethnic minority kids is unacceptable,” said Sara Grineski, U professor of sociology and environmental studies and senior author of the paper.

The authors expected social disparities on bad air days, but were surprised that they persisted on clean air days when PM 2.5 levels are still higher than recommended by the U.S. Environmental Protection Agency.

“What makes this project so novel is the community-U partnership that gave us access to this larger network of sensors and helped provide the detailed study. If we had relied on Utah Department of Air Quality, we’d only have had two monitors and would have missed the nuanced variability,” said Casey Mullen, a doctoral student at the U and lead author of the study.

The worst PM2.5 episodes occur during the winter, when cold air settles into the Salt Lake Valley and high pressure weather systems act as a lid that seals in particulate matter from vehicle exhaust, wood-burning fires and emission from industrial facilities. Locals refer to these periods as inversions, which can last from a few days to a few weeks. The lowest elevations experience high concentrations of PM 2.5 for the longest time, impacting the residential communities disproportionately. The study compared the PM 2.5 levels at 174 public schools in 10-minute increments over 2-day periods during each of three events: a major winter inversion (poor air quality), a moderate winter inversion (moderate air quality) and a relatively clean, fall day (good air quality). The extensive AQ&U network made up of 190 PM 2.5 sensors is extremely sensitive– each sensor collects PM 2.5 concentrations every second, then uploads the 60-second to a database that the public can access through the U’s AQ&U website: https://aqandu.org.

The researchers broke down 174 Salt Lake County public schools with respect to race/ethnicity, economic status, and student age. They also distinguished between school type; Title I Status (schools serving majority low-income households), charter school type, and alternative or special education school type. The average student body was 31% Hispanic, 15% non-Hispanic minority, and 54% white and about 45% of the schools were Title I eligible. Just over half of the schools were primary schools, about 16% were charter schools, and about 5% were alternative or special education schools.

“No one has yet looked at school type in terms of environmental justice. Charter schools are a new variable that intrigued us,” said Mullen. “It’s starting to build on some other story – why did we find these inequities in charter and Title I schools?”

This paper is one of many collaborations using the newly established AQ&U network.

“This is the first publication from such a diverse cross-disciplinary partnership arising from AQ&U, although we anticipate this is the first of many,” said Kerry Kelly, assistant professor in the Department of Chemical Engineering and co-author of the study. “We are enthusiastic about ongoing partnerships–to understand the effect of pollution microclimates on asthma exacerbations; to predict the severity of wildfire smoke plumes; and to engage student researchers and community partners in understanding the effect of sound walls on air quality.”

In future studies, the researchers hope to fill in even more gaps in the sensors to get a better picture of the social inequalities in Salt Lake County, Utah and in other areas, especially with regards to school-aged children.

“I see research like this continuing to build a wall of evidence that we have to do better in the way in which we regulate pollution exposure in the U.S. and worldwide,” said Grineski. “Evidence on top of evidence points to us having to do a better job of protecting people, especially kids, from pollution.”