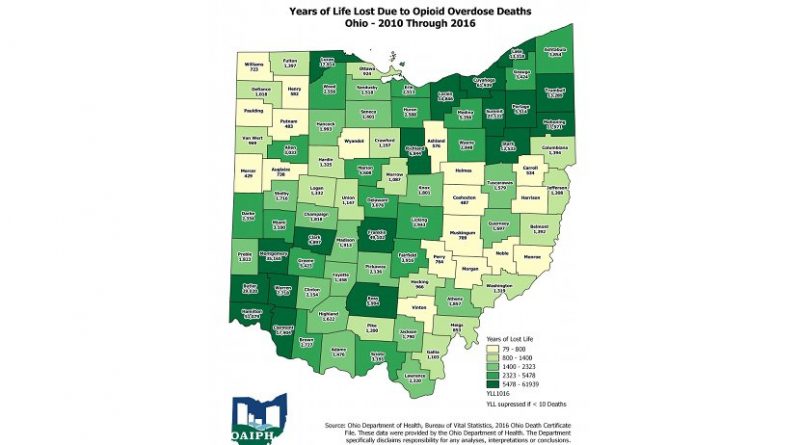 This map breaks down the number of years of life lost to opioid deaths by county in Ohio from 2010 through 2016. Credit: The Ohio Alliance for Innovation in Population Health

More than 500,000 years of life expectancy were lost in Ohio during a seven-year period, according to a study conducted by The Ohio Alliance for Innovation in Population Health (OAIPH) — a collaborative initiative formed by Ohio University’s College of Health Sciences and Professions and the University of Toledo’s College of Health and Human Services.

As opioid overdose continues to increase as a cause of preventable mortality in the state, the OAIPH set out to examine how opioid overdose deaths contribute to increased mortality and to shine a light on the effect of the epidemic on the lifespan of Ohioans at the state and county level. “This data gives us a picture of the profound impact of opioid related deaths,” said Rick Hodges, director of OIAPH. “These are people in the prime of life during their most productive years. The data also tells a story about families and communities.”

The years of life lost (YLL) was calculated from data abstracted from the Ohio Department of Health, Bureau of Vital Statistics, Ohio Death Certificate File for the years 2010-2016. YLL due to premature death were calculated at the state and county level and patterns of opioid overdose mortality were mapped geographically and monitored over time.

A number of key findings stand out in the study:

“One of the most heartbreaking aspects of the opioid epidemic is the incredible loss of life as so many young people die of overdoses,” said Randy Leite, dean of the OHIO College of Health and Sciences and Professions. “The years of life lost data paint a picture of the greatest consequence of the epidemic — the loss of so many individuals who could have been productive parents, spouses, workers, and citizens.”

“These numbers are staggering. Ohio University has made a commitment to provide resources to help reverse the rising tide of the opioid epidemic,” added President M. Duane Nellis. “This study is one example of the work that we are accomplishing to meet this important priority.” Nellis recently created the Opioid Task Force, comprised of both community members and University faculty, staff and administrators from the Athens and Regional Campuses, to collectively elevate the impact of the region’s opioid-related initiatives.

Of the Task Force, Nellis said, “We can make significant progress in combatting this epidemic in a concerted, coordinated manner and leverage our collective expertise to save lives and enact real change toward the betterment of our region.”

Years of Life Lost (YLL) was determined for fatal opioid overdose decedents in Ohio from 2010 through 2016. This was accomplished via a standardized protocol employed by the World Health Organization Global Burden of Disease Study.2,3 The age at death for each decedent was subtracted from the standard life expectancy accounting for gender. Life expectancy was determined from the Social Security Administration Period Life Table.4 Data used for this analysis were provided by the Ohio Department of Health.