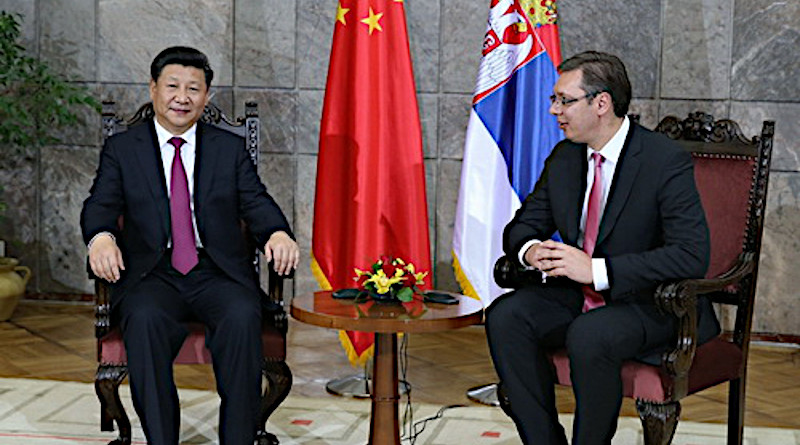 (RFE/RL) — Serbia’s ruling right-wing populists are expected to dominate this weekend’s national elections following a campaign that has featured a lot of flag-waving.

It’s just not the flag that most would expect to see in the Balkans, where the wedges of ethnically fueled nationalism and regional influence are countered by the economic and political allure of Western integration.

Instead, it’s the yellow-starred, red banner of communist China.

For months — including under a state of emergency over the COVID-19 threat that interrupted more than a year of weekly pro-democracy protests — President Aleksandar Vucic and his government allies have encouraged Serbia’s 7 million citizens to see China as vital to the nation’s fate.

Reportedly bankrolled by Vucic-friendly media and local governments, billboards and other prominent displays of gratitude toward China and its president, Xi Jinping, sprang up in Belgrade and other Serbian cities during the COVID-19 crisis.

Official mashups have reinforced the notion of Sino-Serbian “brotherhood,” even overshadowing the more familiar presence of the Russian tricolor that serves as a frequent counterweight to pro-Western political forces.

“I think that Vucic is playing the Chinese card primarily for the home crowd,” Tena Prelec, a research fellow at Oxford, told RFE/RL’s Balkan Service.

She noted that, after spending months playing up Chinese investment, Vucic recently “corrected his attitude toward the EU and acknowledged that the EU countries are the biggest investor in Serbia.”

In that preelection interview with RFE/RL, published on June 7, Vucic insisted that “We talk to everyone.”

“As far as we are concerned, we are on the European path,” Vucic said. “We are not giving up on that.”

But he added that he valued Beijing’s diplomatic backing over Serbia’s biggest diplomatic irritant, its decade-long refusal to recognize the independence of its former autonomous province of Kosovo.

“[We] unequivocally get that support for the integrity of Serbia from China and Russia and, on the other hand, we have very good economic cooperation and cooperation in all other areas,” he said.

Prelec described it as one Vucic narrative for “internal use” and another for audiences abroad.

China has made Serbia a recent centerpiece of its European economic and political strategy by directing billions in loans and investment into the Western Balkans as part of its New Silk Road strategy. It does billions of dollars more in annual trade with Serbia.

All at a time when the European Union is lukewarm about further expansion to include candidate states like Serbia and EU members are tightening restrictions on Chinese ownership.

High-profile Chinese ventures include infrastructure projects like an ultramodern Belgrade-to-Budapest railway and Chinese strategic investments into traditional employers like the RTB Bor copper mine. Such largescale undertakings help shape a narrative of Chinese commitment to Balkan operations.

Beijing has also tapped into Western unease at state capture and perceived democratic backsliding in Belgrade as Vucic has consolidated political control of institutions and major media while chipping away at press freedom.

But it is Vucic, his Progressive Party (SNS), and their governing allies who have spurred the sudden elevation of China to such prominence inside the country.

“It signals the connection not only between the government of Serbia and the Chinese state and Chinese companies, but also between the political party that is currently in power” in Serbia and the Chinese, according to Stefan Vladisavljev, program assistant at the Belgrade Fund for Political Excellence (BFPI), an NGO that promotes democracy and European integration for Serbia.

Early in the global pandemic, Serbian Foreign Minister Ivica Dacic became the first top international diplomat to visit Beijing at the height of the Chinese outbreak in late February, in what he called a show of Serb “solidarity” with China.

He emerged from the trip echoing an unproven conspiracy theory — first floated by Chinese officials — that the COVID-19 outbreak might be “part of a special war against China.”

But Belgrade’s sharpest rhetoric came early in mid-March as COVID-19 exploded in Europe, in an angry speechin which Vucic brushed aside “European solidarity” as a “nonexistent…fairy tale on paper” in one breath and in the next suggested Xi and China were “the only ones who can help us in this difficult situation.”

It was a simple, but potentially misleading, message.

China delivered some aid in the form of masks and other medical equipment, and it dispatched a half-dozen health-care advisers to Serbia.

But while they were widely criticized for moving too slowly initially, EU countries eventually contributed tens of millions of dollars’ worth of health-care and other emergency aid to Serbia to help it cope with the coronavirus.

Serbia’s first parliamentary elections since 2016 were initially set for April 26, but were postponed when the COVID-19 state of emergency was declared.

Now, ahead of the country’s first parliamentary elections since 2016, the ruling coalition appears to be trying to show off its deep-pocketed Chinese friends to beat back the challenge from a divided opposition — some of whom are boycotting the vote to protest electoral reforms that appear to favor the ruling parties.

“In relation to China in general, there is certainly a benefit for the SNS in the sense that economic relations between the two countries are very important,” Prelec said.

Vucic and Chinese Ambassador Chen Bo met at the construction site of a planned Belgrade-to-Budapest, high-speed railway on May 30.

Around the same time, Vucic went out of his way recently to signal support for the Chinese Communist Party’s effort to tighten Beijing’s security grip on the specially governed territory of Hong Kong despite a widespread international outcry.

The backing from Belgrade prompted a letter of gratitude from Xi.

And Prime Minister Ana Brnabic and her cabinet, which includes a number of faces from Vucic’s last government before he moved to the presidency in 2017, have also gone to great lengths to play up Chinese ties.

The same day, Construction, Transportation, and Infrastructure Minister Zorana Mihajlovic and Belgrade’s mayor appeared alongside a senior executive from a Chinese company building a highway bypass outside Belgrade.

The next day, Mihajlovic appeared alongside Chen at the signing of a joint Serbian-Chinese agreement to build a new stretch of highway in western Serbia.

On June 11, Brnabic and Mining and Energy Minister Aleksandar Antic visited the Bor mine and met with executives from its Chinese majority owner, Zijin Mining Group, for a photo op.

Anti-COVID-19 measures have kept a lid on in-person campaigning to prevent the spread of the disease, amplifying the importance of official access to media.

Many of the events have made their way onto Progressive Party social-media accounts.

“We have the promotion of Chinese projects as part of the election campaign, and these are large strategic projects that unquestionably contribute to the state infrastructure of Serbia,” Vladisavljev said.

The Proof Is In The Pudding

Even in the area of investment, however, while Serbia has been a mounting focal point for Chinese political outreach and loans and investment into Europe, the numbers pale in comparison to EU-Serbian investment and mutual trade.

EU companies were responsible for nearly 70 percent of cumulative foreign direct investment (FDI) to Serbia between 2010 and 2018, for instance.

And Vucic acknowledged in his recent RFE/RL interview that two-thirds of Serbia’s trade is with EU members.

“Serbia has nearly 1,000 times less trade with the People’s Republic of China than just two EU countries,” he said in a refence to the Netherlands and Germany.

Much of Serbian officials’ cheerleading for China has appeared carefully crafted to spur the EU into moving faster on Serbian membership and other integration efforts.

And Vucic, who wants to be seen shepherding the country toward EU-level prosperity, is eager to further the notion in the minds of potential voters that outsiders regard Serbia as an attractive investment destination.

“Maintaining a very high rate of foreign investment is something that the Serbian government is very proud of, and it is crucial for Vucic’s entire narrative of a successful economy, which is very important to him,” said Prelec.

Few doubt that Vucic will hold most of the cards after the June 21 elections.

He hinted recently that, if his SNS wins, Brnabic — an openly gay independent who lent the party a liberal social sheen after stepping in to fill the gap left by Vucic’s move to the presidential seat — will be just one of a number of possible choices for prime minister.

And there are already signs this week of a possible postelection pivot to tend to relations with trade and diplomatic partners closer to home.

Foreign Minister Dacic last week said Sergei Lavrov, his Russian counterpart, would travel to Serbia this week in a seeming show of support for the ruling coalition.

Russia has linguistic and historical ties to Serbia, as well as being a vocal opponent of Kosovar independence on the UN Security Council.

Vucic has already received an invite to Russia a week after the elections to meet with President Vladimir Putin and observe a Victory Day parade to mark the end of World War II that was postponed amid the coronavirus pandemic.

A pivotal juncture could also be approaching in Belgrade’s longstanding opposition to independence for Kosovo — its former autonomous province — with the United States in particular pressing hard for a deal to normalize diplomatic relations between Pristina and Belgrade and tamp down instability from the dispute.

A deal to return Serbia and Kosovo to negotiations could clear Serbia’s biggest impediment to deeper and more expansive relations with the West.

U.S. special envoy Richard Grenell has announced that Serbian and Kosovar representatives will meet in Washington on June 27 for talks, likely to include Vucic and Kosovar President Hashem Thaci.

Grenell suggested that each side had made “temporary” concessions in the run-up to that visit, including Belgrade “pausing” its long-running derecognition campaign aimed at eroding support for Kosovo statehood.

And although no meeting with Serbian officials has been announced, the European Union’s special envoy, Miroslav Lajcak, was scheduled to be in the Kosovar capital this week to press for a resumption of the dialogue, according to an EU spokeswoman in Pristina.

A breakthrough on the stubborn impasse with Kosovo could end a decade of tension and help stabilize the Western Balkans to encourage greater Western trade and investment in Serbia and the region.