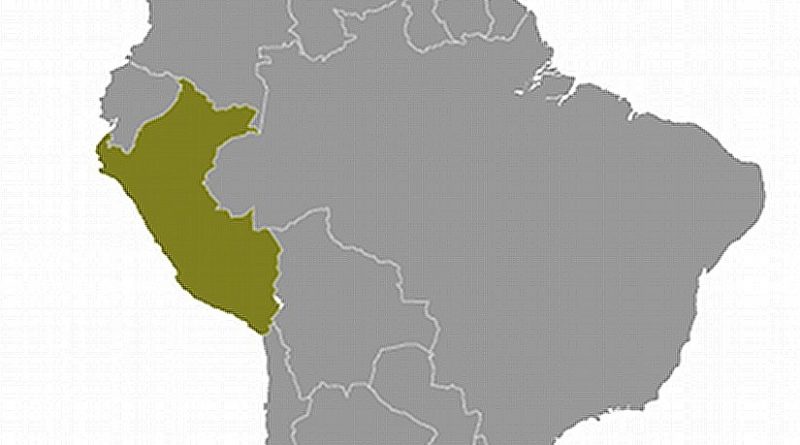 Peru’s burgeoning economy is a result of the government’s two decades of pro-mining policies and free-trade agreements. President Ollanta Humala presides at a time when the extraction and exportation of natural resources has earned international acclaim. The International Monetary Fund (IMF) indicated in a 2014 report that 70 percent of Peru’s foreign direct investment (FDI) comes from mining. China, the United States, Canada, Switzerland, Australia, Mexico, and Brazil are among the leading investors. The Peruvian Ministry of Energy and Mining (MEM) anticipates an estimated $57 billion USD in new global investment over the next three years. [1] Regardless of the economic windfall predicted by the MEM, existing water purification, taxation, and illegal mining regulations do little to reduce the negative side effects of mineral trade on Peru’s inhabitants.

The economic policies set into motion by Presidents Alberto Fujimori and Alan García Pérez exploited Peruvians through violence and pollution.[2] Extraction projects continue to affect towns surrounding worksites negatively because of such factors as displacement, water contamination, and deforestation. Ignoring these aspects will leave Humala with a legacy of human rights parallel to his predecessor’s legacy, something he should not desire. The President now finds himself in a somewhat precarious position; his legacy will juxtapose economic prosperity for the wealthy with exploitation of the poor.[3]

Unfortunately, growth-inducing economic policies were concurrent with gross human rights violations. The Truth and Reconciliation Commission (CVR) published evidence of atrocities committed under Fujimori’s authoritarian rule in a 2003 report.[7] The CVR found the Fujimori regime to be responsible for massacres, thousands of abductions, countless executions, the formation of death squads, and abusive detentions.[8] President Alan García, like Fujimori, carried out wrongful arrests of organizers and protestors for the sake of industrial expansion.[9]

The Ministry of Energy and Mining, the National Tax Authority, and the Ministry of Finance all supervise the taxation of the $30 billion USD derived from mining.[12] These bureaus regulate through corporate income taxes, royalties, liens, and concession rights.[13] To be more inviting to extractive investors, free-trade agreements eliminate double-taxation between trade-partners.[14] Counterbalancing the taxes, deductions are made available to organizations that elect to extend their projects towards infrastructure development, nullifying the costs of concessions.[15] The United States accounting firm Price Waterhouse Cooper (PWC) offers praise for the investment climate in the South American country, stating in a 2013 report, “Mining companies can find the political and socio-economic environment within Peru very attractive.”[16] Many transnational firms share PWC’s opinion of Peru’s emerging economy, deeming it worthy of extensive investment.

With little regard for social cost, illegal mining reached unprecedented levels during the 2000s as the global demand for precious metals continued to increase.This ailment has plagued the nation for decades and is now rampant with estimates of unlicensed operators ranging from 100,000 to 550,000. Miguel Santillana from the Institute of Peru discussed some of the damage these unregistered miners leave in their wake, citing “environmental damage … including mercury contamination of water and destruction of the Amazon forest, as well as … increased crime and corruption.” Illegal extraction is one of the many obstacles Humala needs to address more aggressively. [17]

Unregulated miners represent a tremendous loss to the government. The Peruvian Treasury loses an estimated $500 million USD annually from unlicensed laborers who leave pollution and financial damage in their wake.[18] The projects compliant with regulation emit less mercury and lead than their counterparts.[19] In an effort to recoup lost tax revenue and temper the ecological contamination caused by these illicit activities, Congress signed legislation in 2012 offering illegitimate operators a two-year period to register and become compliant with trade regulations.[20] As the April 19, 2014 deadline arrived for registration, more than 30,000 miners, or 30 percent, ignored the invitation for amnesty.[21] Ernesto Ráez-Luna, an Advisor to the Ministry of the Environment, acknowledged the impracticality of the commission, stating, “You can’t prosecute or arrest 100,000 people.”[22] Meanwhile, Humala’s administration succeeded in vilifying unregistered miners as the predominant cause of environmental degradation.

In a modest effort to address the tens of thousands of non-compliant miners, the administration formed a commission to evaluate the illegal activities. The most notable response was a police raid in the town of Huepetuhe shortly after the April registration deadline that seized and destroyed $20 million USD in heavy machinery.[23] Illegal miners function as a convenient scapegoat for soil and water contamination, but these problems stem from decades of inadequate regulation. Whether extracting minerals by licensed or unlicensed miners, the value seems to outweigh the environmental costs.

Among the 12 sought-after minerals in the country, those with the highest demand on a global scale are iron, lead, copper, silver, and gold.[24] Extensive copper deposits rank Peru third in the world for extraction, with 1.3 million tons of the mineral mined annually.[25] The nation is also third in the world in silver mining, producing 111.3 million ounces each year.[26] The desire to maintain this favorable international ranking affects, to a large extent, the legislative agenda of Humala, much as it influenced his predecessors.

President García featured tax cuts in his administration. From 2007 to 2011, total tax receipts fell from 20.6 percent to 14.9 percent while FDI dramatically grew. Yet, in spite of the reduction in tax revenues, regional and local governments have been able to accumulate billions of soles in reserves for their jurisdictions. Legislators could have appropriated resources towards the development of “water treatment, roads, education [or] health care,” but unfortunately they have not.

Vehement displeasure with departmental and national legislators has inspired violence which has resulted in over 2,300 injuries and close to 200 deaths. [27] When indigenous opposition mounted against the Santa Ana silver mine owned by Bear Creek Mining Corporation in April of 2011, protestors declared their objections to continual contamination of the water supply and the poisoning of agricultural crops.[28] The 4,000-person protest began with barricades preventing access to service roads and escalated to an aggressive march on police at Inca Manco Cápac International Airport near Juliaca, Peru. The assigned police force responded by killing six people and wounding 30. Protestors responded by burning tires and throwing rocks at police.[29]

Tragic stories such as these are abundant among the isolated communities throughout the Andes region, which suffer as a result of toxic drugs and violence. In the May 2014 monthly summary of recent social conflicts, released by the Defensoría del Pueblo, 100 of 135, or 74.1 percent, of the cases related to inflammatory activities at the mines.[30] The evidence indicates that violence is still rampant under Humala’s presidency, and the frequent uprisings result from disagreements between transnational corporations, laborers, community groups, and activists. Protestors often contest the perpetual contamination of water and soil, but are all too often dismissed in favor of the value of ore.

A growing opposition has set the pursuit of precious metals against the need for clean, drinkable water. For his part, President Humala counters that citizens may enjoy wealth from ore extraction, as well as clean water. Yet mining uses reservoirs for cooling processed materials causing contaminants to seep into the soil causing biological destruction. [31] The present requirements are inadequate and emphasize the importance of metal extraction to the economy. Mining reforms mandating more rigorous water purification processes would draw Peru closer to the standards of its neighbors.

According to the Blacksmith Institute, mining produces the third highest level of toxic pollutants of all global industries.[32] Mercury, a byproduct of gold refining, has poisoned 20,000 hectares of Peruvian rainforest.[33] Recent studies of the southeastern region of Madre de Dios, renowned for its abundance of gold, revealed that 80 percent of all adult inhabitants had toxic levels of metal in their systems.[34]

Another lethal hazard affecting mining communities is lead, which seeps into the water supply and soil, and even floats in the air.[35] A 2009 study by the Carnegie Institute for Science (CIS), in partnership with the World Health Organization (WHO), discovered toxic residues near mining towns in unsettling quantities. As CIS stated, “[O]ur assessment that 1.6 million people in Peru could be exposed to lead in soil indicates that political will and resources are urgently needed to reduce the effect of exposure on the cognitive development of future generations.”[36] Ernesto Ráez-Luna, an Advisor to the Ministry of the Environment, reiterated this concern warning that continuous exposure to pollutants would lead to members of local communities “having an IQ that is five, 10 or 15 points lower than they would have had in optimum environmental conditions.”[37]

While many ecological studies are dismissed in favor of economic policy, Peru’s Minister of Environment, Manuel Pulgar-Vidal, emphasized the value of this type of research, declaring that it is “fundamental for decision makers in order for them to take action and make policies that aim to preserve the sustainable use of these resources and services.”[38] Peru has embraced the prosperity brought by mineral extraction, yet remains irresponsible with poisonous toxins generated from mining worksites. Instead of reaping the benefits of trickle-down economics, communities closest to the mines suffer from trickle-down contamination.

The Minas Conga project in Cajamarca, Peru embodies the heated dispute of minerals versus water. This transnational venture is a partnership between Newmont Mining Corporation, Buenaventura, and the World Bank.[39] It is a $4.8 billion USD example of how economists envision implementation of the PFTPA. Newmont, based in Denver, owns a 51 percent stake, with Peruvian partner Buenaventura owning 43 percent, and the World Bank holding the remaining balance.[40]

Approximately 17,000 people find themselves downstream from the massive operation, which predicts over $10 billion USD in extractive revenues over the next 20 years.[41] Local opponents worry amalgamation will continue to contaminate natural water sources. They fear another spill similar to the one by a Newmont sub-contractor in June 2000, which dumped 335 pounds of liquid mercury onto a highway leading to a worksite.[42] To alleviate this concern, Newmont agreed to build four reservoirs to ensure clean water throughout the existence of the new mine.[43] However, in spite of the financial commitments made by the Newmont consortium, they lack public support for the Minas Conga project, as violent protests led to a halt in construction in 2011.

Peru’s tremendous economic growth in recent decades stands in stark contrast to the continual suffering of the communities near mineral extraction sites. Relaxed permitting requirements for mining projects, loose tax regulation, and a general disregard for environmental violations have hurt rather than helped Peru’s mining communities.

The urgent need to increase mining oversight is clear. The relentless pursuit of foreign investment requires greater regulation to halt the contamination of soil and water. In particular, the extended exposure to mercury, lead, and other hazardous byproducts of the trade continue to poison many of those living locally. Exploited citizens and laborers protesting working conditions have grown defiant, leading to hundreds of violent incidents over the past 25 years. Pollution caused by unlicensed artisanal mining further complicates these issues.

While President Humala campaigned on an anti-mining platform, he has become still another champion of neoliberal economic policy in line with his predecessors Fujimori, García, and Toledo. Unless he is able to tighten the screws on the ensuing pollution, expand licensure, and curb violence, his legacy will be that of willful negligence and the side effects of irresponsible exploitation will remain a blight on the country’s economic achievements.