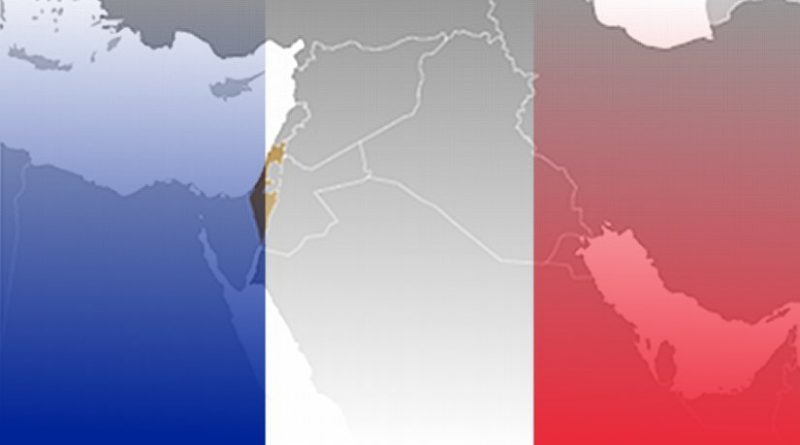 FOR ME, France is the land of liberty.

When I was just 10 years old, I fled with my family from Nazi Germany to France, on our way to Palestine. We were afraid of being detained at the border. When our train crossed the Rhine, leaving Germany behind us and entering France, I breathed deeply. From tyranny to liberty, from hell to paradise.

I never forgot this feeling. Whenever I visited France, it came back to me.

I remembered it again this week, when I saw a much-toted TV “investigative report” on “Anti-Semitism in France”. It was a pile of propaganda nonsense.

“ANTI-SEMITISM IN France” is now all the rage in Israel. A huge propaganda effort is invested in this campaign. The aim is to induce French Jews to come to Israel, to “make aliyah” (an atrocious corruption of Hebrew).

Jews in France, according to “investigative reports” are faced with a terrible danger. They can expect a second holocaust any moment. They are attacked in the streets. They are afraid to wear kippahs in public. For their children’s sake, they must come to Israel. In a hurry. Now!

When I started watching the TV story more closely, I noticed one peculiarity: almost all the male Jews interviewed wore a kippah. Strange. I hardly ever met a kippah-wearing French Jew.

Then I noticed another peculiarity: it seemed to me that all the Jewish interviewees looked North African. In particular, Algerian.

Also, all the violent incidents mentioned were caused by Muslims. They did not take place on the Avenue des Champs-Élysées , but in the banlieues, where poor North African Muslims live crowded together with poor North African Jews.

Why are these incidents happening? Why there? And what have they got to do with French anti-Semitism?

WHEN I hear about “French anti-Semitism”, I see in my imagination the long tradition of Christian France’s aversion to Jews. Even after the French Revolution, which liberated the Jews too, there was a lot of anti-Semitism in France. One has only to recall the Dreyfus affair at the end of the 19th century, when a French Jewish army officer was falsely accused of being a German spy and sent to Devil’s Island in French Guiana. Masses of Frenchmen marched along the Champs-Élysées, shouting “Death to the Jews!” One spectator was a Jewish journalist from Vienna, named Theodor Herzl, who drew the conclusion that all the Jews must leave Europe and establish a state of their own in Palestine. Zionism was born.

This kind of Christian anti-Semitism, emanating (I believe) from the New Testament story about the death of Jesus, always existed in France, as it did in most other Christian countries. Since the Holocaust, it has become a fringe phenomenon. I believe that this is so in France, too.

THE MUSLIM-JEWISH animosity which is now being played out in the Paris banlieues is something entirely different, and has nothing to do with anti-Semites. It so happens that both sides are Semites.

It started in Algeria a long time ago. The French conquered the country and settled there in large numbers. Then they did something rather clever: they conferred French citizenship on the local Jews, but not on the Muslims, who constituted the vast majority. As the ancient Romans used to say: “Divide et Impera”.

When the Algerian War of Independence broke out (in 1954), the Jews, being proud French citizens, sided with the oppressor against the oppressed.

More than that. When the French army showed signs of wanting to leave, the settlers set up an underground military organization, the OAS, to terrorize the Muslims. The local Jews were involved. Gradually, the French settlers started to return to France, and the Jews remained, the OAS then becoming almost a Jewish organization.

I was somehow involved. The Algerian liberation organization, the FLN, feeling that victory was near, was very concerned that the Jews would leave Algeria. Since the Jews played a large role in Algerian economic and intellectual life, the FLN leaders feared that such an exodus would be a great loss to the emerging state.

They approached me with the request to set up an organization in Israel to support Algerian independence. When I set up the Israeli Council for Algerian Independence, they asked us to publish material in Hebrew, which they translated into French and distributed among the Jews.

To no avail. In the end, Charles de Gaulle set a date for the French army’s withdrawal, more than a million French settlers fled almost overnight to France, and with them practically all the Jews.

Algerian Jews did not come to Israel. They were too well integrated in French culture. Moroccan and Tunisian Jews split: the educated went to France, all the others came here.

What is happening now is the continuation of that Algerian conflict on French soil. The hatred that once ruled the streets of Algiers and Oran is being fought out in the streets of Paris and Marseilles.

Tragic? Indeed. Sad? Certainly. Anti-Semitism – not at all. It has nothing to do with this old European scourge.

I have seen no such statistics, probably because France insists that there is no difference between Frenchmen and women of all colors, creeds and races.

French neo-Fascism, led by the very able Marine Le Pen, is entirely centered on hatred of the Muslims, while doing everything possible to flatter the Jews. Some Jews are even active in her party. She admires us, she loves us, she even threw her own father out because he could not restrain himself from uttering phrases that reflected some residual anti-Semitism.

SO WHERE is the present scare of French anti-Semitism coming from?

Ah, there are several good reasons.

Basically, Zionism and anti-Semitism are twins. It is modern European anti-Semitism that created modern Zionism. As mentioned, Herzl turned into a Zionist when he saw the (French) anti-Semites. My family came to Palestine because of (German) anti-Semitism. So, more or less, did all the Israeli Jews.

One could say that if anti-Semitism did not exist, the Zionists would have had to invent it.

According to Zionist ideology, the State of Israel exists as a refuge for persecuted Jews. Wherever Jews in the world are in distress, we save them and bring them here. (Never mind that Israel is perhaps the least safe place for Jews in the world.)

When anti-Semitism is too weak to do the job, we must help it along, as we did in Iraq in 1952, when we planted bombs in synagogues to encourage Jews to leave and come here.

Seems that just now there is a dearth of anti-Semitism. Russian Jews don’t come anymore, nor do American ones. So France must fill the gap.

There is also a more cynical explanation. Israel has built an elaborate apparatus for bringing Jews here. There are immigration officers in Israeli embassies. There is the Jewish Agency, a worldwide organization devoted mainly to bringing Jews to Israel. What would happen to all this host of emissaries, organizers, bureaucrats, political appointees and such if there were no Jews aspiring to come here and kiss the ground on arrival?

Fortunately there is this “wave of anti-Semitism” in France, and everybody is fully occupied. Politicians make speeches, journalists produce emotional “investigative” series, the Zionist soul is stirring, Zionism is in full swing. Planes full of kippah-wearing Jews arrive. Hallelujah!

WHAT HAPPENS to all these immigrants “making aliyah” once they come here.?

That is a good question. Some bureaucrats are charged with dealing with them. We have an entire ministry devoted to “immigrant absorption”. (It is arguably the least desired job for a politician, a kind of parking space until something better comes along.)

Once the new immigrants are here, many devoted Zionists seem to lose interest in them. Practically all immigrants from Islamic countries since the birth of the state, they and their descendants, now complain of having been discriminated against.

The problem is now at the center of a lively debate. A committee led by a blind Oriental poet has just issued a vast report, demanding that all history books be rewritten to make place for Oriental Jewish politicians, rabbis, artists and writers, on a basis of parity with Jews of European descent.

Semi-official estimates are that about 30% of the new “French” immigrants will eventually return to France. That seems to be accepted as normal.

But if 70% remain with us, that is a net gain. Bienvenue, mes amis!