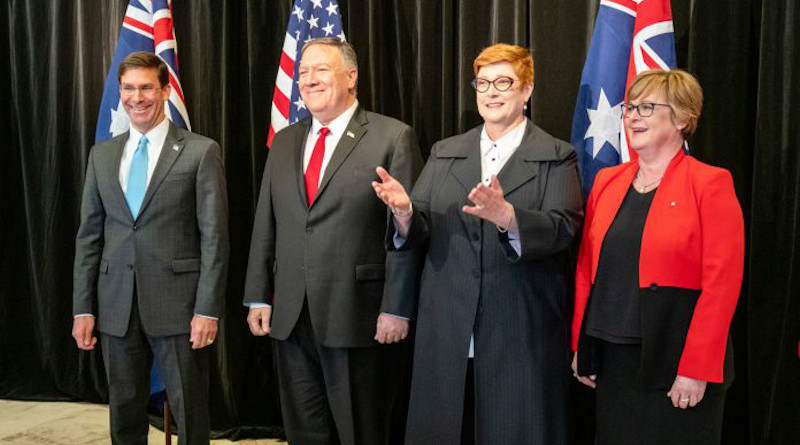 The recent speech by Australian Foreign Minister Marise Payne was an implicit message to the United States — Australia and the Indo-Pacific region can no longer wait for its leadership. Australia has signalled to the region and the next US administration that it is prepared to lead by example while the United States gets its house in order.

At the heart of Payne’s address was a policy announcement about the importance of multilateralism and the role international institutions should play in global crises like COVID-19.

Payne’s speech was an explicit signal to China about an alternative vision for the region. It called out China on its disinformation campaigns aimed at undermining democracy in the region and Australia’s economy by warning Chinese students to reconsider Australia as an education destination.

But more importantly, the speech didn’t mention the United States.

This is a departure from the approach taken by Payne’s predecessor, Julie Bishop, whose 2017 landmark address on ‘Change and Uncertainty in the Indo-Pacific’ was aimed directly at the United States. Bishop’s speech was also an important message delivered at a critical time. Australia and the region were looking for a sign of leadership from the new Trump administration.

But it appears that after three years these calls have gone unanswered.

Since then, the Trump administration has chosen to shake down alliance partners in an effort to get them to contribute more to their security. And given that the ANZUS (Australia, New Zealand and the United States) alliance remains fundamental to Australia’s security, the last thing Australia wants to do is offend the temperamental Trump administration by calling it out again.

Australia has proposed an alternative vision of leadership for the Indo-Pacific that strives to protect the multilateral system in the absence of US leadership and in the face of China’s revisionist agenda. This vision looks like the last few decades of US leadership but emphasises, for the time being, collective leadership by small and middle powers as the gatekeepers of the rules-based order.

This type of leadership approach fits the appetite of Australia’s immediate region. It’s as if this leadership vision was lifted from the website of multilateral institutions such as ASEAN which has underpinned peace and prosperity in Southeast Asia and thus Australia for decades.

Australia has determined that the best way to promote and protect Australia’s interests is to preserve, and bring its influence to bear on, multilateral institutions which have always been an important diplomatic amplifier of Australia’s foreign policy.

But it remains to be seen whether Australia yields the same influence it once had on the international stage without the United States. Australia and its like-minded small and middle power neighbours will have less resources to wield instruments of national power to navigate the post-COVID-19 world unscathed from great power competition.

While Australia has committed AU$575 billion (US$400 billion) over the next decade, including AU$270 billion (US$188 billion) in capability investment to defend Australia, Australia’s Prime Minister Scott Morrison admits that this won’t match the capabilities in Australia’s region. Rather, this will only be enough to deter attacks against Australia and its interests.

But there has been no similar commitment to boost the funding of Australia’s Department of Foreign Affairs and Trade (DFAT), which facilitates most of Australia’s engagement in the region, especially with multilateral institutions.

Like Australia’s strategic environment, Australia faces an increasingly contested foreign policy environment in the Indo-Pacific over the next decade. Without an increase in resources to boost Australia’s diplomatic influence, it remains unclear how Australia will fulfil its leadership ambitions — let alone shape the region in its favour.

At best, Australia might be able to maintain a strategic holding pattern in the event of another inward-looking US administration. But whether Australia’s idea of the rules-based order in the Indo-Pacific survives the post-COVID-19 world will still ultimately depend on the leadership of the great powers going forward. Most importantly, the United States.

So, curb your enthusiasm.

*About the author: Bradley Wood is a research officer at the Strategic and Defence Studies Centre, the Australian National University.

Home » Australia’s Vision Of Leadership In The Indo-Pacific – Analysis