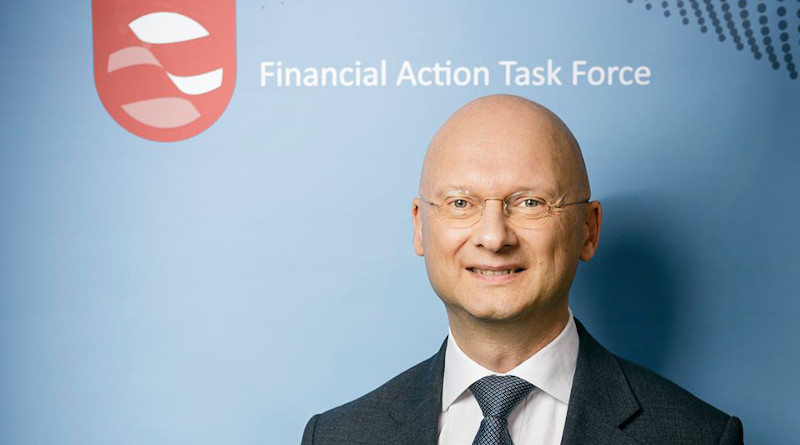 Germany has taken over from China as the new president of the Financial Action Task Force (FATF). Will it be the one to put Pakistan on the black list – or will realpolitik and national agendas prevail, with terrorism financing continuing to flourish?

On 1 July 2020, Marcus Pleyer of Germany assumed the presidency of the Financial Action Task Force (FATF), becoming the first to hold the presidency under the newly instituted two-year term. He took over the position from Xiangmin Liu, Director General of the Legal Department at the People’s Bank of China, China’s Central Bank. Pleyer, Deputy Director General in Germany’s Federal Ministry of Finance, has dealt with money laundering, counter terrorism financing, cyber security and international financial markets.[1]

Due to the COVID-19 crisis, the final plenary session under the Chinese presidency was held virtually on 24 June 2020. Its agenda included the FATF report on money laundering from the illegal wildlife trade; the review of FATF’s requirements of the fast expanding cryptocurrency industry; developments in the financing of ISIL, Al-Qaeda and affiliates[2].

FATF is the world’s watchman for anti-money laundering (AML) and countering the financing of terrorism (CFT). It sets the norms for fighting these crimes and getting countries to abide by polices to improve their legal systems. The FATF’s Recommendations, or FATF Standards, result in the ‘coordinated global response to prevent organised crime, corruption and terrorism.’[3] It continuously reviews the methods used for terrorist financing and money laundering. Being blacklisted by the FATF is a serious issue for countries.

Eight of FATF’s 37 members are from Asia. India is a member, but Pakistan, which has been in the cross-hairs of the FATF since 2012 for not abiding by all the norms on terrorism financing, is not. Pakistan has appeared twice on the FATF grey list since 2018. In the plenary meeting on 24 June, chaired by China, Pakistan’s presence on the grey list was extended till October 2020.[4] As the COVID-19 crisis prevented any major discussion on the list of countries expected to comply with the 27-point action plan on CFT/AML, countries on the high-risk jurisdictions (the black list) and the enhanced monitoring list (the grey list) will remain on those lists till the next meeting, i.e. in October.

Since October 2019 Pakistan has been given two extended periods to show compliance. Though these periods expired by the time of the June meeting, the advent of COVID-19 has helped Pakistan escape tighter scrutiny, despite their record remaining short of expectations.[5]

As of 21 February 2020, Iran and North Korea are the only two countries on the black list. The grey list has 18 countries.[6] Pakistan is still under close observation.[7] While India, the U.S. and U.K. maintain that Pakistan should be included in the black list of FATF, they are continuously opposed by China and Turkey.

Can Germany’s presidency make a difference? As the Germans are sticklers for rules, they are expected to hold Pakistan’s feet to the fire on compliance. Pakistan will feel harsher scrutiny considering that it has complied with just five out of 27 issues.

Germany will be backed by the Asia/Pacific Group on Money Laundering (APG), an associate member of FATF, with 41 members[8] including Pakistan, which has found Pakistan lacking in compliance in 10 out 11 parameters and lacking in efficacy in 32 of 40 parameters,[9] in August 2019. At the APG meeting in January 2020 in Beijing, China announced that Pakistan had considerably improved its compliance.[10] As the APG report normally precedes the FATF meetings, this helped to keep Pakistan on the grey list at the FATF 21 February 2020 meeting.[11] And COVID-19 has given Pakistan considerable cover: The annual meeting to be held in Dhaka in July 2020 has been cancelled due to the pandemic and this will keep the report on Pakistan unchanged.

The German priorities for its presidency are: Digital Transformation of AML/CFT; Financing of ethnically or racially motivated terrorism; Money laundering and migrant smuggling; Environmental crime and illicit arms trafficking.[12] It is committed to ‘FATF’s core work of continuing to identify and analyse money laundering and terrorist financing methods and trends, developing and refining the FATF Standards and evaluating and supporting the evaluations of countries globally.’[13]

However, Germany also realises it must keep running the FATF in its term without controversy – which means Pakistan could escape penalty yet again. Two factors are likely to keep Pakistan on the grey list. First, the Germans will continue to believe that Pakistan has not broken international engagement like Iran or North Korea so long as Pakistan keeps up minimal compliance and remains responsive. Secondly, the value that Pakistan holds in the Afghan settlement through its links with the Taliban are a cause of FATF worry but provides solace to the U.S. and Germany, in their search for peace in Afghanistan. Being among the 6 co-facilitators of the Comprehensive Peace Agreement (CPA) between the U.S. and the Taliban, Germany will not lose sight of Pakistan’s influence in Afghanistan, even though it would like greater compliance on FATF.

Thus, there seems to be little chance of Pakistan being blacklisted in the two German presidency years. India, which continues to suffer from Pakistani funded-terrorism even as COVID-19 rages, along with other like-minded countries should keep the pressure on Pakistan. By using the peer review process to consistently point out violations and the systemic flaws in Pakistan’s engagement it must press the German presidency to action.

*About the author: Gurjit Singh is a former Indian Ambassador to Germany. He is currently the Chair of the CII Task Force on the Asia Africa Growth Corridor and Professor at the IIT, Indore.

[7] Pakistan’s actions in addressing deficiencies in its AML/CFT system: All deadlines in the action plan have expired. While noting recent and notable improvements, the FATF again expresses concerns given Pakistan’s failure to complete its action plan in line with the agreed timelines and in light of the Terror Financing risks emanating from the jurisdiction. To date, Pakistan has largely addressed 14 of 27 action items, with varying levels of progress made on the rest of the action plan. The FATF strongly urges Pakistan to swiftly complete its full action plan by June 2020. Otherwise, should significant and sustainable progress especially in prosecuting and penalising Terror Financing not be made by the next Plenary, the FATF will take action, which could include the FATF calling on its members and urging all jurisdiction to advise their FIs to give special attention to business relations and transactions with Pakistan.