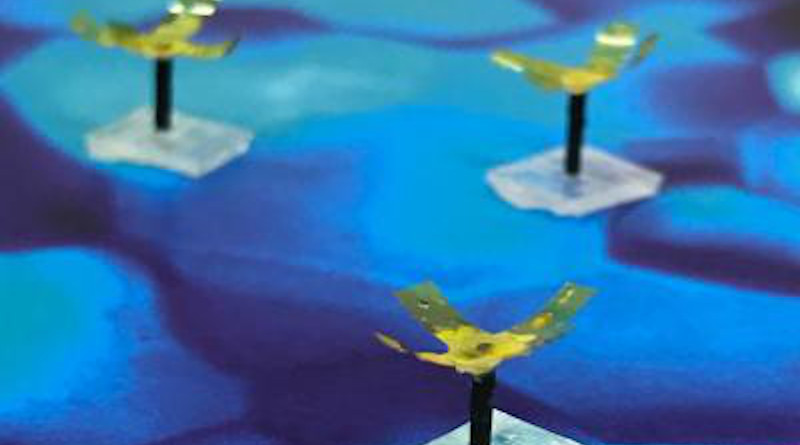 Researchers at Eindhoven University of Technology developed a tiny plastic robot, made of responsive polymers, which moves under the influence of light and magnetism. In the future this 'wireless aquatic polyp' should be able to attract and capture contaminant particles from the surrounding liquid or pick up and transport cells for analysis in diagnostic devices. The researchers published their results in the journal PNAS. CREDIT: Marina Pilz Da Cunha

Inspired by a coral polyp, this plastic mini robot moves by magnetism and light.

Researchers at Eindhoven University of Technology developed a tiny plastic robot, made of responsive polymers, which moves under the influence of light and magnetism. In the future this ‘wireless aquatic polyp’ should be able to attract and capture contaminant particles from the surrounding liquid or pick up and transport cells for analysis in diagnostic devices. The researchers published their results in the journal PNAS.

The mini robot is inspired by a coral polyp; a small soft creature with tentacles, which makes up the corals in the ocean. Doctoral candidate Marina Pilz Da Cunha: “I was inspired by the motion of these coral polyps, especially their ability to interact with the environment through self-made currents.” The stem of the living polyps makes a specific movement that creates a current which attracts food particles. Subsequently, the tentacles grab the food particles floating by.

The developed wireless artificial polyp is 1 by 1 cm, has a stem that reacts to magnetism, and light steered tentacles.

“Combining two different stimuli is rare since it requires delicate material preparation and assembly, but it is interesting for creating untethered robots because it allows for complex shape changes and tasks to be performed,” explains Pilz Da Cunha.

The tentacles move by shining light on them. Different wavelengths lead to different results. For example, the tentacles ‘grab’ under the influence of UV light, while they ‘release’ with blue light.

FROM LAND TO WATER

The device now presented can grab and release objects underwater, which is a new feature of the light-guided package delivery mini robot the researchers presented earlier this year. This land-based robot couldn’t work underwater, because the polymers making up that robot act through photothermal effects. The heat generated by the light fueled the robot, instead of the light itself.

Pilz Da Cunha: “Heat dissipates in water, which makes it impossible to steer the robot under water.” She therefore developed a photomechanical polymer material that moves under the influence of light only. Not heat.

And that is not its only advantage. Next to operating underwater, this new material can hold its deformation after being activated by light. While the photothermal material immediately returns to its original shape after the stimuli has been removed, the molecules in the photomechanical material actually take on a new state. This allows different stable shapes, to be maintained for a longer period of time.

“That helps to control the gripper arm; once something has been captured, the robot can keep holding it until it is addressed by light once again to release it,” says Pilz Da Cunha.

By placing a rotating magnet underneath the robot, the stem circles around its axis (see video). Pilz Da Cunha: “It was therefore possible to actually move floating objects in the water towards the polyp, in our case oil droplets.”

The position of the tentacles (open, closed or something in between), turned out to have an influence on the fluid flow. “Computer simulations, with different tentacle positions, eventually helped us to understand and get the movement of the stem exactly right. And to ‘attract’ the oil droplets towards the tentacles,” explains Pilz Da Cunha.

OPERATION INDEPENDENT OF THE WATER COMPOSITION

An added advantage is that the robot operates independently from the composition of the surrounding liquid. This is unique, because the dominant stimuli-responsive material used for underwater applications nowadays, hydrogels, are sensitive for their environment. Hydrogels therefore behave differently in contaminated water.

Pilz Da Cunha: “Our robot also works in the same way in salt water, or water with contaminants. In fact, in the future the polyp may be able to filter contaminants out of the water by catching them with its tentacles.”

PhD student Pilz Da Cunha is now working on the next step: an array of polyps that can work together. She hopes to realize transport of particles, in which one polyp passes on a package to the other. A swimming robot is also on her wish list. Here, she thinks of biomedical applications such as capturing specific cells.

To achieve this, the researchers still have to work on the wavelengths to which the material responds. “UV light affects cells and the depth of penetration in the human body is limited. In addition, UV light might damage the robot itself, making it less durable. Therefore we want to create a robot that doesn’t need UV light as a stimuli,” concludes Pilz Da Cunha.

This research was published in PNAS magazine.