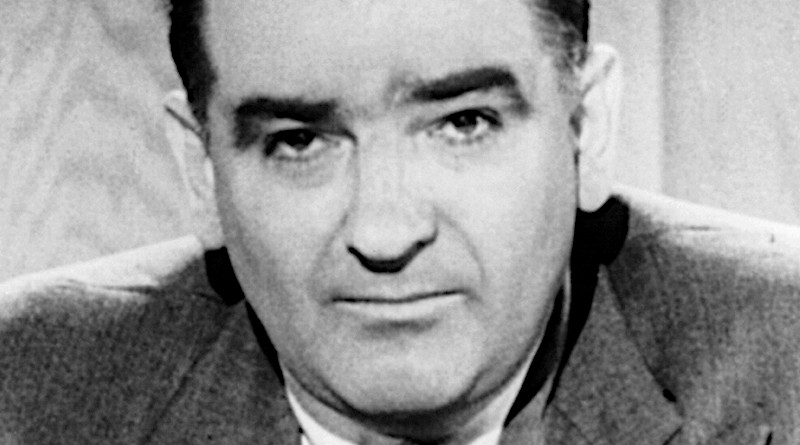 McCarthyism has become synonymous with the practice of making accusations of subversion or treason without proper regard for evidence. It was a dark period in U.S. history that began in 1947 and ran through much of the 50s, leaving behind it a scarred and weaker America. It appears we are, once again, on the cusp of repeating past mistakes.

Widely seen as a response to the Second Red Scare, the hunting out and public naming of suspected Communists did not begin with Senator Joseph McCarthy’s brandishing of paper at a West Virginia women’s club, where he stated:

“I have here in my hand a list of 205 – a list of names that were made known to the Secretary of State as being members of the Communist Party and who nevertheless are still working and shaping policy in the State Department.”

In fact, the precursor came from Democrat President Harry S. Truman’s Executive Order 9835, which mandated that all federal employees be screened for their “loyalty.” It required that those who work for the government should not be involved with organizations that the attorney general deemed “totalitarian, fascist, communist or subversive.” The mission was to ensure that those who worked in government were not trying to undermine it actively.

One would think that McCarthyism was a trend we all would rather not revisit. Yet, the same tactics and denouncements are once again being embraced by zealots who seek to instill fear in honest folks.

We appear to have a new Red Menace to contend with, and once again, leaders within nations are marshaling their forces to fight the enemy. This time around, however, the “enemies” are those who believe in the Constitution and desire freedom from state-sanctioned tyranny.

We see members of the Hollywood elite blacklisted from work, banned from expressing their views on social media platforms, and denigrated publically for their supposed “wrongthink.” But it is not just the lords and ladies of the Silver Screen who fall victim to this new overarching orthodoxy.

Regular people, expressing their opinions in a public forum, are being threatened, bullied, doxxed, fired, and ostracized. Even worse, thousands of people are being investigated and harassed by the police and made criminals.

In the United Kingdom, it appears the easiest way to silence a dissenting opinion is to accuse someone of a hate crime. The police recording of “hate crime incidents” has increased dramatically over the last several years, leaving many with permanent stains on their records that limit future employment opportunities and can seriously damage personal relationships. But here’s the thing: according to police in the U.K., a hate crime or hate incident is defined as:

“[A]ny incident which the victim, or anyone else, thinks is based on someone’s prejudice towards them because of their race, religion, sexual orientation, disability or because they are transgender.”

So if two friends or family members of different races argue with one another, a complete stranger who witnesses the exchange can report it to the police as a hate incident. At least one of the “transgressors” will then be approached by the police and have a “hate crime incident” placed on their permanent record.

More than 100,000 such cases are registered each year. According to 2017/18 statistics, 74% of these cases were not prosecuted. While a lack of evidence or an inability to identify a suspect prevented prosecution in most cases, the alleged instigators nonetheless have the accusation of one of these so-called crimes on his or her record.

While some of these instances are, indeed, crimes worthy of punishment with the full force of the law, it seems that an increasing percentage is little more than someone taking offense at a tweet or a YouTube video. In fact, around the time of the E.U. referendum, Nigel Farage was accused of numerous hate crimes under these poor and tyrannical laws for giving speeches in the European Parliament.

Living In Fear Of Unacceptability

But what does all this have to do with McCarthyism? Well, people are living in a state of low-level fear. They will not advocate for the causes they feel are just. They will not join organizations – legitimate political parties – for fear of being tainted with the brush of social unacceptability. Most importantly, when faced with the full force of the state – bolstered by a loud but powerful minority of angry and vindictive voices – they will not fight. And this is the endgame.

In 1867, John Stuart Mill said that “Bad men need nothing more to compass their ends, than that good men should look on and do nothing.” This phrase, later attributed to Edmund Burke as: “The only thing necessary for the triumph of evil is for good men to do nothing,” is the breaking point for society. When all good men fear the retribution of state actors and zealous idealogues for expressing as simple a truth as two plus two equals four, we face a danger that eclipses even that of the McCarthyist purges. We face the loss of our uniqueness as human beings.

Revolutions and coups have terrible consequences: lives are taken, property is stolen, people are tortured, and rights are denigrated. But all this happens in the aftermath. Preceding these events is the silencing of opposition by those who seek to steal power from the individual. If you can’t speak, you can’t complain about the steady encroachment on your freedoms.

It is the “subversive” words that will ensure freedom for future generations. And it is outside the Overton window where life and liberty thrive.