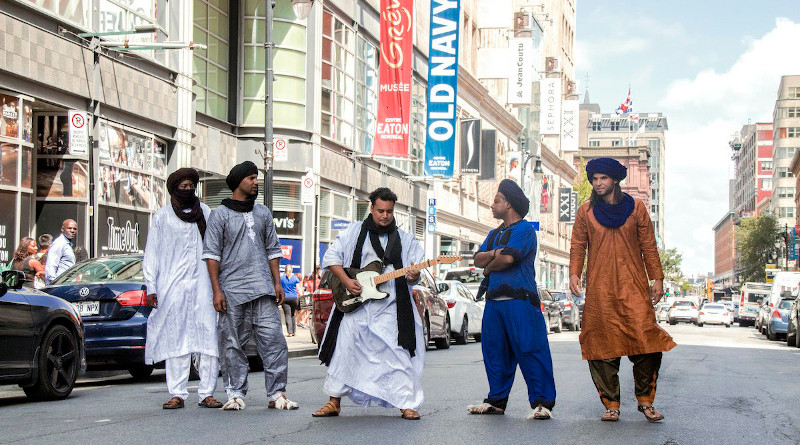 As band origin stories go, Moroccan five-piece Daraa Tribes has one that borders on the romantic. The group, which plays music its members refer to as “the blues of the desert,” formed in 2014 and is made up of five friends — lead vocalist Balkhir Razgui, lead guitarist Rachid Berazougui, bass guitarist Abdelkebir Saadi, rhythm guitarist Mustapha Aqermim and percussionist Hafid Ami.

“We live in the same neighborhood in Tagounite,” Aqermim tells Arab News. “But things happened spontaneously. We didn’t plan to start a band. We just started playing together and we began to notice that there was something special happening.”

The Daraa Valley, the longest in Morocco, is home to a many different tribes, and the peaceful coexistence that Aqermim says typifies his and his bandmates’ lives (all five are from different tribes) is a big part of the reason the group began playing together. “We grew up together in the same area, the same streets,” he explains. “We grew up in the same atmosphere. When you hear about places experiencing tribal war, or differences between people who are black or white, who belong to one tribe or another, and who believe they are better than one another… this does not exist in Tagounite.”

The ‘blues of the desert’ took shape as the bandmates shared the traditional musical styles of their individual tribes with one another. Named for the collaborative characteristics of their home as well as their music, Daraa Tribes were keen to share their sound, and their message. But in order to do that, they needed to look outside of the valley.

“If you want to start playing gigs, you need music,” says Aqermim. “Thomas, our manager, played a very big role and helped the band a lot at the beginning because we would record on his computer.”

Thomas Duncan had come to Tagounite with the United States Peace Corps, and was the first volunteer placed in that part of Morocco.

“Because of Mustapha’s English, he was the first person I met and we quickly became friends,” says Duncan. “He introduced me to the other guys. At that point, they weren’t really a ‘band,’ they were just a group of friends playing music. Through the Peace Corps, we did a project to get instruments, so that they could hold a music club and teach kids at the youth center. After that, with access to instruments every day, they played more and developed their own rhythm as a band.

“As I got to know them more, and as they expressed their unique musical heritages, it opened up this whole musical world that I, as an American from Washington DC, had never really seen before.”

With five members from five different tribes (Aqermim is from the Amazigh, Berazougui from Aarib, Ami from Lkaaba, Saadi from Regaga, and Razgui from Gnawa), expressing that musical heritage means blending and fusing (sometimes extremely) different styles. Part of that early kinship that the band experienced, Aqermim points out, was how such a potentially conflicting process turned out to be pretty seamless.

“Each member of the band has his own style of traditional music,” he explains. “Each style is different, but when we choose one to play, we all play together. So for example, if I choose to bring a song from my tribe, we talk about it together, and when we are writing songs, we talk constantly about whether something is good or not, and whether it works. We do everything as a group.”

Daraa Tribes recorded some basic demos on Duncan’s computer, and used those to land gigs at local festivals — the first of which was Taralgate, a Moroccan festival which has seen artists such as Grammy-winning Tuareg band Tinariwen, whose music has also been described as a blend of blues and African music, grace the stage.

“Every year since 2014 and 2015, the band has progressed professionally,” Duncan says. “In the last three years, they’ve done international tours, and had albums professionally recorded.”

Daraa Tribes have so far released a pair of EPs (2017’s “Alwan” and 2019’s “Zamane”) and a full-length album (2018’s “Igharman”) through French label In Ze Box. And the band’s close relationship — rooted in their lifelong friendships — stood them in good stead on the road when they first began to experience large stages and large crowds.

“The fact that we were a family before we were musicians in a band helped us a lot,” says Aqermim. “Before we would go on stage, we would help each other to relax. We would tell each other how this was our opportunity. It was the opening of a door. And we had spent a lot of time practicing, to make sure that we work with the audience. The people were amazing — they give you energy and you have to work with them.”

Audiences reacted well, attracted at first (Aqermim jokes) to the band’s bright clothes, before being won over by the eclectic musical styles and energetic performances. In 2019, Daraa Tribes went on a European tour, adding the Netherlands, Spain, France, Belgium and the UK to a list of international gigs that already included Canada and Russia.

The group was supposed to be on the road again in 2020, but global travel restrictions called for a rethink. Following a well-received performance in 2019, the group was invited back to play the Liverpool Arab Arts Festival (held digitally last month), and ended up performing a live-streamed show as the festival’s closing slot via Facebook.

Thankfully, most of the group’s 2020 plans look set to be simply pushed back by a year. In the meantime, they have been working on a new album called “Torat” — which means ‘heritage’. Based on the warm welcome they’ve received thus far, the band’s music clearly resonates with international audiences. Aqermim believes the reason Daraa Tribes has proved so popular is actually pretty straightforward.

“People love to see different things, they want to learn about different stories. And when we tell people about our story — about the valley, about the tribes, about everyone living in peace and love, making music of our own without trying to imitate anyone else — they get to learn about our heritage.”

That message — people of different tribes and colors, living together and making music — is a powerful one.