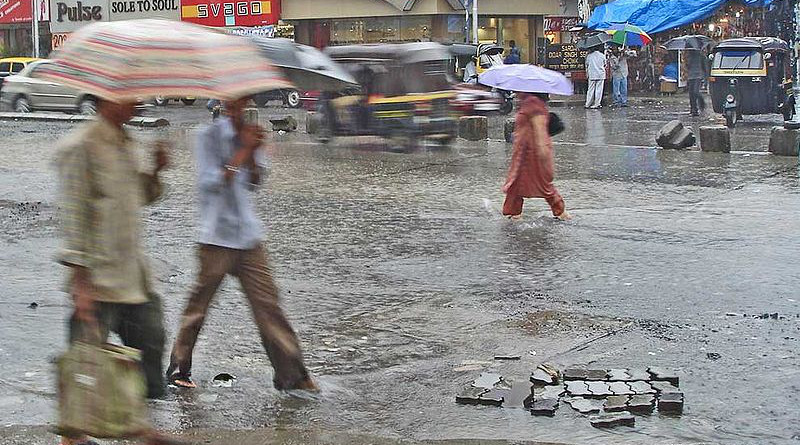 In February, Mumbai hosted a two-day international conference on the theme “Climate Crisis: Action for Tropical Coastal Cities.” This issue is fundamental to the city’s future existence. Mumbai was originally a set of seven islands; like many great port cities around the world, a large chunk of it is land reclaimed from the sea. It also has 3 million people living within a kilometer of the coastline, most of them in informal and highly vulnerable settlements that have no defenses against a combination of flooding and high tide.

Six months later, Mumbai was inundated by a flash flood — the most rain seen in a single day for 46 years. The first two decades of this century have revealed a definite shift in the character of monsoonal rain in Mumbai, which is attributable to climate change.

While Mumbai’s average rainfall has remained substantially unchanged, the distribution of this rainfall over the monsoon season has become much more uneven. Rainfall is now characterized by extreme spikes that condense the precipitation into short periods and overwhelm the city completely. I spent my childhood years in Mumbai praying for flash floods like this every monsoon so that I might get a sudden day off from school. Sadly, it never happened. Not on a weekday, anyway.

In June, the city also experienced a cyclonic storm — its first since 1891. Large-scale destruction was narrowly averted when the storm made landfall just south of Mumbai. The rise in incidence of extreme weather events conforms to the predictions made by climate scientists.

That’s not all. Alongside a different pattern of rainfall, there can also be observed a steady rise in the sea around Mumbai because of the warming of the oceans: About 3 cm a decade (as a point of reference, global mean sea levels rose between 11 and 16 cm in the entirety of the 20th century). Every year, almost invisible to the human eye, the water is slowly rising around Mumbai.

What does this mean for the future of the city? The climate shocks of the present day are not only hugely challenging in themselves, they are also pointers to even greater problems to come. As early as the year 2050, great chunks of Mumbai could be permanently underwater, according to a 2019 report by the US-based climate science group Climate Central. All those people now living on the Mumbai coastline would have to find another place to live.

Great cities have always been marked by great resilience to natural disasters, disease and economic shocks, as well as a spirit of innovation and derring-do. But the onset of anthropogenic climate change may be a challenge that the powers of technology and urban planning cannot solve. And it represents an existential threat to all the coastal cities — such as Mumbai, Kolkata, New York, Shanghai, Manila, and Jakarta — that once stood for the glories of civilization and the triumph of science over nature.

Of course, some cities are trying to plan for the coming crisis, using a combination of engineering solutions and environmental and land use regulations. New York now has its own City Panel on Climate Change — a mayor-appointed body of researchers advising the city’s administration. Shanghai has constructed more than 500 km of sea walls to protect the city from floods. Some urban planners are advocating the idea of a “strategic retreat” by gradually relocating key infrastructure to safer ground and redirecting new development inland.

But can climate action really be implemented in Mumbai? If climate change feels all too real in Mumbai and many other cities of the developing world, on another level it is also unreal — that is, perceived as unimportant and trivial in relation to the issues of livelihood, housing and health that suck up the energies of their denizens and limit their temporal horizons to the next day, week or year.

This state of mind also extends to policy. The need to keep expanding infrastructure and built-up land to accommodate the growing numbers of people in the city, for instance, means that most new development is climate change insensitive. Relentless urbanization blocks up natural waterways and adds large new swaths of concretized surfaces, intensifying the risks of flooding.

Mumbai has its own trajectory of capitalist growth, with a momentum almost as inexorable as that of the changing climate, rendering all good intentions and dire warnings meaningless. Its political class, often bankrolled by builders, is deeply implicated in extracting value from space (while also being willing to organize conferences on climate change). Alongside a new metro, the city’s biggest infrastructure project this decade has been the building of a 35-km-long Coastal Road on reclaimed land in the intertidal zone. For many well-to-do Mumbaikars, climate change is a less significant problem than traffic.

Concerned citizens, nongovernmental organizations, activists, environmentalists and urban planners continue, admirably, to insist there is still a way out for Mumbai. But, just as part of the task of climate science is to assign different levels of probability to its projections, so too must the analysis of politics and society make educated guesses about the probability of social outcomes.

So why mince words? My guess is that Mumbai, so long a byword for urban resilience, will be among the first cities in the world to be completely devastated by climate change. My childhood wish for a flash flood will be realized on a much greater, perverse scale. It will be strange to continue to speak of myself in the present tense, but not Mumbai — the much greater cradle in which I became who I am.