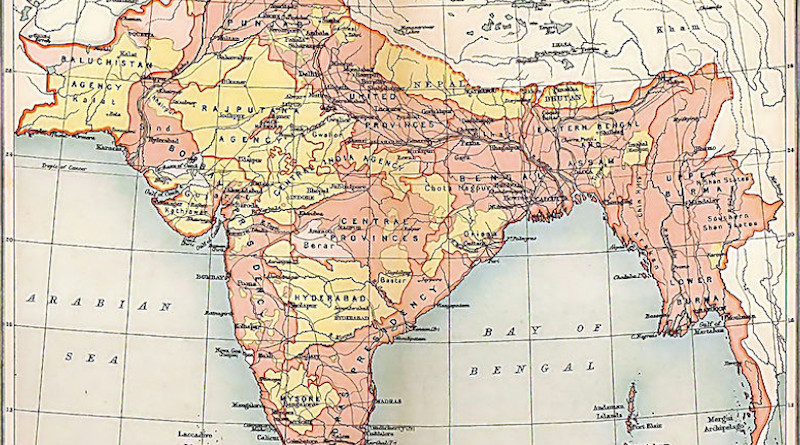 Rich in every aspect, India is a land that has always been coveted by every power and wealth hungry empire and despot. Empires came and went plundering what they could, but it was the wily British who institutionalised it for exploitation.

It was the ‘Jewel in the crown’ of the British Empire, and every effort was made to retain, expand its hold on India.

In 1830  the Muslim Ottoman Empire was visibly in terminal decline and the Russian Empire was in ascendant. The British feared the invasion of India by Russia and the loss of its lucrative trade,

The British lost the four major wars it fought with the Sikhs and the Afghanistan and eventually Afghanistan became a buffer state between the two empires.

Pushed by the Americans  a reluctant Britain had to give up its colonies and set the lands free after the end of the second World War.

Britain now fretted that if they vacated India, because nothing could then stop a victorious and strong Russia confident after its achievements in World War II from simply marching into India.

Britain wanted to retain bases with troops and equipment in India to prevent such an eventuality. Both flatly turned that request down.

On the other hand Muhammad Ali Jinnah an astute man with a much better understanding of geopolitics readily accepted the request unconditionally. He offered the British an unconditional support and bases if they appointed him the first Prime Minister of independent India

There was however, a small problem, Jinnah’s voice had almost no say in the Congress party.  The problem was easily solved, partition India into a Hindu majority Secular India and a Muslim majority Pakistan and appoint the Prime Minister of Pakistan. Pakistan is the area that was contiguous with Afghanistan and where Britain wanted to have bases and troops, thus create an openly pro British buffer state.

The die was cast, now to implement the plan. The British government had given a mandate to Mountbatten to grant India independence by July 1948.

The plan had a problem. British intelligence had reliable information that Muhammad Ali Jinnah was suffering from tuberculosis and unlikely to survive another year.

Then there was the question, ‘what if the people of India and Pakistan decide to reunite?’ After all barring the occasional riot the people of all religions and communities within British India lived in relative harmony.

So not only was partition essential to post independence British plans but to do so in such a manner that they would remain bitterly divided for a long time.

The demarcation of the boundary between India and Pakistan was given to two teams of eminent lawyers uninformed, unadvised and unsuitable for the great task as boundary commissions. The notorious and ill fated demarcated line came to be known as the Radcliffe line

Sir. Cyril Radcliffe an English lawyer was summoned and assigned the job of trisecting most of India. He was appointed chairman of the two  boundary commissions (One for Bengal and one for Punjab).

It is shocking to know, that Radcliffe had never visited India earlier, never read about or studied India until he was assigned the task. He was given just 5 weeks to complete the assignment. Arriving in India on July 8th 1947 he spent two weeks in bed recovering from ‘Delhi Belly'( a bad case of dysentry).

Radcliffe merely rubber stamped a plan that had been given to him by British authorities. We shall never know for certain, because Radcliffe destroyed all papers and records related with the decision of partition and he never spoke about it for the rest of his life.

India had been partitioned into 626 parts.  India, East Pakistan, West Pakistan and 623 independent kingdoms. It was a disaster for the Indians.

Many Indians found themselves on the wrong side of the boundary and now prey to violent gangs intent on spreading terror, looting, raping and destroying.

Mountbatten who had promised law and order in the transition was inactive and silent. He let India burn, which many suspect was deliberate or gross incompetence.

It seems evident, that the wily British had deliberately created a mess. They had the mischievous intent, to create enough long lasting problems in the Indian sub-continent.  Was it to pave the way for Britain’s return to rule and dominate India once again sometime in the future? No one knows.

Another clear indication of Britain’s mischievous agenda was how the [British Army officer Major William Brown] the commandant of Gilgit Scouts supposedly went against wishes of his own British government guidelines and staged a coup against the Maharaja of Kashmir.

Brown hoisted the Pakistani flag on 2nd Nov 1947 and announced the accession of Gillgit to Pakistan.

For his impudence and disobeying the promise of the British government to Indian leaders, Brown was awarded the Order of the British Empire by a grateful British Crown in July 1948.

.Though Louis Mountbatten, the Viceroy of India had time till June 1948 to complete the partition and grant India freedom, he used a butcher’s knife to tear out the soul of a people bound by centuries old shared culture and history.

Pakistan by becoming a key partner of the Americans and British, evolved into a footstool for any power that would pay it mercenary fees and give it international support for all its mischief and terrorist activities.

Pakistan never learnt to exercise independence and remains independent only in name.  Pakistan is now a failed State dependent only on a Communist China which is slowly sucking out whatever vitality that is left.

[The Jewel in the Crown (TV series)](https://en.wikipedia.org/wiki/The_Jewel_in_the_Crown_%28TV_series%29) – Wikipedia

It was clear that a strong non aligned India had to be contained and what better than to give it a permanent headache in the form of Pakistan and 526 independent kingdoms. As Churchill hoped, that in a few decades, Indians would be begging the British to return and once again take charge of India.

Home » The Great Game: Why Did Britain Partition India? – OpEd