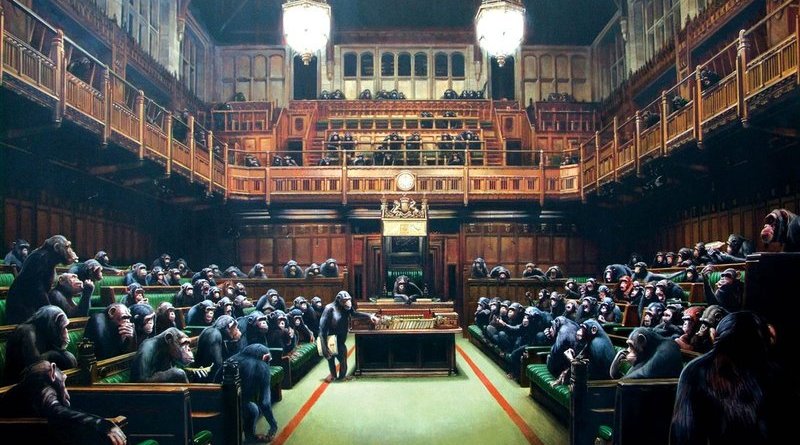 As Britain’s political system remains in Brexit turmoil, a Banksy painting of the House of Commons overrun by chimpanzees is to go on sale in London next month, CNN reports.

Created in 2009 — long before the term “Brexit” entered common parlance — the satirical painting is expected to fetch up to £2 million ($2.5 million) when it is auctioned at Sotheby’s in London on October 3.

Measuring 13 feet long, “Devolved Parliament” shows the benches of Parliament occupied by primates. It is the largest known canvas by the anonymous street artist whose controversial creations have earned him global renown. It will be on show at Sotheby’s for several days before the sale, just one mile from Westminster, where political chaos continues to reign.

The painting was first unveiled in 2009 as part of the groundbreaking Banksy vs. Bristol Museum exhibition. Then, earlier this year, it returned to the spotlight for another showing in Bristol to mark the date originally intended for Britain’s withdrawal from the European Union, March 29, 2019.

At the time, the artist, famed for his dark humor and political commentary, offered the following explanation on Instagram: “I made this ten years ago. Bristol museum have just put it back on display to mark Brexit day.

“Laugh now, but one day no-one will be in charge.”

The quote makes reference to the first time Banksy featured chimpanzees in his work. Back in 2002, he produced another large painting of a row of glum-looking chimps in aprons emblazoned with the words: “Laugh now but one day we’ll be in charge.”