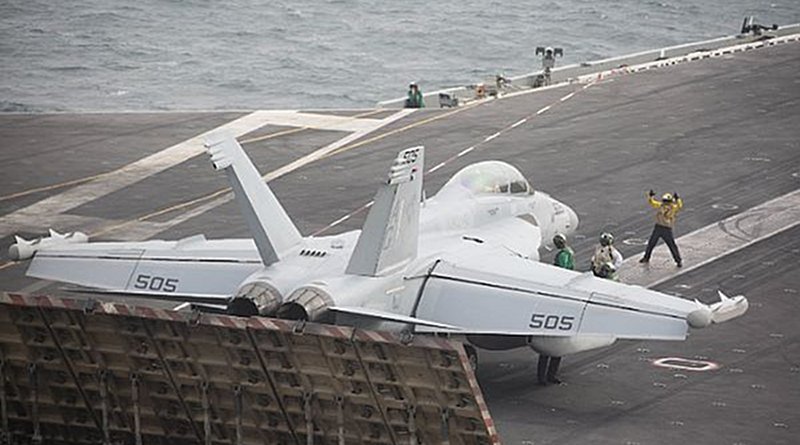 As the U.S. hovers on the brink of attacking Iran, the prelude to this state of affairs should be recognized before all is lost in the fog of war. The U.S. approach has devolved into bullying, blackmail and by some analysts definition–‘terrorism’.

Last week, the US Representative for Iran Brian Hook tried to bribe and blackmail the captain of a tanker  – Grace 1 -carrying Iranian oil to deliver the ship into US hands. https://lloydslist.maritimeintelligence.informa.com/LL1129058/US-moves-against-Iranian-oilforterror-maritime-network-prompts-IMO-complaint

He made the captain an offer he thought “he couldn’t refuse.”  He emailed him that “with this money [millions of dollars] you can have any life you wish and be well-off in old age.” [But]  “If you choose not to take this easy path, life will be much harder for you.”  The captain did not deliver the ship and has now been personally sanctioned by the U.S.  This Mafiaesque behavior is indicative of the likely deeper tone and tenor of the new US approach in the Iran dispute.  US hawks like US National Security Advisor John Bolton have long advocated use of force and regime change regarding Iran and their influence in the Trump administration has significantly increased.  Now they may get their wish. But this new belligerent US approach is giving pause to potential partners that it needs in its “maximum pressure campaign” against Iran.

This policy shift is a logical progression of its unilateral actions.  In May 2018, the U.S. pulled out of the Obama-era nuclear deal against the wishes of other parties most of whom are permanent members of the UN Security Council – – China, Russia, the U.K. and France – – and Germany.  https://www.vox.com/world/2019/6/21/18700857/us-iran-standoff-timeline  It then began its maximum pressure campaign. As predicted by the US Central Intelligence Agency the situation rapidly deteriorated into crisis. https://www.businessinsider.com/cia-predicted-crisis-that-followed-trump-scrapping-iran-nuclear-deal-2019-9

In November 2018, it intensified the pressure with a new round of sanctions targeting Iran’s oil and banking sectors.  In April 2019 the U.S. designated Iran’s Islamic Revolutionary Guard Corps (IRGC) a terrorist organization, the first time that it has ever done so for an arm of a foreign government.  Iran responded by designating all US military personnel in the Middle East as terrorists.

These US sanctions are a unilateral action by the U.S. outside the U.N. and not explicitly supported by any other parties to the nuclear pact. Iran has called the US maximum pressure campaign “economic terrorism against Iranian children, women and men.” https://nypost.com/2019/08/29/iran-says-there-will-be-no-talks-unless-us-lifts-sanctions/

There is some merit in this allegation.  Terrorism is “the unlawful use of violence and intimidation [emphasis added], especially against civilians in the pursuit of political goals”. https://www.google.com/search?q=definition+of+terorism&rlz=1C1NHXL_enUS733US733&oq=definition+of+terorism&aqs=chrome..69i57j0l5.6502j1j7&sourceid=chrome&ie=UTF-8

Also some US military personnel—especially those involved in drone strikes with collateral civilian damage—may indeed fit the definition of ‘terrorist’. China has implied that the US approach is “bullying”; Russia says it involves threats and regime change.

The US pursuit of the tanker—newly named Adrian Darya I– has certainly been Boltonesque.  The tanker –then named Grace I—was first detained—perhaps illegally—by Gibraltar on orders from the U.K. and at the request of the U.S. https://www.eurasiareview.com/27072019-legal-questions-regarding-the-uk-iran-tanker-tiff-analysis/ Despite US legal efforts to block its release, Gibraltar did so because of lack of evidence that it was violating EU sanctions by intending to deliver its cargo to Syria. Now the U.S. has placed a full court press on it threatening the global shipping sector and potential port countries with US sanctions if they assist it. However it may already have frustrated US efforts by discharging its cargo possibly in Syria. https://www.nytimes.com/2019/09/09/world/middleeast/iran-oil-tanker-syria.html If so this will likely lead the U.S. to redouble its efforts to block Iran’s oil exports.

On 13 May, four oil tankers were damaged by limpet mines.  Bolton said Iran was the culprit but Iran denied it.  Also in May, the U.S. ended waivers that allowed countries to import Iranian oil thus making major powers like China, India and Japan subject to US sanctions.  It also extended the sanctions to include steel, aluminum and copper and punctuated this by deploying an aircraft carrier and bombers to the region.

Responding to this pressure, President Hassan Rouhani said Iran would give the other signatories to the nuclear deal 60 days to mitigate the US sanctions.  It said that if this did not happen, it would begin to enrich uranium beyond the threshold agreed in the pact, thus getting closer to having enough to make a nuclear bomb.

In June, the Trump administration deployed additional troops to the Middle East; Iran downed a US military drone; and Trump ordered a retaliatory strike on Iran that he called off at the last minute. However, the U.S. did retaliate with cyber attacks shutting down a data base that the IRGC used to plan actions against oil tankers in the Gulf. https://www.nytimes.com/2019/08/28/us/politics/us-iran-cyber-attack.html

Then on June 13 two oil tankers were attacked in the Gulf of Oman.  Again the U.S. blamed Iran but again Iran denied it.  On 17 June Bolton announced the deployment of 1,000 troops to the region saying that the deployment is intended “to send a clear and unmistakable message to the Iranian regime that any attack on U.S. interests or on those of our allies will be met with unrelenting force.”On June 24 in a move that many considered petty, the U.S. imposed additional sanctions on senior Iranian leaders including Supreme Leader Ayatollah Ali Khamenei.

This is not the first time the U.S. has used force in the Strait of Hormuz to try to convince Iran of the error of its ways.  Its unilateral interpretation of the UN Convention on the Law of the Sea that neither has ratified means its warships continue to violate Iran’s declared regime of innocent passage there.

The reality is that as the weaker party there is not much Iran can do about what it perceives as the illegal and provocative behavior of US naval vessels.  If the U.S. were a party to the Convention, it could seek to have the dispute adjudicated, most likely by the International Tribunal for the Law of the Sea.  But of course, if the U.S. had ratified the Convention it would also be entitled to the more liberal transit passage regime.  It would be helpful if the Tribunal, in any relevant case, expressed its view as to whether non-State parties have the right to transit passage.

Meanwhile, not wanting to have a violent confrontation by actually denying passage to US naval vessels and requiring them to leave its territorial sea, Iran has apparently chosen to simply identify such vessels as part of its regulations enacted under its innocent passage regime.  But the US Navy vessels consider this harassment or even perhaps ‘hampering’ of its claimed transit passage through the Strait.  So far, US superior ‘might’ has made ‘right’.

Now the U.S. has announced a “sweeping action” targeting a so-called “oil for terror network” allegedly operated by IRGC Quds Force units.  The “Rewards for Justice” program includes up to 5 million for people who “disrupt terrorist financing” like delivering or providing information that leads to delivering a banned ship and cargo into US hands. According to Hook, the network includes more 37 entities, individuals and vessels like the Adrian Darya. https://www.jpost.com/Middle-East/US-offers-Iranian-tanker-captain-cash-reward-to-allow-vessel-to-be-seized-600709

This means that anyone owning or operating any of the 11 designated vessels, any company that provides fuel for them and any port that allows them entry will also be subject to the sanctions. https://www.cnbc.com/2019/09/08/high-alert-for-maritime-trade-amid-iran-sanctions-us-treasury.html

As the U.S. ramps up its economic and military pressure on Iran it is asking its friends and allies for help.  In response to increasing threats to shipping in the Persian Gulf—particularly in the Strait of Hormuz the U.S. has proposed “Operation Sentinel” –now being called the International Maritime Security Construct (IMSC) — to “ensure safe passage _ _ throughout the Arabian Gulf, Strait of Hormuz, the Bab el-Mandeb Strait and the Gulf of Oman.” https://www.i24news.tv/en/news/international/middle-east/1563593118-us-announces-multinational-maritime-effort-to-secure-gulf-waters-following-seizure-of-tankershttps://www.americanshipper.com/magazine/daily/?year=2019&month=6&day=25&page_number=3&via=asdaily; https://www.maritime-executive.com/article/u-s-launches-maritime-security-initiative-for-strait-of-hormuz

It is obvious that the U.S. thinks that the threat is from Iran and that its nexus is the Strait of Hormuz. The U.S. has asked some 60 countries to participate including allies the U.K., France, Germany, Norway, Japan, South Korea and Australia. http://the-japan-news.com/news/article/0005899604

But many prospective participants – including US allies –are wary of joining a US led and coordinated military effort there. https://www.theguardian.com/politics/2019/jul/23/jeremy-hunts-plan-of-european-led-maritime-force-in-gulf-hits-opposition  They fear that the U.S. will try to use the effort to enhance its maximum pressure campaign that includes its attempts to totally block Iranian oil exports. In short, they worry that a US-led effort will only escalate tension and the likelihood of conflict, thus further threatening the flow of oil. This would not be in their interests.

The U.S. has tried to allay this concern. But it persists and has retarded participation in its effort.  It does not help to dispel this impression that US Defense Secretary Mark Esper said that the U.S. is trying to put together a coalition of “like-minded allies who share our concerns about freedom of navigation, who share our concerns about Iran’s nuclear pursuits in the past, their missile technologies and, frankly, their malign activities in the region”. http://cimsec.org/will-the-sentinel-program-work-understanding-iranian-aggression-and-u-s-mixed-signals/41182 So far the U.K., Bahrain and Australia have agreed to participate.  Germany, France and New Zealand have declined.  Others have demurred.

Iran has responded to the U.S. belligerence with verbal blasts, diplomatic initiatives and legal arguments.  It has appealed to the other parties to the nuclear agreement to maintain it.  It has also officially complained to the International Maritime Organization that the U.S. has violated maritime treaties by offering bribes and making threats against its oil carriers, its captains and crews as well as port countries if they provide port services to the tankers. https://lloydslist.maritimeintelligence.informa.com/LL1129058/US-moves-against-Iranian-oilforterror-maritime-network-prompts-IMO-complaint

Certainly Iran has supported organizations that use ‘terror’ in furtherance of their political goals.  But is that what the U.S. is now doing – and even on an individual basis?  If so, US values and ethics are not what they are claimed to be.  Some allies may not support it in this dispute because of this hypocrisy.  Moreover, these actions may put another dent in the US claim that its values are humanity’s desired future.

This piece first appeared in the IPP Review. https://ippreview.com/index.php/Blog/single/id/1079.html

Home » Has US Approach To Iran Devolved Into Bullying, Blackmail And ‘Terrorism’? – OpEd