The South China Sea issue and China’s position on it have become subjects of much deliberation, especially since the ASEAN Regional Forum Meeting at Hanoi last July. It is generally believed that the South China Sea will emerge as the hot-spot of conflict in the coming years. Evidence of this is found in the heated rhetoric exchanged between parties to the dispute – most notably, China, Vietnam and the Philippines. A declaration by the United States that it has a “national interest” in the region was seen as its commitment to taking an active part in the issue, much to Chinese chagrin. In recent weeks, statements by Chinese officials reasserting China’s “indisputable sovereignty” over the South China Sea and warnings to India against investment in the region are seen as signs of Chinese aggressiveness that would inevitably precipitate conflict.

Suggestions for greater Indian involvement in the South China Sea disputes are made on the grounds that India must be forceful in its dealings with China. The continuation of ONGC Videsh Limited’s (OVL) investments in Vietnamese energy fields is certainly advisable. In fact, there is nothing to indicate that the Indian government is thinking otherwise. OVL’s presence in Vietnam is not a recent phenomenon. Its first joint-venture for offshore oil and natural gas exploration in Vietnam’s Lan Tay field along with Petro Vietnam and BP became functional in 2003. Deals for the investments now in the headlines were signed in May 2006; this is a project that will not be halted because of oblique Chinese statements. India simply need not take heed of Chinese views on Indian economic ventures. 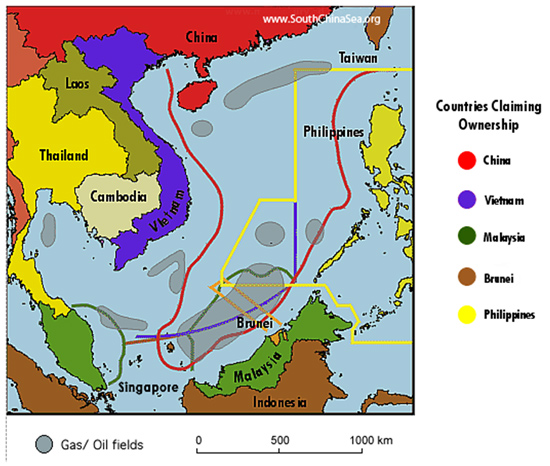 What is worrisome however is the suggestion that Indian involvement should extend to taking an active part in the territorial disputes themselves, and that India should actively extend its naval presence – either to protect OVL’s investments (to be now deemed strategic and thereby meriting the backing of the Indian armed forces) or to protect the SLOCs. A closer bilateral relationship with Vietnam, Vietnamese rhetoric on the South China Sea disputes and its history of standing up to big powers are provided as rationale for India to engage and arm Vietnam to win a war in the South China Sea.

These suggestions to recalibrate Indian policy towards the South China Sea and its relationship with Vietnam as a linchpin in the process, are premature at best. Despite the rhetoric, conflict in the South China Sea may not be inevitable. If the history of dialogue between the parties is any indication then current tensions are likely to result in forward movement. In the aftermath of statements by the US and skirmishes over fishing vessels, ASEAN and China agreed upon The Guidelines on the Implementation of the Declaration on the Conduct of Parties in the South China Sea at the Bali Summit in July 2010. Recent tensions may well prod the parties towards a more binding code of conduct. This is not to suggest that territorial claims and sovereignty issues will be resolved, but certainly can become more manageable to prevent military conflict.

There is a common interest in making the disputes more manageable, essentially because, nationalistic rhetoric notwithstanding, the parties to the dispute recognize that there are real material benefits at stake. A disruption of maritime trade through the South China Sea would entail economic losses, and not only for the littoral states. No party to the dispute, including China, has thus far challenged the principle of freedom of navigation for global trade through the South China Sea. The states of the region are signatories to the UNCLOS, which provides that “Coastal States have sovereign rights in a 200-nautical mile exclusive economic zone (EEZ) with respect to natural resources and certain economic activities, and exercise jurisdiction over marine science research and environmental protection”; but that “All other States have freedom of navigation and overflight in the EEZ, as well as freedom to lay submarine cables and pipelines.” The prospect of threats to SLOCS thus seems somewhat exaggerated.

It will also be pertinent to remember that the states involved deem the dispute as only one part of larger bilateral relationships. The South China Sea is by no means the only calculus through which smaller countries view their relationship with China. Earlier in the month, Philippine President Aquino stated that the dispute in the South China Sea is but one aspect of the relationship with China. The country would continue to seek greater Chinese investment particularly in the fields of tourism and energy, among others. Vietnam too has not let its relationship with China be stymied by the disputes over the South China Sea. The General Secretary of Vietnam’s ruling Communist Party, Nguyen Phu Trong, visited Beijing last week and the joint statement issued stated that the two sides would “actively boost co-operation” in offshore oil and gas exploration and exploitation. It was also agreed that negotiations towards a peaceful settlement of the territorial disputes in the South China Sea would be speeded up, military cooperation between China and Vietnam would be strengthened, a hotline between defence ministers established and contacts between high-level officials would be increased. As of July 2011, China, ranking 14th among Vietnam’s foreign investors, had 805 operational projects in Vietnam with a capitalized value of USD 4.2 billion. Furthermore, China has been Vietnam’s largest trading partner since 2004. Bilateral trade between the two was valued at USD 27 billion in 2010; for the first half of 2011, the corresponding value was USD 16 billion. In the event of military hostilities, the first casualty would be the economic relationship, an outcome both countries are keen to avoid.

Despite what opinion pieces in the Global Times may say, there is reason to suspect that China does not want to escalate conflict in the region. Although commentary from the US has suggested that China considers the South China Sea a “core interest”, no official Chinese writing can be found to corroborate this. The designation of an issue as a “core interest” by China would imply the will to safeguard that interest with military means. Chinese scholars are wary about such a development. The caution advocated over the inclusion of the South China Sea into the pantheon of “core interests” is a clear indication that China is not prepared to engage in direct military confrontation over the issue. This caution can also be seen as a reflection on Chinese military capability, which is not yet assessed as being strong enough to win a war over the South China Sea. The China National Defense News published by the Chinese PLA’s General Political Department has likened the use of force by China in the South China Sea to shooting one’s own foot. Not only would the use of force bring ASEAN together on the issue, it could conceivably involve the US and Japan; derail China’s plans for continued economic growth and undo China’s diplomacy based on peaceful development and harmonious world conceptions. Chinese declarations on the South China Sea can be seen as attempts to exaggerate claims so as to obtain a better negotiating stance. The area is obviously disputed and Chinese claims to “indisputable sovereignty” do not make it any less so.

For India to revise its policy on the South China Sea in such conditions would be foolhardy. It is unclear how far Vietnam would be a willing partner in escalation of conflict with China. Given that escalation is not in China’s interests either, it remains unlikely that China will use military force to disrupt OVL’s operations (others such as ExonnMobil have continued to operate in areas China claims). In any case, India’s military relations with Vietnam should deter any such occurrence. There is no need for India to take positions on territorial disputes in which it is not involved. Perhaps India could take a page out of the US book on this matter. Despite claiming a “national interest” on the issue, the US has categorically stated that it will not take sides on the territorial disputes. A revision of Indian policy on the issue should be based on a clear understanding of what India stands to gain and how Indian national interest is strengthened. India’s relationships with South East Asian countries are not uni-dimensional. They are not geared only towards checking the Chinese imprint in the region but are reflective of India’s multifarious interests globally. As regards military support for OVL’s operations, the issue should be reflected upon seriously. It is one thing to build capabilities in order to deter misadventure, quite another to back investment with military might. This is a matter that will affect Indian ventures globally. Is India prepared – both in terms of military capability and policy implications – to send military backing for all such ventures? This is an issue that is larger than India’s relationship with Vietnam or China – it is a question of Indian values and vision in the long term.

Originally published by Institute for Defence Studies and Analyses (www.idsa.in) at http://www.idsa.in/idsacomments/TheSouthChinaSeaDisputesWhyConflictisnotInevitable_rgupta_171011

Home » The South China Sea Disputes: Why Conflict Is Not Inevitable? – Analysis