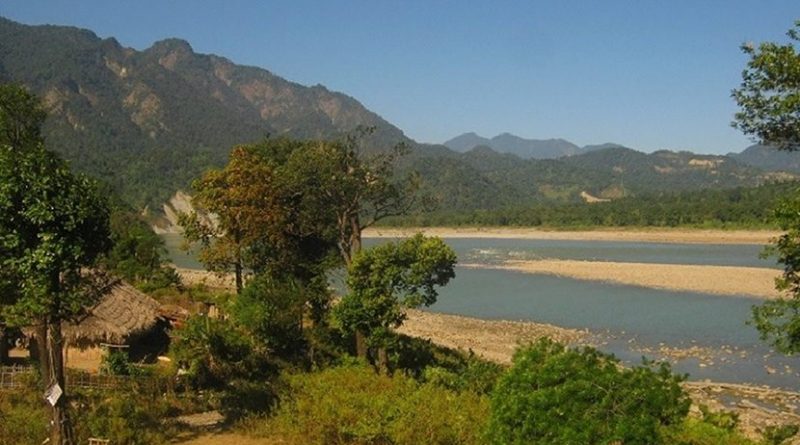 As Arunachal Pradesh Chief Minister Pema Khandu, along with his state cabinet colleagues recently supported the Multipurpose River Valley Project for the Siang River in a NITI Aayog meeting, the people of the Siang districts oppose the projects.

Siang Indigenous Farmers’ Forum (SIFF) has opposed the project and the stated goal of NITI Aayog to merge Stage I and Stage II of the power project over the Siang river, which will submerge over 100 villages and affect lakhs of people and their livelihood in the Siang river valley in the state, as well as in downstream areas of Assam.

“There is lurking danger of several of our small tribal communities getting wiped out from the face of the earth. Once uprooted, our culture, or language, our heritage will be all lost simply because some people elsewhere require electricity,” Tasik Pangkam, general secretary of the SIFF said in Guwahati today. Siang Indigenous Farmers’ Forum (SIFF) has opposed the project and asked the government to stop it in the larger interest of the tribal communities of the area.

The state government had proposed three power projects in the Siang belt (East, West and Upper Siang districts) with a total installed capacity of 12,450 MW. Work of three mega power projects over Siang River in Arunachal Pradesh has run into rough weather, with stiff opposition from the indigenous people who apprehend that the projects would submerge a large chunk of cultivable land, besides jeopardizing their existence.

“While we have been opposing the earlier proposed Siang Stage I and Siang Stage II hydel projects on the ground that those would displace hundreds of indigenous tribal families in the larger Siang region, the NITI Aayog is now bent upon wiping us out in the interest of producing power for people of other regions of the country. Our communities are small, and thus don’t appear to be important for the government and the NITI Aayog,” Pangkam said on Tuesday.

Pangkam said the proposed single multi-purpose dam project that would replace the proposed Siang I and Siang II hydroelectric projects would not only submerge villages and displace the tribal areas, but also “wipe out” a civilization. “We are not totally opposed to power projects. We have never opposed the ongoing construction of 12 small and medium power projects in Upper Siang district. We are only opposing those projects which will invite doomsday for the indigenous people of the Siang belt,” he said.

“There is lurking danger of several of our small tribal communities getting wiped out from the face of the earth. Once uprooted, our culture, or language, our heritage will be all lost simply because some people elsewhere require electricity. Can this be justified,” Pangkam asked at a press conference. He said several towns including Gelling, Tuting, Yingkiong and Geku would also get submerged once the dam was constructed. “The MoA between NEEPCO and the state government was hurriedly signed without the knowledge of the people affected by the project,” SIFF president Gemin Jiji alleged during a press conference on Tuesday afternoon.

The NITI Aayog had on September 26 made a presentation before Arunachal Pradesh chief minister Pema Khandu and several of his senior cabinet colleagues in New Delhi on the Siang single multi-purpose river valley project which would replace the earlier proposed Siang Stage I and Stage II projects. To be constructed at the proposed Siang Stage II location as a single storage project instead of two separate projects as earlier scheduled, it would submerge over 300 tribal villages and produce 10,000 MW of hydro-electric power.

CEO NITI Aayog, Amitabh Kant urged on the need to make the project viable and feasible for the people of Arunachal Pradesh. The proposed project is estimated to be 300 metre high dam with power generation capacity of 10000MW. According to Union government and some experts, being a multipurpose project, it will moderate flood and erosion providing relief in downstream river reaches of Arunachal and Assam.

He said, the length of the reservoir for the project was planned at 208.5 km, which if breached, would have a devastating impact not only across the entire Siang belt but in neighburing Assam as well.

“No amount of compensation in terms of money, land and housing can help us preserve our history, folklore, music and culture. Humanity will lose our rich heritage forever. And above all, the very character of the Siang, which becomes the Brahmaputra in Assam, will be changed,” Pangkam said.

While referring to the devastating floods of 2000 at the Siang belt which left a trail of destruction, he said the extent of damage was massive when the rise of water level during the floods was only 30 metres.”One wonders what could be the scale of devastation if the three proposed dams breached, the heights of which were planned at 145, 257 and 154 metres respectively,” he said.

Opposition to the Siang single multi-purpose river valley project comes at a time when the construction work on the 2000-MW Lower Subansiri hydro-electric dam project has remained closed since December 2011 amid protests in downstream Assam.

Arunachal Pradesh chief minister Pema Khandu had last month said that opposition to hydro-electric projects in his state were fueled by narrow vested political interests and hence required adequate awareness programmes to dispel the fears. People in his state often fall prey to misinformation and thus carry a lot of negative notions about large dams, Khandu had said. The memorandums for the remaining two projects are yet to be signed.

Opposing the projects, people of the Upper Siang district under the banner of Siang Indigenous Farmers’ Forum (SIFF) on Tuesday submitted a memorandum to Chief Minister Nabam Tuki demanding immediate cancellation of the memorandum of agreement inked between the state government and North East Electrical Power Corporation (NEEPCO) on May 28 last for execution of the 3,750 MW Siang Upper-II power project. Despite such opposition, no state governments has paid interest to negotiate or discuss the matter with local people.

While threatening to launch an agitation if the state government failed to meet its demands, the Forum was adamant on the view that no amount of compensation or mitigation measures could replace the ancestral land of the indigenous tribal people of the area.

On the other hand, locals in Pasighat are resisting more dam building on Siang, as the Brahmaputra is known in the region. In a recent meeting on ‘Policy Dialogue for Governance of the Brahmaputra River’ held in Itanagar, the capital city of Arunachal Pradesh, last year, anti-dam leaders faced off against state government officials and some experts had who favoured dam building on the Siang.

Known as the Yarlung Zangbo and Tsangpo in China, the Brahmaputra enters Arunachal Pradesh near Gelling from where it is known as the Siang. The total length of the Siang River is 294 km until it meets the Dibang and Lohit rivers at Sadia in Assam. Since Assam too is affected, civil society groups and individuals have been opposing the construction of big dams there as well. Their appeals to different authorities not to give environmental clearances for the dams being built in the four districts of Siang, East Siang, Upper Siang and West Siang have gone unheard.

The Siang People’s Forum (SPF) and Lower Siang Dam Affected Peoples’ Forum (LSDAPF), who have been spearheading the anti-mega dam movement in the Siang valley, had appealed to the previous central government, the United Progressive Alliance (UPA), and also to its chairperson, Sonia Gandhi. They have now appealed to the National Democratic Alliance (NDA), led by the Bharatiya Janata Party (BJP), and in a memorandum to the Prakash Javadekar, who was then the minister of environment, forest and climate change (MoEFCC), the SPF declared that the four districts would not compromise on their demand of scrapping all mega dams over the Siang river.

Nonetheless the big dams are still being built. While construction on some has been halted by the courts, others continue. Vijay Taram, an anti-dam activist with the Forum for Siang Dialogue, said,

“We are not against small dam and dams on tributaries of Siang”, but “big dams will spoil our lives and livelihood. If completed they will flood all fertile agricultural lands, destroying the flora and fauna of entire Siang belt and displace thousands of people of Siang valley. Tribal men will lose their traditional hunting grounds as well as the link to their culture.”

“We did not get our land from the British or Indians,” he said. “We inherited it from our forefathers. We will protect our land, and fight for it!”

The Siang districts belong to the indigenous communities of the Adi and Galo tribes. Twenty-three of their villages are on the banks of the Siang River and will be directly affected by the project. Rice is a staple food of Adi and Galo people and wet rice fields are situated just above the Siang River. The planned dam will submerge these fields, threatening the very survival of these tribes. Anti-dam movement leaders say that their right to free, prior and informed consent (as enshrined by the UN Declaration on the Rights of Indigenous Peoples) is not only being ignored, but deliberately avoided.

The main dam is being constructed across the Siang, the main stem of the Brahmaputra, and upon completion the dam reservoir will hold 10 billion cubic metres of water. The hydropower project at Siang will generate between 10,000 and 12,000 MW, making it the largest hydroelectric dam in India.

In three districts of Siang, not a single villager was informed about the plan and recommendation for dams. Local people still do not know how many dams are being planned in their region. They do not want dams, but they do want development of the area and a good market where they can sell their agricultural produce.

People weigh the impact of the dams and conclude that the progress it will bring may outweigh any adverse changes. People fear flash floods that they have seen earlier. In June 2000, the Siang flooded, killing at least 30 people. More than 100 went missing.

David Gao, an anti-dam activist and assistant professor at the department of political science in Rajiv Gandhi University, said ” the construction of this mega dam might lead to consequences which will harm the indigenous people. Unfortunately for the people, they do not know who to turn to for help. The position of the political parties has changed over time.”

People of Siang were disheartened by the U-turn on the issue by the NDA after it came to power at the centre in 2014. Before the elections, Prime Minister Narendra Modi had won the support of dam activists from the area after he stated at a rally in Pasighta that he would prefer smaller hydro power projects and honour the sentiments of the region’s people. But after the elections, his government cleared the construction of the 3,000 MW Dibang Hydro Electric Project in Dibang Valley in Arunachal Pradesh.