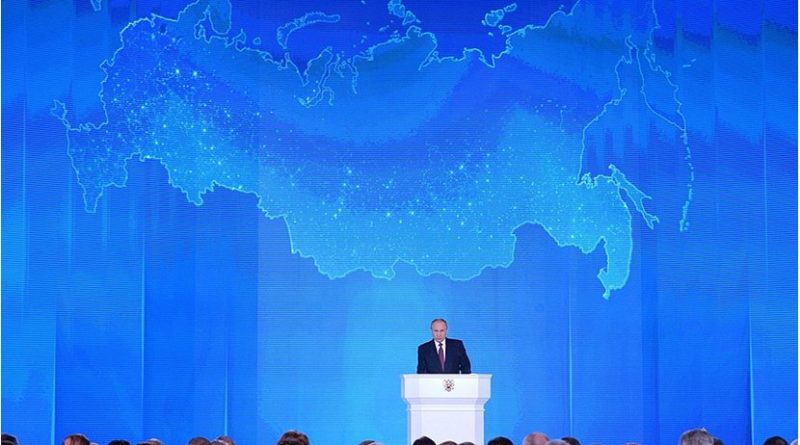 (RFE/RL) — When the Russian Constitution was approved in late 1993, the fledgling country’s parliament building– now known as the White House– was blackened and charred, the result of an all-out military assault ordered by President Boris Yeltsin to quell an uprising by a group of lawmakers.

Yeltsin won that fight, pushed through a new constitution, liberalized Russian society, and went on to preside over seven more years of economic chaos, war, and, to many Russians, humiliation at the hands of the West.

Fast-forward 25 years, and Russia is a different place, under a different president, Vladimir Putin, who has brought to heel the media, much of civil society, and most political opposition, and rules virtually unchallenged, bolstered by a robust security apparatus.

Different times require different rules, which is what Valery Zorkin, the chairman of the Constitutional Court, floated last week in an opinion piece in the official government newspaper Rossiiskaya Gazeta.

Heavy with philosophical musings, the more-than-4,000-word article, which grabbed attention from close watchers of Kremlin politics and focused attention on whether Putin was up to something, suggested that the constitution needed to evolve as Russian society evolves.

“Of course, our constitution has shortcomings,” Zorkin wrote. “These include the lack of an adequate balance in the system of checks and balances; bias in favor of the executive branch of government; the lack of clarity in the distribution of powers between the president and the government.”

He also referenced a concept that 19th-century Russian Slavophile thinkers used to try to push back Western ideals: “sobornost,” which translates loosely as communalism or national unity.

“We need a legal theory that synthesizes, within the framework of the concept of law, the ideas of individual freedom and social solidarity. Such an approach to legal thinking is most relevant to the mentality of the Russian people, their legal and moral consciousness,” Zorkin wrote.

For some Russian observers, the references to 19th-century history echoed recent philosophical trends in Russian politics, like those of ultranationalist ideologue Aleksandr Dugin, or Putin, whose public statements have selectively referenced both Russian imperial and Soviet history.

But for analysts like Kirill Martynov, a political columnist at the opposition newspaper Novaya Gazeta, Zorkin’s suggestion of constitutional changes was more ominous: a sign that some Kremlin officials are actively toying with the idea of changing the law to possibly prolong Putin’s tenure in office beyond 2024, when his current term ends.

“Why did he start talking about the benefits of adjusting the basic law right now? Is it really only because of the date of the anniversary” of the constitution’s signing? Martynov wrote in a column on October 11.

Putin has served as Russia’s preeminent leader since 1999, and his popularity remains high, despite the pointed opposition from many Russians to recent changes to the country’s pension system.

For the moment, there appear to be no real rivals to Putin, with the Kremlin having pushed opponents to the margins. Nor are there are any obvious successors. Given the current prohibition on him serving a fourth term in office, Putin’s most ardent supporters have openly discussed how to keep him in power, a discussion that predated the March election.

The constitution can be modified using simple legislation, but, at least officially, amending the section of the constitution that would allow Putin to remain in office beyond 2024 requires that a constitutional convention, or assembly, be convened, according to Will Pomeranz, author of a forthcoming book on Russian law.

That has never happened, Pomeranz says. Moreover, no law laying out how that is supposed to happen currently exists.

“The bottom line is that if Putin wants to rule beyond 2024, he will need to amend the constitution,” says Pomeranz, who is the deputy director of the Wilson Center’s Kennan Institute in Washington, D.C. “Such a decision does not need to be made now; it can take place in 2020-21 [or later]. So while Zorkin may be laying some groundwork, the crucial decision will be Putin’s, and whether he wants to rule beyond 2024.”

The constitution was changed only once before — in 2008 — when Dmitry Medvedev, just months after succeeding Putin as president, pushed through an amendment that extended the presidential term limits from four to six years. The change was passed by the national parliament, and all of the country’s 83 regional legislatures, in just 50 days.

But many experts saw the move as a legal sleight-of-hand by the Kremlin that violated the constitution itself.

Gordon Smith, a scholar of Russian constitutional law at the University of South Carolina, says Zorkin’s use of the word sobornost — which also has religious connotations — seemed to be aimed at the notion of a collective Russian mind that would potentially be superior to Western notions of individuals rights and liberties.

“Who’s to say what that is? Is it the state? Is it the church?” says Smith, who helped advise several Russian legal scholars who helped draft the constitution in 1993. “Is it creating a platform for legitimizing the continuation of the Putin presidency? Who embodies the sobornost? You could argue that it is embodied by Putin.”

“That may be a stretch, and a reflection of Western cynicism and doubts about Russian politics,” he adds, “but then again maybe I’m naive.”

One passage in Zorkin’s article mentions “the rights of certain minorities” — which he argues appears to be a veiled reference to Russian gays and lesbians seeking legal rights, similar to what has happened in the United States and Europe.

That same passage also makes reference to unnamed outside entities imposing rights on Russian society, a reflection, Smith says, of Moscow’s impatience with organizations like the Council of Europe or the European Court of Human Rights.

Asked by RFE/RL’s Russian Service whether there was a move to amend the document, Kremlin spokesman Dmitry Peskov brushed aside the question.

“There is no such work going on in the presidential administration,” Peskov said. “We take [Zorkin’s article] as an expert, and personal, point of view.”

With reporting by Valentin Baryshnikov of RFE/RL’s Russian Service