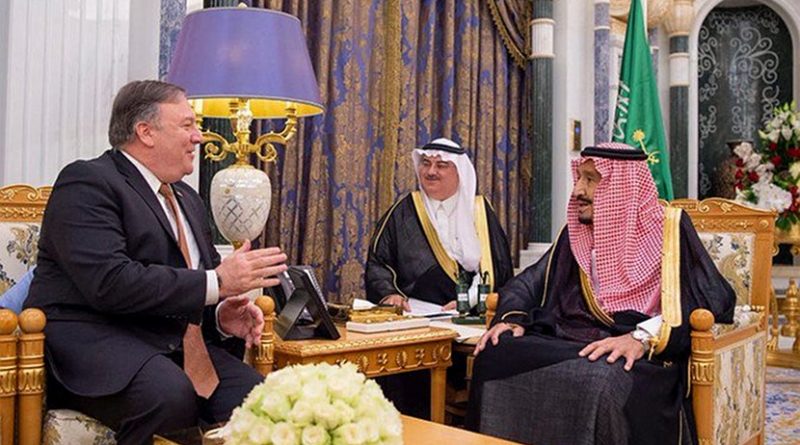 File photo of US Secretary of State Mike Pompeo with King Salman in the Saudi capital. (SPA)

US Secretary of State Mike Pompeo flew into Riyadh on Tuesday for talks with King Salman of Saudi Arabia and Crown Prince Mohammed bin Salman on the case of the missing Saudi journalist Jamal Khashoggi.

Pompeo had a brief meeting with the king before a lengthy, 40-minute discussion with the crown prince. “We are strong and old allies. We face our challenges together,” the crown prince said as he warmly welcomed Pompeo to the Saudi capital. Later Prince Mohammed also discussed the investigation in a phone conversation with US President Donald Trump.

Saudi Minister of Foreign Affairs Adel Al-Jubeir also had talks with Pompeo. “The secretary and the foreign minister agreed on the importance of a thorough, transparent, and timely investigation,” State Department spokeswoman Heather Nauert said later.

Khashoggi, a Saudi citizen who lived in the US, disappeared on Oct. 2 after visiting the Saudi Consulate in Istanbul to complete paperwork related to his divorce. Saudi Arabia and Turkey have set up a joint team to investigate the disappearance.

Officers from the team searched the consulate in Istanbul for eight hours overnight on Monday, and left at 5 a.m. on Tuesday.