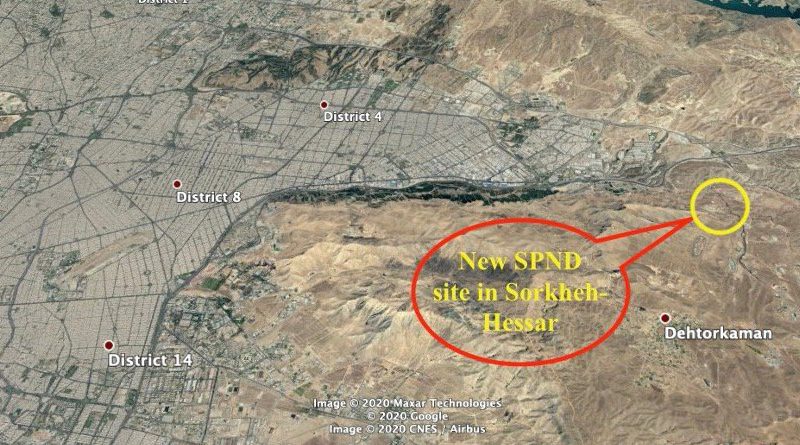 Leaders of the National Council of Resistance of Iran (NCRI) have unveiled details of a previously unknown Iranian nuclear site just east of Tehran.

The site is located in the Sorkheh-Hessar region and is operated by Iran’s Organization of Defensive Innovation and Research (SPND).

They argued that the identification of the new site exposes the Iranian regime’s lies and the failure of the Joint Comprehensive Plan of Action (JCPOA), the multinational deal on Iran’s nuclear program agreed in 2015.

“The exact location of the new site is on Damavand Highway, east of Tehran, two kilometers down the exit road to Sorkheh-Hessar,” said NCRI spokesman Alireza Jafazadeh. “At the entrance of this road, there is a checkpoint, as it is considered to be a military area. The location of this new site is north of the Khojir site, which is the largest complex manufacturing ballistic missiles for the Hemmat and Bakeri missile industry.”

Soona Samsami, the NCRI US representative said, “These new sites make it clear that the SPND, which pursues the building of nuclear weapons with the Ministry of Defense, is continuing its activities.

“Our revelation today once again proves that fact that the JCPOA did not prevent the mullahs’ strivings to acquire nuclear weapons and that the regime has even reneged on its commitments stipulated in the JCPOA. These activities have taken place since the JCPOA was signed in 2015 and even prior to the US leaving the Iran nuclear deal.”

Samsami said: “The JCPOA in 2015 overlooked some of the most undeniable aspects of the possible military dimensions of the Iranian regime’s nuclear weapons program. No wonder that the regime took no steps toward destroying its infrastructure in this regard. At best it temporarily stopped its overt operations.”

Jafazadeh said that despite the 2015 JCPOA agreement with the UN, Iran has continued to deceive the world in its pursuit of a nuclear bomb and they are “closer everyday.”

“The revelation today shows that the nuclear infrastructure that is tasked with building the bomb, the core of that program is the SPND, continues to thrive,” Jafarzadeh said.

“No parts of that program have been disbanded since 2015. It continued before the JCPOA, during the JCPOA and after the JCPOA.”

The JCPOA deal was endorsed by UN Security Council Resolution 2231 and adopted on July 20, 2015. Iran’s compliance with the nuclear-related provisions of the JCPOA was to be verified by the International Atomic Energy Agency (IAEA).

On May 8, 2018, President Trump denounced the JCPOA saying the US was withdrawing from it. He said he would reinstate a new more comprehensive embargo and sanctions on the Iranian regime, criticizing former President Barack Obama who helped to push the JCPOA agreement.

Jafarzadeh said the satellite photos, details of the newly revealed nuclear site and the names of the Iranian government officials who oversee the nuclear weapons construction at the site are being provided to the International Atomic Energy Agency (IAEA), which oversees the nuclear production of its members.

“The construction project of the new site in Sorkheh-Hessar started in 2012 and its construction took several years. Around 2017, some sections of SPND, including the geophysics section, known as the Chamran Group gradually moved in, as the construction of other parts of the site were later completed,” Jafazadeh said.

“By transferring parts of SPND, the activities of its different sections have expanded. By being located in a military area, it has found an appropriate cover to keep the identities of the personnel working there a secret.”

Jafazadeh said that according to information provided by the Iranian Resistance in June 2017, SPND is using an IRGC missile site south of Semnan, to the east of Tehran, to test its explosives.

Among the information provided to the IAEA are details about the Iranian personnel overseeing the nuclear weapons program. The site was built under the supervision of Admiral Ali Shamkhani, who was the minister of defense and logistics. The project was handled by companies working with the IRGC’s Khatam-al-Anbiya garrison’s engineering department. The IRGC who handled this project was engineer called Hashemi Tabar, who is in charge of IRGC’s secret projects and has been involved in the construction of IRGC’s tunnels and secret sites.