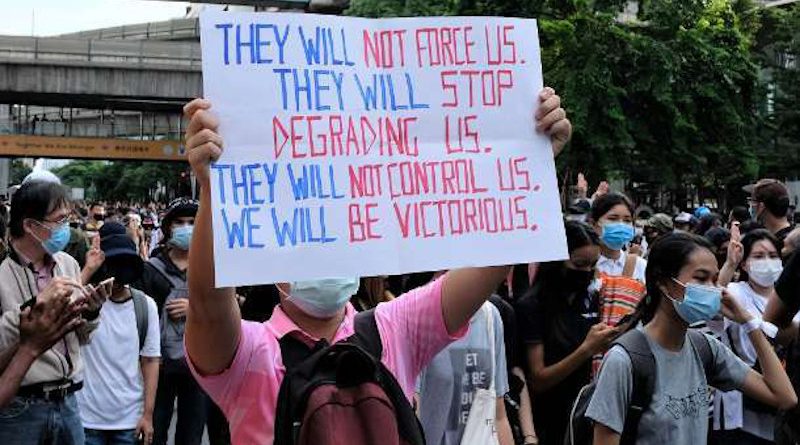 A young Thai protester holds up a sign at a mass rally against the military-led government at a key intersection in Bangkok's commercial heart on Oct. 15. (Photo: UCA News)

Some 20,000 young Thais, including high school students in their uniforms, defied the government on Oct. 15 by staging yet another mass protest, this time at a large intersection in the commercial heart of Bangkok.

Surrounded by hundreds of police officers arrayed in phalanxes with many of them in riot gear, the demonstrators chanted calls for Prime Minister Prayut Chan-o-cha, an ex-army chief who seized power in a coup in 2014, to resign despite a “severe emergency” decree that Prayut had issued earlier in the day prohibiting any gatherings of more than five people.

Disregarding the decree and the presence of police officers, the young pro-democracy demonstrators flashed the movement’s three-fingered salute of defiance and listened to fiery speeches by young activists demanding democratic reforms in a country that has been under an autocratic regime for over six years.

They continued their protest late into the night with not even rain and humid monsoon heat dampening their spirits.

“The army took control illegally when I was still in primary school and they are still in power although I’ve already graduated from high school,” a young participant who is a freshman at a university in Bangkok told a UCA News reporter.

“I feel that young people like me have no hope and no future with this government in charge.”

Based on their social media activities, similar sentiments are held by large numbers of young Thais who have grown up under a military regime that has stifled various freedoms in past years and has done little to improve the economic prospects of most Thais.

Prayut’s government has been widely blamed for a severe downturn in Thailand’s once-robust economy, which has been further battered by the Covid-19 pandemic.

Yet Thailand’s mercurial prime minister has given no indication that he would be willing to negotiate with the protesters, much less resign.

Early on Oct. 15, at least 20 leaders of student-led demonstrations that have been taking place since early July were arrested after holding a mass rally at Bangkok’s Democracy Monument the previous day.

Police spokesman Kissana Phattanacharoen said the activists, many of whom are university students, will be charged with violating a law by failing to notify the authorities about their rally.

“No matter where a gathering takes place, the police have a duty in providing security and order,” the police spokesman was quoted as saying. “If anyone [wants to] do anything illegal, I want others to help discourage them from doing so.”

Prayut’s government wants to put an end to any further protests by criminalizing such rallies through a sweeping new State of Severe Emergency decree, which also allows the authorities to censor any news they deem a threat to national security.

The move has been slammed by opposition politicians and rights advocates alike.

“I condemn PM Prayut Chan-o-cha’s declaration of the State of Severe Emergency in the Bangkok area, as well as the crackdown on protesters and the arrests of protest leaders,” Rangsiman Rome, a young politician who is a member of parliament for the liberal Move Forward party, said in a Facebook post.

“This is no different than a coup and it will only make things worse,” he added.

In a post on Twitter, Sunai Phasuk, a senior researcher in Thailand for Human Rights Watch, called the imposition of the decree a “dark day.”

“Censorship and [a] ban of public gatherings imposed. Arrest and detention without charge permitted. No accountability for abuses,” Sunai said.

Yet the decree did not stop thousands of young Thais from continuing their protests yesterday.

“No one wants to get arrested, but [civil disobedience] is the only way we can get our voices heard,” one student activist told UCA News.

Yet protests against the military-led government can come with grave risks. In May 2010, dozens of pro-democracy protesters were gunned down by army soldiers, including snipers firing at unarmed civilians from high-rises, at the exact same site where the latest student-led rally took place.

Range anxiety, the fear of running out of power before being able to recharge an electric vehicle, may be a