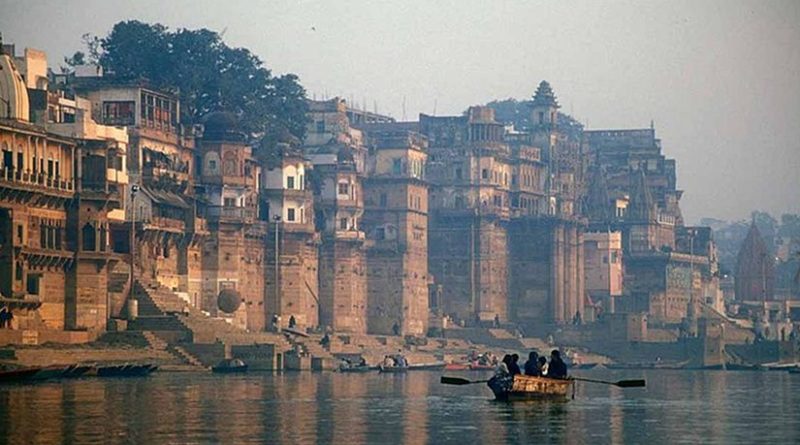 Time has come to become serious about the future of the river. There is a growing perception that the Ganga might completely dry in next fifty years if no effective action is taken to purify the river, keep the flow of its water intact and control the global warming. There cannot be a greater catastrophe bigger than this on the earth if the Ganga vanishes from the scene.

Already certain disturbing symptoms have come into the picture. Recent media reports have revealed that the Ganga has started moving away from the ghats in Varanasi, the holy city in India. On 31st May 2011, India’s premier national daily, the Asian Age, published from New Delhi came out with the news “Ganga leaves the ghats, panic in Varanasi”. Subsequently, many of India’s print and electronic media presented facts and figures about the sad story of Ganga river distancing itself with the ghats.

Because of the above untoward incidents, the devotees in many parts of Varanasi have been worried. Virtually, they live in a state of panic now. They feel that the Ganga, which is revered as mata (mother Goddess), has become angry due to the pollution along the ghats and so she tried to move away.

Ganga in this ancient city of Varanasi has special importance. It is uttarbahini meaning it flows from south to north direction. As the mythology goes, Goddess Ganga had made a promise with Lord Shiva that she would not abandon the ghats in Varanasi. But as the Ganga has done so, many people take it as a symbol of bad omen. So in their bid to cheer-up the mother Ganga and bring her back to the ghats, many devotees got themselves engaged in such activities as kirtans and bhajans, apart from observing fasts and poojas.

Many people feel that the Ganga is changing its course because of unprecedented level of pollution. But there are people who feel that the Ganga is diverting its course because of the growing sediments in the river. Certain people hold the view that the shortage of water in the river is caused by the construction of dams and barrages upstream and diversion of water from the river for different purposes. About 9 per cent of the river water is diverted to canals at Bhimgouda barrage alone!

Future of the Ganga river looks still bleak if Chinese plans of building dams and water diversion on all the major rivers flowing from Tibet towards the South Asia are materialized after 2014. If at all this occurs, what will happen to the fate of the Ganga? Of course, the river does not originate in Tibet. It originates from Gangotri in Indian Himalayas. But Nepal’s major river like the Karnali or major tributaries of the Gandaki and the Koshi originate in Tibet. Since these rivers are important source of Ganga water, any attempt to be made by the Chinese to construct dams on them or divert their water would largely affect the flow of Ganga river.

What the Chinese would do or not do in regard to building dams and developing diversion projects on the rivers flowing from Tibet region towards Nepal and India is of course a matter of growing concern as it might affect the water level of the Ganga. But more than this our own behavior towards the Ganga, whom we regard as mother, is no less disturbing.

Unfortunately, the Ganga river has been made extremely polluted. The wastes from industries, town and cities along the banks of the Ganga river is dumped into it. Lack of effluent treatment and efficient sewage networks in towns and cities is a problem. As a result, its bio-diversity is threatened. Its environmental sustainability is in danger. The lower riches are the filthiest one. In view of this development, a fifteen-year project Ganga Action Plan was introduced by Indian Prime Minister Rajiv Gandhi in 1985 in Varanasi in order to clean up the pollution of the Ganga river mainly through sewage management by 2000.

The government claims to have spent a whooping amount of IRs. 36,000 crores to clean the Ganga. But even after launching the Ganga Action Plan for a quarter of century, there has been no improvement in the pollution level in the Ganga. It does not seem to have made any impact in Varanasi, either. Sewage discharge has made the condition of the river worse. All such government bodies as the Pollution Control Board, Environment Department, Health Department are there to control the magnitude of pollution in the river, but they have miserably failed to do anything concrete.

Hence, as a face saving device the Government of India made a fresh commitment in 2010 to purify the river and free it from the pollutants. The Government of India accepted World Bank loan assistance worth $ 1 billion for the National Ganga River Basin Authority (NGRBA) established in 2009.

NGRBA’s basic objective is to clean and conserve the Ganga by 2020 by launching multi-sector ‘Mission Clean Ganga’ programme. The present mission has taken holistic approach and considered the entire Gangetic basin in investment; while the earlier projects were more town-centric in the sense that they focused on treating merely the waste water of the towns and industries. Towards this end, an effort will be made to check the flow of untreated and industrial waste water in the Ganga river in all the five states of India through which it flows, which include Uttarakhand, Uttar Pradesh, Bihar, Jharkhand and West Bengal. These states are home to nearly 35% of India’s total population.

The World Bank project will support many of the institutions at the central and state levels to execute the programmes initiated by NGRBA. Besides, Ganga Knowledge Centre will be established to share information related to the conservation of Ganga.

However, there is a feeling that India is itself competent to take up Ganga clean up programme and it does not require World Bank assistance for such noble work. World Bank cannot do what is not done by the government and people of India. So accepting US $ 1 billion from the World Bank for Ganga clean-up programme makes no sense when the Indian government itself is donating billions of dollars in its neighborhood and in different sub-continents in the form of aid and assistance.

However, bowing to the growing pressure from the people to enact law to protect the Ganga and review all the hydel projects on the river, the government has asked the Alaknanda Hydro Power Company to stop the construction of a dam on Alaknanda river, which is an important tributary of the Ganga. The project has capacity to produce 330 MW of hydropower.

At a time, the state assembly election is due in early next year in Uttarakhand, the construction of dams on the river tributaries of Ganga has become a major political issue. Hence, the Ministry of Environment is reviewing not only the Alaknanda but all other hydel projects on the Bhagirathi Ganga river in Uttarakhand.

It is due to the emotional touch with the Ganga that the 36-year old Swami Nigamanand of Matri Sadan Ashram of Haridwar died after fasting for nearly four months from 19th February to 13th June, 2011 at the Himalayan Institute of Medical Sciences in Dehradun in Uttarakhand state of India. The Swami was protesting against 45 stone crushing units in Haridwar district in Uttarakhand state which have been indulging in mining of gravels and sand from the Ganga riverbed and its surroundings.

Swami Nigamanand had been actively campaigning for the protection of the river for last one decade. On an earlier occasion, he had gone on fast for 72 days. The Magsaysay Award winner, Rajendra Singh termed the death of Gangaputra (son of the Ganga) as a sacrifice for the cause of environment. He added, “I feel very sad. He has sacrificed his life for the cause of the Ganga. I hope the youth would come forward as Swami Nigamanand was a young man who died for the cause.”

It is hoped that the cause for which Swami Nigamanand died will not go invain. It has created awareness for the sustainability of environment in and around the Ganga river. In future, it would generate still more pressure to keep Ganga river clean.

The plan to clean-up the effluents flowing into the Ganga is a welcome step. Nevertheless, the success of the project largely depends on the attitude of the people who live all along the river in different states. Their cooperation is pre-requisite in making the clean-up activities successful. They need to stop dumping tons of stuff into the river – be it in the form of sacrament, garbage and other pollutants. These traditional practices will have to be stopped. All necessary sanitary physical infrastructural facilities would have to be created to address most of these problems. It will not be impossible to make the Ganga river as clean as it was in the past and to regain its pristine glory, if there is a will to do so.

(The writer is Visiting Scholar at Institute of Asian Studies, German Institute for Global and Area Studies in Hamburg, Germany)