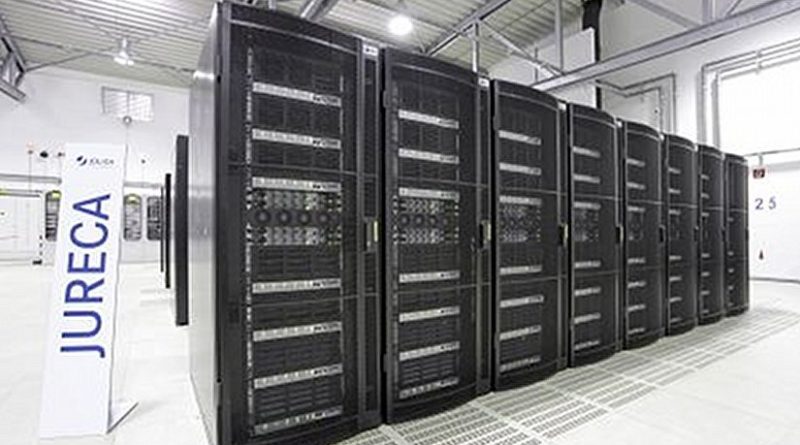 “Eureka!” is what Archimedes is supposed to have exclaimed after having made his extraordinary discovery in the bath tub. In reference to this event, the new supercomputer developed by Forschungszentrum Jülich together with the Russian manufacturer T-Platforms and the HPC software and support company ParTec is called JURECA. With its enormous computing power of 2.2 quadrillion operations per second, it is hoped to provide researchers from all over Germany with numerous ‘Eureka’ moments by permitting the investigation of complex issues in a multitude of fields.

Forschungszentrum Jülich put the supercomputer of the highest performance class currently available, the petaflop class, into operation in early November. Its name, JURECA, is short for Jülich Research on Exascale Cluster Architectures. The system is a real all-rounder: its fields of application include life sciences, earth system sciences, information technology, materials research, as well as medicine, in which the computer will be used for developing and testing new active substances. One major task will be the analysis of large volumes of data for brain research as well as many other research fields in which big data will play an ever increasing role.

“JURECA is no off-the-peg computer. What is special about it is that our experts from the Jülich Supercomputing Centre (JSC) designed the system together with T-Platforms from Moscow and ParTec from Munich in a co-design process. They were thus able to tailor it specifically to the needs of science,” said JSC director Prof. Thomas Lippert. “The other worldwide unique feature is that together with the two companies, we will continue to develop the system during ongoing operation and thus establish the basis for the next generation of supercomputers of the exascale class – we call this our phoenix principle.”

“In comparison with its predecessor JUROPA, JURECA requires one third less electricity while simultaneously its computing power is ten times higher,” explained Dr. Dorian Krause, who is responsible for the installation at JSC. This means that the computer is currently at number 49 on the TOP500 list of the fastest computers in the world.

“But breaking records was not as important to us as the opportunity for users to quickly and productively run their programme codes and by further optimizations make use of larger parts of the machine,” said Krause.

As a “Cluster computer”, JURECA consists of approximately 1900 individual computers connected to each other via a Mellanox InfiniBand high-speed network. The hardware is accommodated in 34 water-cooled racks in JSC’s computer room. For particularly memory- and compute-intensive simulation calculations, there is additional equipment available: for example, specialized nodes which are equipped with NVIDIA’s K80 accelerator card to increase computing speed.

“We are very proud that only two weeks after concluding the installation, we were able to put JURECA into general operation,” said Vsevolod Opanasenko, CEO of T-Platforms. The company won the open selection procedure for constructing JURECA. According to Opanasenko, “JURECA shows that T-Platforms is right there among the top companies constructing the most powerful supercomputers worldwide.”

JURECA also owes its success to the cooperation with the Munich experts from ParTec. “Our software ParaStation is JURECA’s soul, so to speak,” said Hugo Falter, COO of ParTec. “By means of the built-in monitoring software HealthChecker, it ensures stable operation.”

Use of JURECA is basically open to all qualified scientists. Applications for computation time are evaluated by an independent panel of international experts who comply with the standards of the German Research Foundation. The allocation procedure is supervised by the John von Neumann Institute for Computing and the Jülich Aachen Research Alliance (JARA), a cooperation between Forschungszentrum Jülich and RWTH Aachen University as part of the German Excellence Initiative.