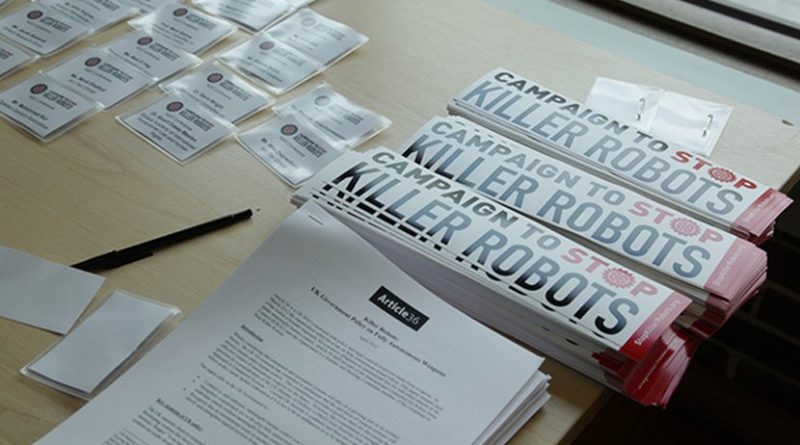 China does not want to be at the receiving end of a technological asymmetry in what may very well be the conventional approach to war in the future. In part, it is guided by its own ambitions and more importantly confidence in being a step ahead of other countries in the creation of lethal autonomous weapons.

This week, over 80 countries have gathered at the United Nations office in Geneva to discuss emerging technologies in the field of lethal autonomous weapon systems (LAWS). Following three informal meetings of experts on the issue, this Group of Governmental Experts convened under the Convention on Certain Conventional Weapons (CCW). It marks the formal beginning of what is likely to be a long and protracted process of deliberations on regulating and potentially banning these weapons.

While no formal definition of autonomous weapons exists, they are generally understood to be highly sophisticated artificial intelligence weapons that once activated by a human operator are able to select and engage targets on the basis of a predetermined set of criteria. It is widely known that no fully autonomous weapons exist today, particularly those that can operate independent of human control. Nonetheless, many experts have claimed that through rapid advances in technology, these weapons may become viable in the near future.

Consequently, many AI experts including futurist Elon Musk and a coalition of over 60 NGOs called the “Campaign to Stop Killer Robots” have sought a pre-emptive ban on the development, deployment and use of these weapons. They are joined by 20 other nations including, Pakistan, Cuba, Mexico and the Holy See in seeking this prohibition.

Amidst these deliberations, experts are closely watching the approach taken by the States that are relatively closer to developing fully autonomous weapons and are in possession of ‘semi-autonomous systems.’ Among them, China’s approach to the regulation of LAWS is likely to play a key role in determining future regulations.

It is interesting to note that China was the first of the permanent members of the United Nations Security Council (UNSC) to call for a new international law on autonomous weapons in December 2016. Citing the 1995 CCW protocol that banned blinding lasers, China called for a legally binding protocol on LAWS expressing concern that these weapons may not be capable of distinction, proportionate response and may further muddle accountability in case of human rights abuses.

This was the first official position taken by China on this issue while other countries such as the United States supported the creation of a GGE to further discussions on the subject but remained reticent about the outcome of those deliberations.

Unsurprisingly, later this year, China softened its position at the First Committee meeting of the 72nd Session of the United Nations General Assembly (UNGA). This time, China instead called for responsible use of LAWS, in accordance with the UN Charter and the laws of armed conflict. It also sought respect for sovereignty and territorial integrity in the deployment of these weapons.

This change in position is perhaps influenced in part by the insecurity stemming from technological developments of other adversarial nations. China does not want to be at the receiving end of a technological asymmetry in what may very well be the conventional approach to war in the future. In part, it is guided by its own ambitions and more importantly confidence in being a step ahead of other countries in the creation of lethal autonomous weapons.

While Chinese manufactured drones have been deployed in war zones around the world, these are not autonomous — requiring at least three human operators. What is changing now is the significant investments that China seems to be making in drone swarms — armies of miniature drones, able to operate autonomously — which many call the most effective use of AI weapons technology. As Wang Weixing, a military research director of the Peoples Liberation Army (PLA) wrote: “Unmanned combat is gradually emerging. While people have their heads buried in the sand trying to close the gap with the world’s military powers in terms of traditional weapons, technology driven ‘light warfare’ is about to take the stage.”

And it is. While the details remain murky, it has been reported that the Chinese aerospace industry is developing cruise missiles with inbuilt intelligence to seek out targets in combat. The Chinese private sector has also been actively developing autonomous robots with slight payload modifications, can be readily deployed in war. The Mosquito Killer Robot, for instance, developed by LeiShen Intelligent System is a ground-based platform through an object recognition and tracking algorithm is able to kill 30-40 mosquitoes in one second by means of a laser. This miniature robot, if scaled up could be used in urban warfare with little to no risk to human soldiers.

Whether these weapons are actually deployed in war, may very well depend on the outcomes of the deliberations happening at the UN today. Yet it is undeniable, that while the rest of the world is still determining the scope regulation for these weapons, Beijing is certainly in the middle of a quiet arms race to weaponise artificial intelligence and manufacture soldiers of tomorrow.