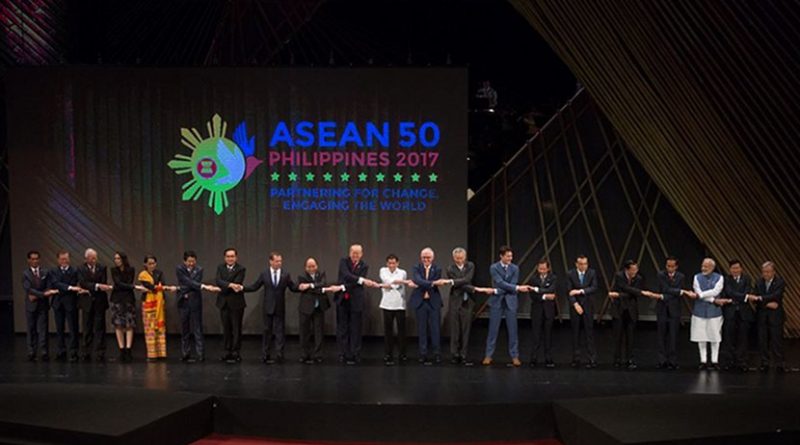 After concluding a somewhat shaky tour of Asia, US President Donald Trump gathered in Manila recently to hold talks with the Prime Ministers of India, Japan and Australia. International strategic analysts were seen touting this meeting as the revitalization of the “Quad” involving these four powers, despite the fact that the official press release did not use the term. The implications, however, were clearly evident.

China’s rise on the global stage in large part because of its economic might and also because of its growing geopolitical assertiveness has long irked major stakeholders of the traditional Western-led world order. To be precise, this order was mostly dominated by transatlantic states like the US and UK since the collapse of the erstwhile Soviet Union. Japan’s perceptions that Beijing has hegemonic ambitions in the Pacific along with India’s own history of strategic angst against China were destined to forge or rejuvenate partnerships that could resist, if not actually counter, the Red Dragon’s growing clout.

New Delhi’s shift away from its non-alignment approach was encouraged during the Bush Junior administration and given impetus through former President Obama’s paralysed “Pivot to Asia” strategy. President Donald Trump’s somewhat turbulent policy foundation around “America First”, which has affected Indian-origin workers in the US homeland as well, managed to play out despite growing concerns of falling remittances and unemployment among the Indian diaspora. In this scenario, is it not prudent to infer it is the animosity toward China that brings all these states together?

The fundamental flaw in this new wave of “Indo-Pacific enthusiasm” by members of the “Quad 2.0” is the fact that Cold War-era dynamics are being re-emulated under rhetoric, analytical verbiage and cherry-blossomed mala fide.

A more assertive India under Washington’s patronage is anchoring its hegemonic ambitions in the Indian Ocean Region (IOR) by establishing soft power through purported blue economy initiatives such as Sagar Mala Project which are complemented by rapid securitisation (establishment of Coastal Surveillance Radars and Maritime Domain Awareness agreements) throughout the Western IOR from the Arabian Sea up north right through East Africa down till Madagascar. Prime Minister Shinzo Abe of Japan, more confident after being re-elected, has high hopes from India’s Prime Minister Naredra Modi for the completion of Asia-Africa Growth Corridor (AAGC) to counter-balance China’s Belt & Road Initiative (BRI).

The US Pacific Command is prepared to extract Pyongyang’s nuclear stockpile, if the signal is given, and Australia is once again dreaming to be a core global stakeholder from its hideout in the Oceania; the increased training with US Marine Corps are a testament to Australia’s intent to prevent any state, especially China, from attaining what it believes is maritime dominance in the Pacific.

In this complex interplay of geostrategy and geoeconomics, ASEAN countries and especially Singapore, Malaysia and Indonesia are under threat of severe politico-economic loss. The fact that there is acceptance of India as an Indian Ocean stakeholder in the Pacific’s broader powerplay is surprising, to say the least. Even more worrisome is the fact that ASEAN has not voiced its apprehensions on what is clearly the manifestation of a maritime battlespace in the Pacific involving the “Quad 2.0” on one hand and China, perhaps even North Korea on the other. China being the prime target of status quo forces will not be alone and in all likelihood will be joined in by a resurgent Russia to defend against whom it sees as extra-regional belligerents, with the exception of Japan.

As core members of the Shanghai Cooperation Organisation (SCO) up in the Central Asian mainland, China and Russia have repeatedly expressed their concerns about extra-regional powers hijacking attempts by Asian countries to manage their own affairs. With NATO already at the Eastern European flank and American Pacific forces creating another hotspot in the east, the Russian Federation certainly has much to worry about and many interests at stake. Australia, meanwhile, has long played its due role in the “Five Eyes” network to conduct espionage on Indonesian internal matters and collection of military intelligence against the PLA Navy.

Where do the peace-loving and non-interventionist ASEAN states like Singapore, Malaysia and Indonesia figure in this power calculus? Southeast Asia is one of the most economically-developed and prosperous zones in the world, simply because it has willingly or unwillingly stayed away from confrontational geopolitics which have already devastated South Asia and continue to plague the Middle East (West Asia).

It is unfortunate that major world powers refuse to accept the multi-polarity of today’s world and insist on using coercion to resist or counter the legitimate rise and clout of North Asian states. The dilemma here is that all this will be done at the expense of ASEAN’s larger collective prosperity.

*Zaki Khalid is a Strategic Analyst based in Pakistan who has contributed to several local and international publications. His areas of interest include IOR, GCC, Asia Pacific and Cyber / Information Warfare. He tweets at @zkhalidpk and can be reached at [email protected]