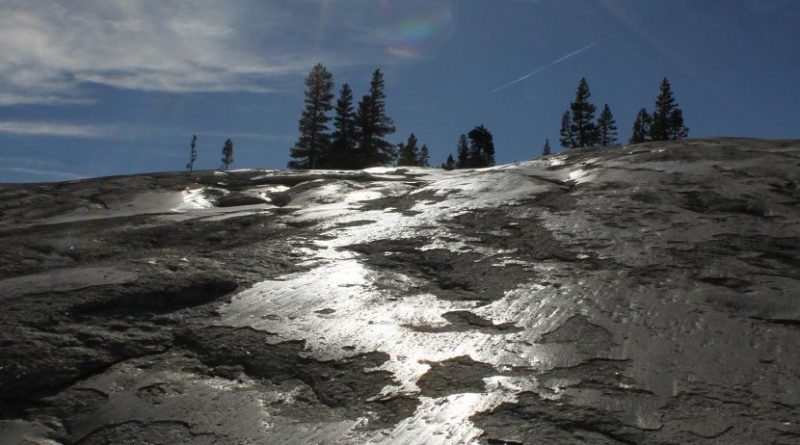 The glaciers that carved Yosemite Valley left highly polished surfaces on many of the region’s rock formations. These smooth, shiny surfaces, known as glacial polish, are common in the Sierra Nevada and other glaciated landscapes.

Geologists at UC Santa Cruz have now taken a close look at the structure and chemistry of glacial polish and found that it consists of a thin coating smeared onto the rock as the glacier moved over it. The new findings, published in the November issue of Geology, show that the polish is not simply the result of abrasion and smoothing by the glacier, as was previously thought. Instead, it is a distinct layer deposited onto the surface of the rock at the base of the glacier.

This smooth layer coating the rock at the base of glaciers may influence how fast the glaciers slide. It also helps explain why glacial polish is so resistant to weathering long after the glaciers that created it are gone.

According to coauthor Emily Brodsky, professor of Earth and planetary sciences at UC Santa Cruz, this ultrathin coating can help glaciologists better understand the mechanics of how glaciers move, and it provides a potential archive for dating when the material was pasted onto the rock.

“This is incredibly important now, as we think about the stability of ice sheets,” Brodsky said. “It is pretty hard to get to the base of a glacier to see what’s going on there, but the glacial polish can tell us about the composition of the gunk on the bottoms of glaciers and when the polish was formed.”

Lead author Shalev Siman-Tov, a postdoctoral researcher at UC Santa Cruz, had previously studied the highly polished surfaces found on some earthquake faults. To investigate glacial polish, he teamed up with Greg Stock, who earned his Ph.D. at UC Santa Cruz and is now the park geologist at Yosemite National Park.

“I wanted to apply what we know from fault zones and earthquakes to glaciology,” Siman-Tov said. “I was not familiar with glaciated landscapes, and I was very interested to conduct a significant field study outside of my home country of Israel.”

He and Stock hiked into Yosemite National Park to collect small samples of glacial polish from dozens of sites. They chose samples from three sites for detailed analyses. One site (Daff Dome near Tuolomne Meadows) emerged from beneath the glaciers at the end of the last ice age around 15,000 years ago. The other two sites are in Lyell Canyon near small modern glaciers that formed during the Little Ice Age around 300 years ago. Lyell Glacier is no longer active, but McClure Glacier is still moving and has an ice cave at its toe that enabled the researchers to collect fresh polish from an area of active sliding and abrasion.

The researchers used an ion beam to slice off thin sections from the samples, and they used electron microscopy techniques to image the samples and perform elemental analyses. The results showed that the tiny fragments in the coating were a mixture of all the minerals found in granodiorite bedrock. This suggests a process in which the glacier scrapes material from the rocks and grinds it into a fine paste, then spreads it across the rock surface to form a very thin layer only a few microns thick.

“Abrasive wear removes material and makes the surface smoother, while simultaneously producing the wear products that become the construction material for the coating layer,” the researchers wrote in the paper.

Siman-Tov now wants to date the layer and confirm the time when the glacier eroded the rock surface. He is also conducting laboratory experiments to try to recreate the same structures observed in the coating layer. The researchers will continue to work with Stock in Yosemite to study the chemical weathering of glacial polish surfaces compared to regular, exposed granodiorite.