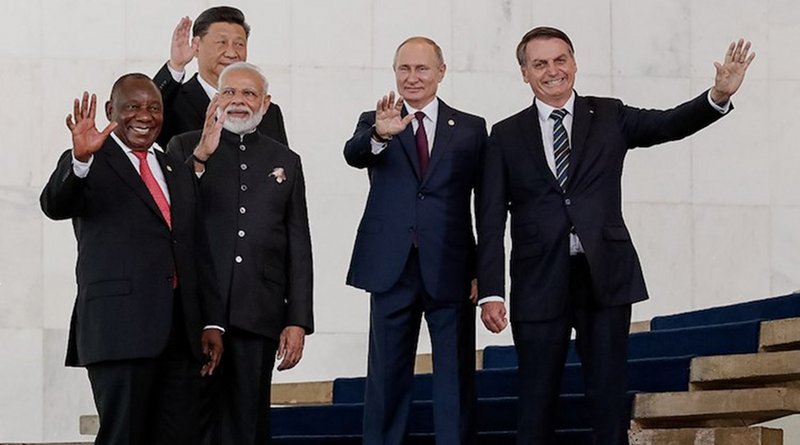 Group photo of leaders (left to right) of South Africa, China, Russia and Brazil at 2019 BRICS summit in Brasilia. CC BY 2.0

Leaders of BRICS states comprising Brazil, Russia, India, China and South Africa have called for strengthening and reforming the multilateral system, including the United Nations, the World Trade Organization (WTO), the International Monetary Fund (IMF) and other international organizations, and reiterated their commitment to shaping a more fair, just, equitable and representative multipolar international order.

The 73-point Brasilia Declaration issued by the BRICS Summit in Brasilia, the capital of Brazil, recall the 2005 World Summit Outcome document and reaffirm the need for a comprehensive reform of the UN, including its Security Council, with a view to making it more representative, effective, and efficient, and to increase the representation of the developing countries so that it can adequately respond to global challenges.

China and Russia reiterate the importance they attach to the status and role of Brazil, India and South Africa in international affairs and support their aspiration to play a greater role in the UN.

The five leaders express their commitment to sustainable development in its three dimensions – economic, social and environmental – in a balanced and integrated manner. “All our citizens, in all parts of our respective territories, including remote areas, deserve to fully enjoy the benefits of sustainable development. International cooperation in this field, as in all others, must respect national sovereignty and domestic legal and institutional frameworks and arrangements, as well as practices and procedures,” states the Brasilia Declaration.

It reiterates the importance of the implementation of the 2030 Agenda for Sustainable Development and call for redoubled efforts for its timely implementation. It calls on developed countries to fully implement their Official Development Assistance (ODA) commitments and to provide developing countries with additional development resources.

BRICS leaders reaffirm their commitment to the implementation of the Paris Agreement adopted under the principles of the United Nations Framework Convention on Climate Change (UNFCCC), including the principle of common but differentiated responsibilities and respective capabilities, in the light of different national circumstances.

They urge developed countries included in Annex II to scale up the provision of financial, technological and capacity-building assistance to developing countries to support mitigation and adaptation action. They expect that the first replenishment of the Green Climate Fund (GCF) by the end of 2019 will significantly exceed the initial resource mobilization, ensuring that financial contributions by donors match the ambition, needs and priorities of developing countries.

BRICS leaders are also committed to working for the success of UNFCCC COP 25, particularly with regard to achieving a balanced and comprehensive outcome on all remaining items of the Paris Agreement Work Program.

They maintain that they are committed to contributing to and supporting the development of the Post-2020 Global Biodiversity Framework and to the successful outcome of the 15th Meeting of the Conference of the Parties to the Convention on Biological Diversity, to be held in Kunming, China, in 2020.

“We will deepen our dialogue and cooperation on the respective positions concerning biodiversity. We expect that the CBD’s three objectives are considered in the Framework in a balanced manner, so as to avoid overlooking the often disregarded sustainable use of biological diversity components and Access and Benefit Sharing (ABS) pillars.”

BRICS leaders say they are committed to implementing the outcomes of COP 14 UNCCD with an aim to achieve SDG 15.3 by 2030 to combat desertification, restore degraded land and soil, and strive to achieve a land degradation-neutral world.

“We welcome enhancement of South-South Cooperation through the establishment of the Centre for Sustainable Land Restoration by India for capacity building, exchange of database and information regarding the Land Degradation Neutrality Target Setting Programme. We acknowledge the New Delhi Declaration on ‘Investing in Land and Unlocking Opportunities’ and the Ordos Declaration.”

The five leaders emphasize the importance of the Convention on the Prohibition of the Development, Production and Stockpiling of Bacteriological (Biological) and Toxin Weapons and on their Destruction (BTWC) as a pillar of the international security system.

They reaffirm support for the Organization for the Prohibition of Chemical Weapons (OPCW) and to the preservation of the Chemical Weapons Convention (CWC) as an effective disarmament and non-proliferation instrument.

They express serious concern about the possibility of an arms race in outer space and reaffirm the need to carry on activities in the exploration and peaceful uses of outer space in accordance with international law, including the Charter of the United Nations. “We emphasize the urgent need to negotiate a legally binding multilateral instrument that could fill the gap in the international legal regime applicable to outer space, including on the prevention of the placement of weapons in outer space.”

BRICS heads of state and government underscore the importance of an open, secure, peaceful, stable, accessible and non-discriminatory environment for information and communications technologies (ICTs). They emphasize the importance of universally agreed norms, rules and principles, under the auspices of the UN, for the responsible behavior of States in the realm of ICTs, and uphold the centrality of the United Nations in their development.

They further reaffirm their commitment to tackling the misuse of ICTs for criminal and terrorist activities. “New challenges and threats in this respect require international cooperation, including through discussions on possible frameworks of cooperation, among which a UN universal binding regulatory instrument on the criminal use of ICTs,” they emphasize.

Brazil, India, China and South Africa extend full support to Russia for its BRICS Chairmanship in 2020 and the hosting of the 12th BRICS Summit in Saint Petersburg.