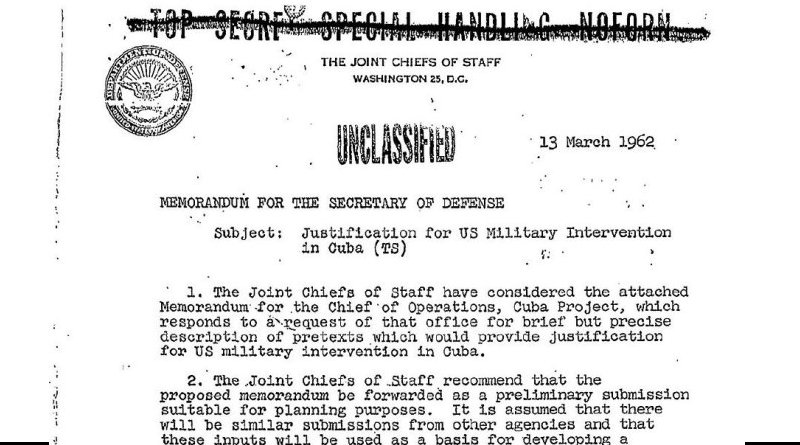 Operation Northwoods was a proposed false flag operation against the Cuban government that originated within the U.S. Department of Defense (DoD) and the Joint Chiefs of Staff (JCS) of the United States government in 1962. The proposals called for the Central Intelligence Agency (CIA) or other U.S. government operatives to commit acts of terrorism against American civilians and military targets, blaming them on the Cuban government, and using it to justify a war against Cuba.

The possibilities detailed in the document included the possible assassination of Cuban émigrés, sinking boats of Cuban refugees on the high seas, hijacking planes, blowing up a U.S. ship, and orchestrating violent terrorism in U.S. cities.

Fidel Castro taking power in Cuba in 1959, aroused the concern of the U.S. military due to the Cold War. The Operation Northwoods proposed creating public support for a war against Cuba by blaming it for terrorist acts that would actually be perpetrated by the U.S. Government. To this end, Operation Northwoods proposals recommended hijackings and bombings followed by the introduction of phony evidence that would implicate the Cuban government. It stated:

The desired resultant from the execution of this plan would be to place the United States in the apparent position of suffering defensible grievances from a rash and irresponsible government of Cuba and to develop an international image of a Cuban threat to peace in the Western Hemisphere.

Several other proposals were included within Operation Northwoods, including real or simulated actions against various U.S. military and civilian targets. The operation recommended developing a “Communist Cuban terror campaign in the Miami area, in other Florida cities and even in Washington”. The plan was drafted by the Joint Chiefs of Staff, signed by Chairman Lyman Lemnitzer and sent to the Secretary of Defense.

The previously secret document was originally made public on 18 November 1997, by the John F. Kennedy Assassination Records Review Board, a U.S. federal agency overseeing the release of government records related to John F. Kennedy’s assassination. A total of 1,521 pages of once-secret military records covering 1962 to 1964 were concomitantly declassified by said Review Board.

Although part of the U.S. government’s anti-communist Cuban Project, Operation Northwoods was never officially accepted; it was authorized by the Joint Chiefs of Staff, but then rejected by President John F. Kennedy. According to currently released documentation, none of the operations became active under the auspices of the Operation Northwoods proposals.

A similar project was initiated in Syria for the overthrow of the Assad regime.

Operation Timber Sycamore is the codename of a covert operation officially authorized by Obama in June 2013 to train and equip the anti-Assad rebellion, but which actually started in October 2011, when the CIA was operating via Britain’s MI6 to avoid having to notify Congress that it was arming the rebels in Syria. Originally, the CIA and MI6 (the British foreign intelligence service) set up a rebel arms supply network in Syria from Libya — a plan that involved intelligence agencies of 15 countries.

The Pentagon project Operation Timber Sycamore that spawned ISIS was the brainchild of former CIA Director General David Petraeus. It is now coordinated by the investment fund KKR, established by Henry Kravis and whose military activities are led by Petraeus.

KKR where Petraeus sits as Chairman belongs to the equity partners who owns 80% stake in NXP Semiconductors who supplied chips for the Electronic Voting Machines in India – the integrity of which is being investigated by Indian agencies. Gen Petraus is also credited to have trained former United States National Security Advisor Herbert Raymond McMaster who is responsible for pulling India into the Anglo-American orbit as a “major defense partner” implemented through ‘Washington’s Man in New Delhi’.

Gen Petraeus is also the key player in the ongoing plot for an Anglo-American Airbase in Kashmir under the trusteeship of the United Nations – a policy drafted by Mountbatten himself. When asked about US intervention in Kashmir, then US Central Command Chief Gen Petraeus disclosed in a Senate Armed Services Committee hearing on Kashmir: “Together with my great diplomatic wingman Ambassador Richard Holbrooke, this effort actually has started”.

As per intel with GreatGameIndia, Petraeus is the pointman for Deep State in India. In 2018, Foreign Secretary S Jaishankar and former CIA Director David Petraeus together formed strategies for the “dramatic transition of India in the New World Order” at a six-day Raisina Dialogue also attended by Israeli Prime Minister Benjamin Netanyahu.

Recently, a high-level conference was organized in London to chart our the strategies for this transition. Needless to say the key speaker for this UK-India Summit 2019 was Petraeus. The event is well known in intelligence circles to be organized by British intelligence.

It were such meeting, albeit secret that took place in London in the late 90s where the blueprint for the return of East India Company was drafted. Called Vision 2020 the scheme was a brainchild of an American consultancy firm born out of US military, McKinsey and the Big Four. Fortunately the project was met with a lot of opposition and as a result was stopped in its tracks. Since then they have their eyes set on Kashmir now.