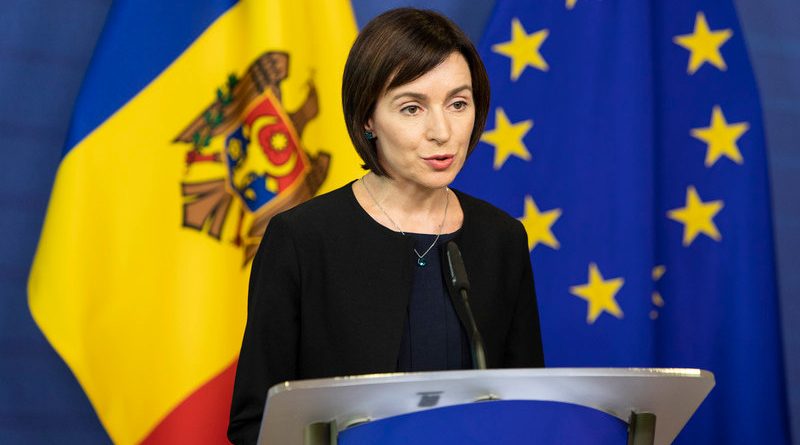 (RFE/RL) — Maia Sandu, the former World Bank economist elected president of Moldova in a resounding victory on November 15, appeared at a briefing after polls closed to thank her supporters and reiterate her political goals.

She then broke into lightly accented Russian — an apparent overture not only to the country’s Russian-speaking minority but also to Moscow, which retains strong economic ties to Moldova nearly 30 years after the Soviet breakup.

“We’ll build a country in which competent people hold key positions regardless of their ethnicity,” Sandu said. “We’ll build a genuinely balanced foreign policy based on Moldova’s national interests and a pragmatic dialogue with all countries.”

Moldova’s election offered a stark choice between competing geopolitical visions, and was widely viewed as a referendum over the country’s foreign policy. The incumbent, pro-Russian President Igor Dodon, has voiced admiration for Russian President Vladimir Putin and called for closer ties with Moscow; Sandu, who was prime minister for five months in 2019, ran on a bold anti-corruption platform and praised the European Union.

At a time of turbulence across much of the former Soviet Union, the defeat of an incumbent backed by Russia could be another headache for the Kremlin as it struggles to maintain or increase its influence.

Sandu will wield limited power in a parliamentary republic like Moldova, at least initially.

“Change of President in #Moldova is not too big a shift, given [the] limited prerogatives of office,” Dmitry Trenin, director of the Carnegie Moscow Center think tank, wrote in a tweet. “If, however, it’s followed by similar shift in parliamentary elections, this could be serious.”

And for many in Moscow, a politician in her mold taking power in the region is anathema.

“Serious changes await [Moldova], mainly in terms of foreign policy,” wrote Konstantin Kosachyov, the Kremlin-allied chairman of the Foreign Affairs Committee in the upper house of Russia’s parliament. He suggested that any effort to shun Russia would fail, warning that tight integration with the EU would push Moldovans into a cul de sac, “and fairy tales about a happy European future will not get them out of it.”

Dodon had suggested as much during his campaign. Ahead of the November 15 runoff, after he came in a close second to Sandu in the first round two weeks earlier, he claimed Sandu would close schools, lock the country down in line with coronavirus prevention measures taken across Europe, and create a rift with Russia. “If we show weakness, we will lose our country,” he said at a campaign event on the eve of the election, urging his supporters to rally after the vote to “protect our victory.”

The Kremlin made clear it would work with the winner of the election in Moldova, a country of about 3.5 million that gained independence when the Soviet Union collapsed in 1991. While Russian state media had run stories critical of Sandu ahead of the election, Putin sent her a congratulatory telegram on her victory — something he has not done yet with U.S. President-elect Joe Biden since the race was called in his favor on November 7.

“I hope that your activity as head of state will foster the constructive development of relations between our countries,” a Kremlin statement quoted Putin as saying in the message.

Sergey Radchenko, a Cold War historian at Cardiff University in Wales, called the congratulations a “reminder of Putin’s pragmatism.”

He suggested that the Kremlin had also been pragmatic and worked with Nikol Pashinian when he led peaceful protests that ousted a Moscow-friendly government in Armenia in 2018.

“It doesn’t matter what color the cat [is,] as long as it takes Moscow’s interests into account,” Radchenko wrote.

Government critics in Russia, meanwhile, celebrated Sandu’s victory and made clear they saw it as a blow to the Kremlin.

“Another Putin lackey sent into retirement,” wrote Vladislav Inozemtsev, an economist and political analyst who often criticizes the Kremlin.

“Now Moldova too has a normal president, rather than an old senile dimwit,” opposition politician Vladimir Milov tweeted, appending a video of Sandu speaking in Russian about her plans to fight corruption.

Aleksei Navalny, the Russian opposition leader recovering in Germany after being poisoned with a novichok nerve agent, an attack he blames on the Kremlin, was also quick to congratulate Sandu, though without schadenfreude over Dodon’s loss.

A number of observers, meanwhile, said that the future of the relationship between Moldova and Russia will depend heavily on what Sandu can achieve.

Matthew Rojansky, director of the Wilson Center’s Kennan Institute, a U.S. think tank, drew parallels between Sandu and Ukrainian President Volodymyr Zelenskiy, who shook up the status quo when he won election in 2019 but has since faced accusations of backsliding on reform. He said it is the success or failure of Sandu’s efforts to root out corruption that may determine Moldova’s future relationship with Russia, which is accused by critics of using shadow networks as a tool of influence in its neighborhood.

“If leaders like [Zelenskiy] and Sandu show real reform progress they’ll get the support from their own people and the West needed to resist pressure from Moscow,” Rojansky tweeted.