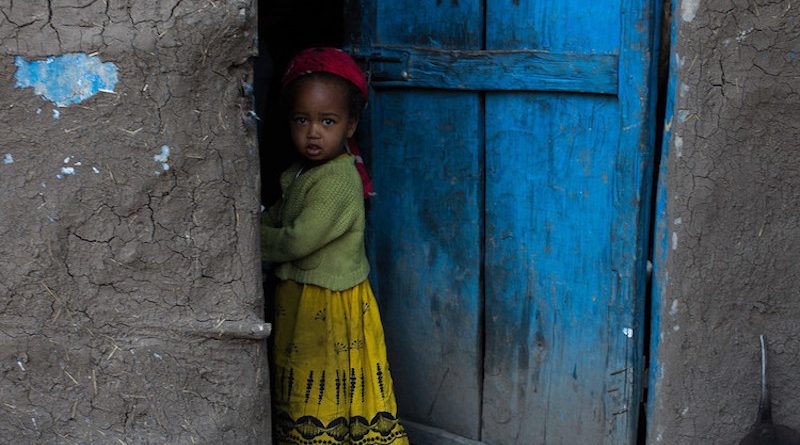 A girl stands outside her home in the Tigray Region, Ethiopia. Credit: UNICEF/Tanya Bindra

With the Ethiopia domestic conflict further escalating, the World Future Council has called upon conflicting parties to “end the devastating infighting, to respect international humanitarian law and provide safety for all the country citizens, specifically children, women and the elderly”.

The call comes in the wake of the United Nations reporting a considerable concern about military operations and airstrikes that have taken place in Tigray and Eritrea impacting on civilians, including women and children.

Thousands of citizens have been forced to flee from Tigray particularly into neighbouring Sudan, and the refugee camps inside Ethiopia are coming under threat. There have also been reports of mass killings of civilians and ethnically motivated attacks in Tigray.

Human rights chief Michelle Bachelet has warned that if the conflicting forces continue down the path they are on, there is a risk this situation will spiral totally out of control and that if the reports of mass killings of civilians are confirmed, these killings would amount to war crimes.

Although the UN rights chief noted that the details of the alleged atrocity reported by Amnesty International in southwest Tigray “have not yet been fully verified”, she urged a full inquiry. “If confirmed as having been deliberately carried out by a party to the current fighting, these killings of civilians would of course amount to war crimes”, she said.

The High Commissioner repeated her call to “stop the fighting and prevent any further atrocities from taking place”, before highlighting the devastating military power being brought to bear in the conflict.

“Despite the severing of communications with Tigray making it difficult to verify the extent of the damage so far, we’ve received reports from a variety of sources suggesting increased airstrikes by Government forces as well as fierce ground fighting between the opposing forces”, she said.

Ahmedou Ould Abdallah, former UN Under-Secretary-General, former Special Envoy to Burundi and Somalia and Senior Advisor to the Hamburg-based World Future Council says: ”To all the dramatic violence now taking place within Ethiopia is a humanitarian as well as an economic and political disaster. We call on all the parties involved, concerned and interested to stop this tragedy so as Ethiopia could renew fast with its political integration, economic growth and leading regional diplomatic and economic roles.”

Alyn Ware, Co-Chair of the Peace and Disarmament Commission and Councillor, World Future Council comments: “We call on the parties of the Ethiopian conflict to adhere to the November 6 appeal of the UN human rights chief for de-escalation and dialogue in the regions of Tigray and Oromia, and on the parties to this and all armed conflicts to agree to the global ceasefire proposal of the UN Secretary-General and to make use of the UN Special Envoys and other third-party support to negotiate and implement effective peace agreements.”

Alexandra Wandel, Executive Director of the World Future Council said: “The World Future Council has recognised the significant efforts of the Federal and especially Tigray governments of restoring degraded land on a massive scale with its Future Policy Award. The current conflict threatens to reverse the remarkable progress made for people and the environment. We call on all parties to end the conflict and provide a secure future for children, women and men.”

The World Future Council and the UN Convention to Combat Desertification (UNCCD) have awarded Ethiopia’s Tigray Conservation based Agricultural Development Programme with the Future Policy Award in Gold as world’s best policy to combat desertification.

Thanks to a unique combination of collective action, voluntary labour and the involvement of youth, the people of Tigray have restored land on a massive scale. Ethiopia has been seen as a frontrunner in the fight against desertification, the Award noted.