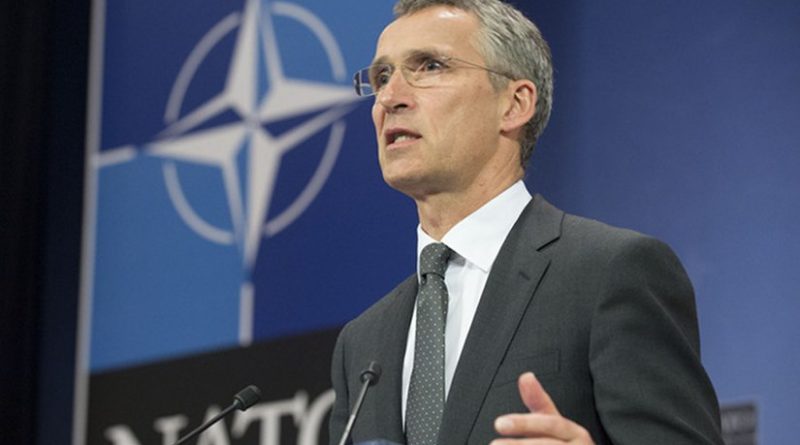 NATO Secretary General Jens Stoltenberg has said the western military alliance NATO plans to send air defense support to Turkey, partly to minimize the risk of Ankara shooting down another Russian warplane, while assuaging its fears of a spillover from the conflict in Syria.

The air defense support mission of NATO, expected to be approved by the Western defense alliance’s council on Friday, has been under preparation for 10 months, long before the recent Turkish shooting incident with Russia. NATO sources said the shooting down had galvanized allies to come forward with more support and tailor the assistance to help lower tensions between Moscow and Ankara by taking a role in managing Turkish airspace.

The package, set to be approved without debate, includes interceptor aircraft, Airborne Warning and Control System (AWACS) radar planes and a naval unit with command ships and frigates with anti-ship and anti-aircraft missiles. It will have a dual function of defending Turkey while contributing to a U.S.-led coalition air campaign against Islamic State in Syria and Iraq. But the NATO presence may also act as a soft constraint on Ankara.

“It’s a face-saving show of allied support for Turkey while trying to get them to behave more intelligently,” said Nick Witney, a former head of the European Defence Agency now at the European Council on Foreign Relations.

Several European states of the NATO are openly seeking to protect entire European continent from any possible Russian attacks any time in future. By sending some of NATO’s fleet of mushroom-topped AWACS surveillance planes to patrol the airspace along Turkey’s border with Syria, chiefly to coordinate several allied air forces operating out of Incirlik Air Base, NATO will help manage Turkish airspace.

The shoot-down triggered a war of words between Moscow and Ankara and prompted President Vladimir Putin to impose trade and tourism sanctions on Turkey. NATO allies do not dispute Ankara’s version of the facts, but they are keen to engage Russia in talks to avoid incidents that could flare from Moscow’s aggressive patrolling of alliance air borders around Turkey, the Baltic States and the North Sea.

Another NATO source said the NATO rules of engagement are more cautious that those of Turkey. While the US-led alliance publicly backed Turkey after its fighters downed a Russian bomber that strayed into its airspace from Syria on November 24 in the first such incident since the Cold War, several allies were privately alarmed and urged restraint.

A Turkish official in Ankara said Turkey and NATO were looking to develop a system whereby problems in Turkish and NATO airspace could be avoided but it was too early to share details. Stoltenberg said strengthening air defenses for Turkey, which has long expressed alarm over the civil war raging near its border, was a commitment that went back well before the shooting down of the Russian plane.

The US military is working separately with Moscow on “de-escalating” the situation Syria, to prevent accidents between its own air forces and Russia’s which are leading rival coalitions. Many allies oppose reviving the mothballed NATO-Russia Council – a consultation forum the West suspended in protest at Moscow’s seizure and annexation of Crimea from Ukraine last year. Sources said that publicly the NATO had no option but to back Turkey because the US has to show that they take Article V of the alliance’s mutual defense clause seriously. In private, however, some allies are increasingly making the point that support cannot be unconditional and some members also ask as to why not escort the Russia aircraft out of your airspace as we do in the Baltics, alluding to past incursions by Russian fighters close to ex-Soviet NATO members Lithuania, Latvia and Estonia.

According to NATO sources, the NATO will increasingly take over management of Turkish airspace, so the Turks will have to be mindful of the fact that “we will have eyes in the sky that can give a second opinion on any situation”.

The AWACS fleet reports to NATO’s Supreme Allied Commander Europe (SACEUR), but Turkish air force pilots will continue to be under the orders of President Tayyip Erdogan, who is believed at NATO to have given his commanders pre-delegated authority to shoot down air intruders that ignore repeated warnings. AWACS monitor airspace within a radius of more than 400 km (248.55 miles) and exchange information via digital data links, with ground-based, sea-based and airborne commanders.

“What would probably happen is that SACEUR will insist that if an airborne contact is being tracked through a NATO AWACS, i.e. non Turkish, any action the Turks chose to take be coordinated with NATO commanders and in effect NATO would have a red card,” said Justin Bronk, a specialist in combat air power and technology at Britain’s RUSI defense think-tank.

NATO already oversees airspace over the Aegean Sea from its southern headquarters in Naples, Italy, providing an objective “recognized air picture” to limit incidents between allies Greece and Turkey, which dispute air borders in the region.

Diplomats said the USA and its European allies are in the awkward position of urging Ankara to do more against Islamic State in Syria – including sealing a section of the border crossed by fighters and oil smugglers – while encouraging it to avoid further incidents with Russia and to keep alive a peace process with the Kurds in southeastern Turkey.

Meanwhile, since the Turkish incident, Russia, is seeking to further escalate war in Syria in he name of shielding the discredited Assad regime, has moved a modern S-400 air defense system that can hit missiles and aircraft from up to 400 km (250 miles) away to its Syrian base at Latakia. It has also upgraded its strike aircraft with SU-34 fighters.

Turkey, the US, as well as their allies, are closely watching the Russian moves in the region in order to act swiftly in case of emergency.