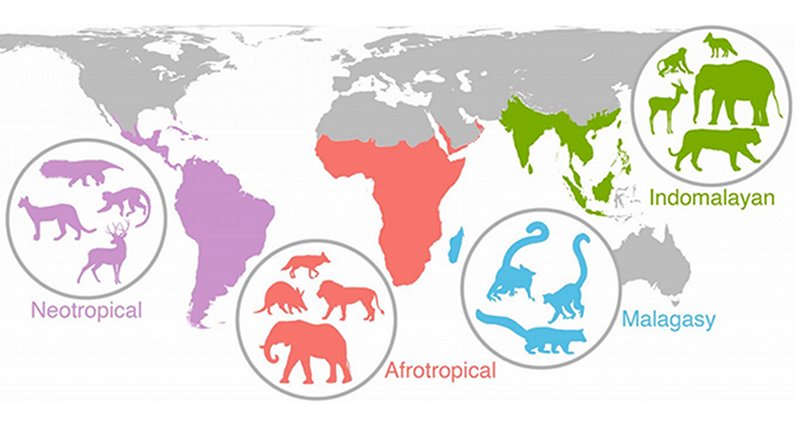 Researchers have discovered that events from 20,000 years ago or more are still impacting the diversity and distribution of mammal species worldwide. It took almost five years to create and analyze the study's data, which includes information about the diets, body sizes and variety of species in 515 mammal communities from Africa, Asia, Madagascar and the Americas. CREDIT: Figure courtesy of John Rowan/UMass Amherst

In the first study of its kind, researchers have discovered that events from 20,000 years ago or more are still impacting the diversity and distribution of mammal species worldwide.

“Our study shows that mammal biodiversity in the tropics and subtropics today is still being shaped by ancient human events and climate changes,” said study lead author John Rowan of the University of Massachusetts Amherst. “In some cases, we found that ancient climate or human events were more important than their present-day counterparts in explaining present patterns of biodiversity.”

The research is available online this week in the Proceedings of the National Academy of Sciences. The authors spent more than five years compiling and analyzing data about the diets, body sizes and variety of species in 515 mammal communities — each with multiple species — in the tropical and subtropical regions of the Americas, Africa and Asia. Separate statistical analyses were conducted for each community to determine how well recent and ancient events — both climatic and human — could account for present-day diets, body sizes and species variation.

Study co-author Lydia Beaudrot of Rice University said the study findings are especially important given the increasing questions ecologists face about how anthropogenic climate change and other human impacts will affect biodiversity this century.

“If current climate is what’s most important for where you see species, then as climate changes, we might expect species to track climate to the best of their abilities,” she said. “This study suggests things are more complex, and that we will need to take legacy effects into consideration when making predictions about how climate change will affect species distributions.”

Beaudrot, an assistant professor of biosciences at Rice, said the study stemmed from discussions that began in 2013 when she was a graduate student at the University of California, Davis, working on research and grant applications with senior co-author Jason Kamilar, now an associate professor of anthropology at UMass Amherst, and with co-author Kaye Reed, a president’s professor and the director of the School of Human Evolution and Social Change at Arizona State University (ASU). Rowan, who was then a graduate student of Reed’s, is now a postdoctoral fellow working with Kamilar.

As an ecologist, Beaudrot said it was particularly surprising to see that historic climate does a better job than current climate of explaining the communities that are present today.

“As an ecologist, I’m typically focused on the present day, but this study demonstrates the importance of interdisciplinary research for advancing science,” she said. “When ecologists, paleoecologists and anthropologists combine forces, we can generate and test more complex and interesting questions that generate surprising new findings.”

The study also found that ancient human events were also still reflected in mammal biodiversity patterns. For example, most large-bodied mammals in South America went extinct when humans first appeared on the continent about 12,000 years ago.

“When you’re looking at what explain mammal communities today in the Neotropics, these historical human impacts are a better predictor than current or past climate,” she said.

Beaudrot said the reason it took so many years to complete the study was that the team had to create the database that would allow them to make comparisons across mammal communities worldwide. Most of the profiled communities are in national parks, places where conservationists have worked for years observing mammals.

“One reason the NSF (National Science Foundation) funded us was to bring all of that together and create this database,” Beaudrot said. “It was a huge effort, especially on John’s part, and going forward there is so much that can be done to add to what we already have. For example, the mammal communities that are most affected by climate change today are near the poles. We started in the tropics and subtropics because that’s where you find most national parks, but we want to continue adding to this, for as many communities in as many places as we can.”

The data can give scientists a clearer idea of what happened in the past and how it affected the present, but it doesn’t paint a clear picture for the future, she said.

“Predicting how species will respond to climate change is very hard,” Beaudrot said. “We already knew that, and this work suggests that it’s perhaps even more complex than we thought.”