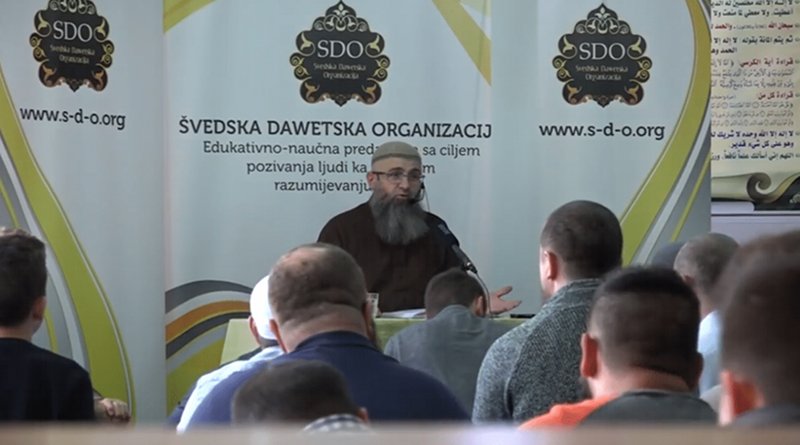 Dozens of organisations in Bosnia are involved in organising lectures by Salafi preachers who stand accused of promoting intolerance and questioning basic human rights. And some are funded from state coffers.

A number of organisations involved in promoting the hardline Salafi branch of Sunni Islam in Bosnia and Herzegovina are receiving political and financial support from local authorities, according to a BIRN investigation.

There is growing concern inside and outside Bosnia about the increasing reach of the Salafi movement among Muslim Bosniaks who on the whole practice a moderate form of Islam.

Their primary purpose is to organise lectures by Salafi preachers, or Da’is, and Da’wah activities, or ‘calling to Islam’, while some are registered as providing humanitarian support.

Three non-governmental organisations involved in organising Da’i lectures have received a total of KM 19,000, or some 9,500 euros, from state or local budgets in the past four years, BIRN has found.

Most of the money has been spent on Da’wah activities which seek to spread the faith.

Observers of the movement say Salafi Da’is have toned down their most radical messages but continue to preach intolerance, call into question basic human rights enshrined in Bosnian law and harbour hopes of challenging the authority of the official Islamic Community of Bosnia and Herzegovina.

They appear to be reaching a wider audience thanks to their sophisticated use of social media.

Aner Zukovic, a researcher at the Sarajevo-based Atlantic Initiative, which advocates for Bosnia’s Euro-Atlantic integration and has analysed the work of Salafi Da’is, said such organisations are “increasingly starting to engage in Islamic missionary activity, so-called Da’wah, through which is sought the toppling of the Islamic Community’s authority.”

Salafi preachers, he said, openly oppose “contemporary democratic views on issues of the order of society and the state,” Zukovic told BIRN.

“It is indicative that their work has or has had some informal political consent from politicians in the Federation,” he said, in reference to the mainly Bosniak-Croat Federation that is one of Bosnia’s two entities.

For three consecutive years, the Alternativa association for the promotion of ‘positive values’, registered in Ilidza just west of the capital Sarajevo, has received money from the local municipality – some KM 3,000 in total for 2017 and 2018 for cultural work and KM 2,000 earmarked in the 2019 budget for its “regular activities”.

Those activities are focused primarily on organising lectures several times a month in the premises of the Igman cinema, with those who attend told how to conduct their lives in accordance with Salafism.

“This is the primary activity of our association,” Adis Polovina, an Alternativa representative, told BIRN, though he said the money received from the municipality was spent on Eid events. “That project cost us considerably,” he said.

According to records given to BIRN by the Ilidza municipality, Alternativa organised 27 public discussions and Eid events and a promotional campaign “affirming universal values and patriotism and supporting social activism for the sake of benevolence towards the Bosniak people.”

The office of Ilidza mayor Senaid Memic, a member of the main Bosniak party, the Party of Democratic Action, SDA, said the mayor was not in a position to discuss the issue.

Nine of the lectures financed from the Ilidza budget were held by the most prominent Salafi Da’i in Bosnia, Elvedin Pezic, who boasts more than 180,000 followers on Facebook.

Pezic’s latest lecture was to a packed Igman cinema in early October 2019 under the title ‘Use the five life opportunities’. Pezic gave the same lecture on behalf of at least five different organisations between October and December 2019, including for the ‘Oaza’ association in the central Bosnian town of Zavidovici.

Pezic had spoken months earlier in Zavidovici at an organised Iftar – the evening meal with which Muslims end their daily fast during Ramadan – when he thanked the municipality for its support for the event.

Oaza said the mayor of Zavidovici, Hasim Mujanovic, had provided “logistical support”, including use of the venue. Mujanovic, however, told BIRN that neither he nor the municipality had participated “in any capacity”.

Mujanovic said that it would be illegal for the municipality to assist in organising an Iftar event outside of the official Islamic Community of Bosnia and Herzegovina.

Operational, despite challenge to registration

The Elif Kalesija citizens association received KM 1,000 from the municipality of Kalesija for its project “Learn, Read, Grow Stronger”, spending part of the money on a visit to the Emanet Educational Centre in Mostar where those attending met the head lecturer Dzevad Golos.

Golos was the founder of the Darul Quran Foundation in Mostar, which, among other things, was involved in “facilitating lectures and public discussions” and “teaching the Holy Quran, learning it by heart”.

The Islamic Community, shortly after the Foundation was established in 2006, requested its deletion from the Register of NGOs and Foundations at the Federation Ministry of Justice, according to documents with the ministry of Bosnia’s mainly Bosnia-Croat Federation seen by BIRN.

The head of the Islamic Community at the time, Mustafa Ceric, told BIRN he did not recall the details of the case. Golos declined to comment regarding the work of Darul Quran.

Despite the request for deletion from the registry, the Foundation organised Da’i lectures over the following seven years.

In 2012, the Islamic Community requested its closure based on a law prohibiting such religious organisations without the consent of the relevant religious community authority.

It was deleted from the registry in 2013. Soon after, the Emanet Educational Centre was founded in Mostar, doing similar kind of work as the Foundation. Golos is not named in the registry of associations as the Centre’s fonder, but he is its most frequent lecture and his video clips dominate its Facebook page. The Centre declined to comment for this story.

Tempo, which is registered as a humanitarian association, is also involved in organising Da’i lectures and has received KM 2,000 per year from the municipality of Vogosca in Sarajevo Canton over the past four years.

The office of Mayor Edin Smajic of the SDA did not respond to a request for an interview with Smajic but sent a short answer to say that all funding was spent on humanitarian purposes and was monitored by a municipality commission.

Asim Mujkic, a professor at the Faculty of Political Sciences in Sarajevo, said the state should question whether it is appropriate to fund the work of someone who challenges the freedom of others. A liberal democratic state should not restrict the work of an association, “except in cases of direct hate speech,” he said, “but the budget is a public matter.”

“What I think needs to be explored is this ideological closeness; why the mayors or other political leaders support such movements or associations?”

Tempo has organised lectures recently by Pezic and fellow Da’i Safet Kuduzovic at the Cultural and Sports Centre in Vogosca. Both men have previously declined to talk to BIRN.

Kuduzovic, one of the most prominent Salafi Da’i in Bosnia, was due to hold a lecture in Austria in June but the event was cancelled, according to media reports, because of concerns over hate speech.

Zukovic of the Atlantic Initiative said online content posted by Kuduzovic between 2011 and 2013 demonstrated a “high level of intolerance towards the Islamic Community of Bosnia and Herzegovina and contained overt anti-Semitic and anti-Sufi rhetoric.”

“He advocated extremist lifestyle rules, argued that boys should not play football, and promoted the complete obedience of women to their husbands,” he said.

Kuduzovic, like a number of other Salafi Da’i, has since toned down his rhetoric. Some have accepted integration into the Islamic Community.

But, said Zukovic, Kuduzovic “did not renounce his attacks”.“Although he no longer attacks the Islamic community openly, it seems that he and others in his environment, such as Golos, who have accepted inclusion in Islamic Community structures, view this integration process as an opportunity to change this organisation from within.”

“All others should harmonise their activities with the existing legislation,” it said.

Zukovic, however, said the proliferation of organisations involved in organising lectures by the likes of Pezic and Kuduzovic demonstrated that the “organised proselytizing” of the Salafi interpretation of Islam is “perhaps at its strongest”.

The Islamic Community, he said, must consider the success of its attempt to integrate the Salafi preachers. “And is there a need for its revision?”