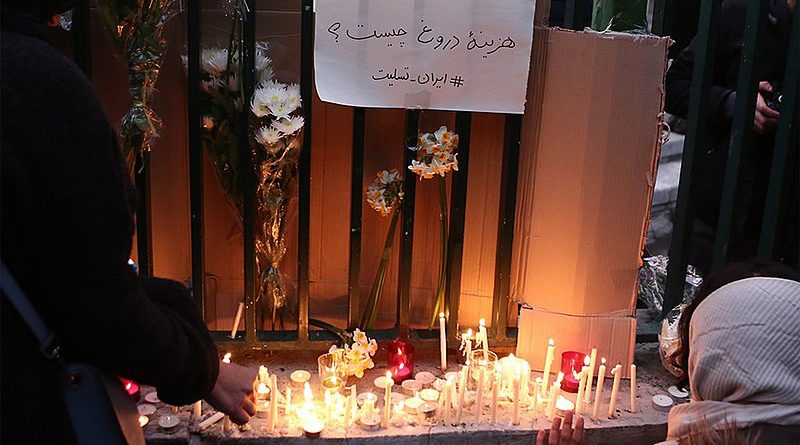 File photo of gathering and protest rally over Iran's downing of Ukraine International Airlines Flight 752. Above flowers and lit candles a notice reads "What is the cost of lying?" Photo Credit: Mohsen Abolghasem, Wikipedia Commons

The father of one of the victims of the downed Ukrainian plane called the commander of the Revolutionary Guards air force and Mohammad Javad Zarif a “criminal.” He made the remarks on the eve of the anniversary of the downing of the Ukrainian plane and at a protest gathering of families of victims.

Mourning for the victims of downed Ukrainian plane

According to reports, several families of the victims of the downed Ukrainian plane gathered in Tehran Military Court on Monday, December 14, and strongly protested lack of punishment of perpetrators of this incident.

On January 8, 2020 A passenger plane of Ukrainian International Airlines was shot down by two missiles of IRGC Air Defense System shortly after taking off from Tehran Airport. All 176 people on board died in this incident.

During a protest rally on Monday at the military courthouse of Maryam Malek’s father, one of the victims of the Ukrainian plane crash explicitly called Amir Ali Haji Zadeh, IRGC air force commander, and Mohammad Javad Zarif, the Islamic Republic’s foreign minister, “criminals” and called for the trial of those who played a role in downing of this passenger plane.

Officials of the Islamic Republic of Iran, despite the evidence and reports that showed IRGC air defense missiles hit the plane and caused it to crash, strongly denied these reports until January 11 of last year, despite being fully aware of the cause of the crash. And provided false information.

Amir Ali Haji Zadeh, commander of the IRGC Air Force, claimed responsibility for the catastrophic mistake with a three-day delay in a televised interview, saying that an IRGC air defense system official had “mistakenly identified the Ukrainian passenger plane” as a cruise missile and fired at it.

Maryam Malek’s father has criticized the officials for not allowing the families to participate in the investigation and clarification of the facts. Since they are the one who lost their loved ones and now because of their sorrow they are just like walking dead!

Criticism of handing over investigation to “criminals”

Mr. Malek also asks why during this period the IRGC Air Force Commander who has “direct military responsibility” was not fired?

Maryam Malek’s father said in the Tehran Military Court: “Our demand is the military prosecutor to remove all those responsible; “from the head of Civil Aviation Authority, the IRGC commander of Air force, the commander of IRGC [Hussein Salami], and everyone, especially the criminal who is Minister of Foreign Affairs [Mohammad Javad Zarif].”

A year of living in the darkness

“I will open my chest and beg you to order me to be arrested here, to be executed here,” he added. “I do not want to live after my child, I do not want anything. We are all dead, none of us want to live. It’s been almost a year now and we only have been living in the darkness.”

Mr. Malek accused the officials of the Islamic Republic of cover up and secrecy, he added: “In our opinion, all this is a play.” Criticizing the negligence of the authorities in protecting the belongings of the victims, he told the judge of the Disciplinary Court: “Mr. Judge, tell me what you did to looters of belongings of our children?”

Destruction of the remaining mobile phones of victims

He also accused local police and police officers of “smashing” and destroying the mobile phones left by the victims in their possession, and asked, “Where is the memory of our children?”

Officials of the Islamic Republic, who for months refused to provide the black boxes of the downed passenger plane of Tehran-Kiev flight, after more than 11 months still refuse to publish the full details of the incident and deal with officials responsible for firing IRGC missiles.

It was recently announced that the government intends to allocate 200 million euros in the next year budget from the National Development Fund to compensate the Ukrainian airline and families for the downing of the plane.

The announcement of the budget for compensation sparked a lot of discussion inside Iran, and Ukraine’s Deputy Foreign Minister Yevgeny Yenin announced in a radio interview last week that Iran has withdrawn its compensation offer.

Many families of Ukraine International Flight 572 have repeatedly said that it is more important for them to clarify the details of how the plane was targeted and to identify and punish those responsible for the disaster than to receive compensation.