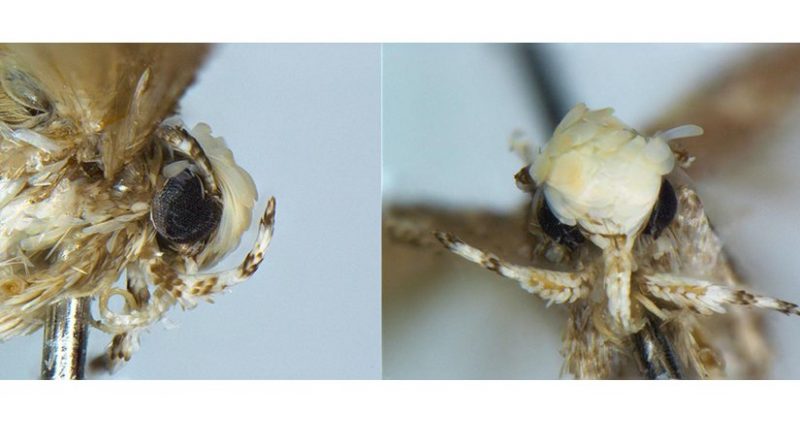 This is a close up of the head of the holotype of the new species Neopalpa donaldtrumpi Credit: Dr. Vazrick Nazari

Days before Donald J. Trump steps forward on the Inaugural platform in Washington to assume the role of the 45th President of the United States of America, evolutionary biologist and systematist Dr. Vazrick Nazari named a new species in his honor.

The author, whose publication can be found in the open access journal ZooKeys, hopes that the fame around the new moth will successfully point to the critical need for further conservation efforts for fragile areas such as the habitat of the new species.

While going through material borrowed from the Bohart Museum of Entomology, University of California, Davis, Dr. Vazrick Nazari stumbled across a few specimens that did not match any previously known species. Following thorough analysis of these moths, as well as material from other institutions, the scientist confirmed he had discovered the second species of a genus of twirler moths.

While both species in the genus share a habitat, stretching across the states of California, USA, and Baja California, Mexico, one can easily tell them apart. The new moth, officially described as Neopalpa donaldtrumpi, stands out with yellowish-white scales present on the head in adults. In fact, it was in these scales that the author found an amusing reference to Mr. Trump’s hairstyle and turned it into an additional justification for its name.

Donald Trump’s flying namesake is announced only a month following the recently described species of basslet named after predecessor President Barack Obama, also published in ZooKeys. The fish is only known from coral reefs in the Papahānaumokuākea Marine National Monument, NorthwesternHawaii, a nature reserve which the 44th President of the United States of America expanded to become the largest protected marine area in the world.

Being a substantially urbanized and populated area, the habitat of N. donaldtrumpi is also under serious threat.

“The discovery of this distinct micro-moth in the densely populated and otherwise zoologically well-studied southern California underscores the importance of conservation of the fragile habitats that still contain undescribed and threatened species, and highlights the paucity of interest in species-level taxonomy of smaller faunal elements in North America,” says discoverer Dr. Vazrick Nazari. “By naming this species after the 45th President of the United States, I hope to bring some public attention to, and interest in, the importance of alpha-taxonomy in better understanding the neglected micro-fauna component of the North American biodiversity.”