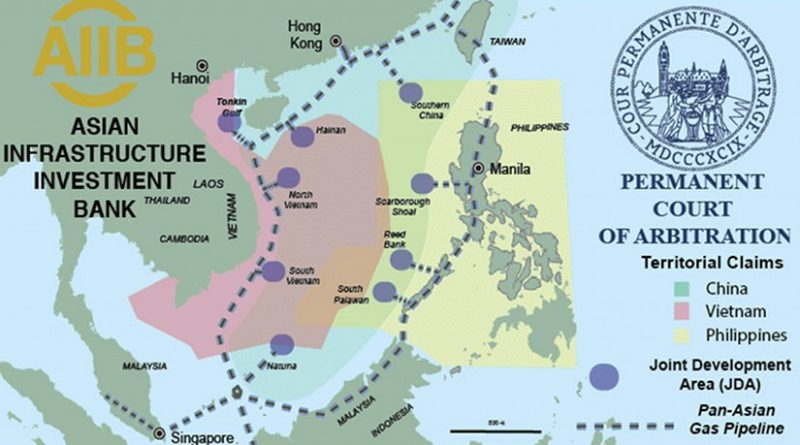 The Philippines has appealed to The Hague based UN Court of Arbitration over China’s territorial claim to nearly the entire South China Sea. The tribunal could issue a ruling as early as May. Source: Grenatec

China says it won’t accept any South China Sea UN Tribunal decision it doesn’t like. But an adverse decision could lead to a climb down with Chinese characteristics.

Why? Because the success of China’s newly-opened Asian Infrastructure Investment Bank (AIIB) could hinge upon it. That’s a higher Chinese political priority — at least over the short- to medium term.

The AIIB is China’s first foray into big time global economic diplomacy. Its success hinges upon the confidence of borrowers.

That confidence will revolve around borrowers’ estimations of Chinese intentions.

As early as May, a UN Tribunal may rule on the merits of China’s ‘Nine Dotted Line” territorial claim to virtually the entire South China Sea.

That’s about the same time the AIIB aims to announce its first loan.

For China, this creates both crisis and opportunity.

Should China reject UN tribunal arbitration in the South China Sea, saying it won’t be bound by international proceedings it doesn’t win, a ‘blow back’ precedent could be set for AIIB borrowers.

These borrowers, taking a page from China’s playbook, could in turn renege on AIIB terms they don’t like — uniliaterally asserting the terms discretionary and rejecting dispute resolution, citing Chinese precedent.

For decades, China’s been a large-scale recipient of inward investment. Now, China is becoming an exporter of capital. This changes everything, as China is rapidly learning.

As China transitions from receiving inward investment to investing overseas, look for Chinese behavior to change.

This process will take several years. During that time, China’s quite vulnerable should borrowers pick up some of China’s economic precedent-setting bad habits.

Last year, the Philippines expelled Chinese grid technicians due to unsupported Philippine claims a computer virus had been planted on the grid.

China’s response was muted, calling only for ‘procedural fairness.’ That’s a far cry from China’s assertion that only South China Sea UN arbitration decisions that go its way will be acceptable.

As China becomes an external investor, it will progressively view international rules not as plots to ‘humiliate,’ ‘isolate’ and ‘weaken’ China, but as critical, confidence-inducing cogs enhancing the smooth operation of international commerce.

This mattered little during the decades between 1980-2010 when China received inward investment and local caprice risk was borne exclusively by international counterparties.

Now that China’s the counterparty, look for China to take more principled stands on legal predictability.

With huge and growing internal economic imbalances, a slowing domestic economy and risk of politically-destabilizing rising unemployment — China now desperately needs a export relief valve. Foreign investment is the valve. The AIIB is the mechanism. .

Done right, this will work for everyone. China gets a better return on its deadweight, multi-trillion hoard of US dollars. These returns can fund the rising domestic fiscal outlays an aging Chinese population will require. Other countries, meanwhile, will get new infrastructure.

The place to start — serendipitously — is with Vietnam and the Philippines. Both have deep need of new infrastructure. Both already are recipients of beneficial Chinese investment.

But both are also at the sharp end of Chinese expansionism in the Paracel and Spratly islands.

The good news is that China has more to lose by stridency in the South China Sea than it has to gain by pushing ambit claims over the entire area.

As 2016 wears on, look for a moderation of China’s positions.

The biggest of these would be on the subject of Joint Development Areas. China, Vietnam and the Philippines all have expressed support in principle for the idea.

The general concept also is favored by Taiwan, Indonesia and Malaysia.

The AIIB, as a new multilateral lending institution, can play a big role in solving several problems at once.

By lending money in Southeast Asia to create infrastructure to serve Joint Development Areas in the South China Sea –– a catalytic virtuous circle of cooperation, trust and economic integration can get under way.

The Philippines and Vietnam get large-scale energy investments they would have a hard time making on their own. For China, the big contracts could flow to her industrial champions State Grid Corp. of China and CNOOC.

Meanwhile, the increasingly febrile temperature in the South China Sea gets cooled off as China gets a ‘social license’ in the sea, neighboring countries get investment and everyone benefits from economic integration.

Look for moves along these lines later this year.

Source: This article was published by Grenatec