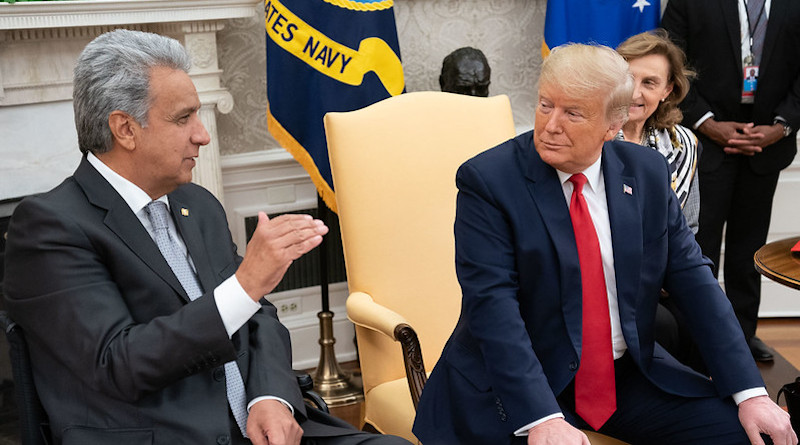 The US impeachment ordeal has left American political culture worse off on balance. It has had the concomitant effect of deepening and accelerating the inward turn of US foreign and national security policy.

It is no big revelation that the churning dysfunctions of American politics are bound to affect American foreign and national security policies, and with them the rest of the world in one way or another. This is because the United States is no ordinary country. It is big, wealthy, powerful, and attention-arresting as a model of public life ─ whether on account of its core principles of Enlightenment-born liberalism, its tendency to anti-hierarchical egalitarianism, its secularism-nested multiculturalist reality, or all of the above as a package deal.

These characteristics are irrepressible ideological lightning rods, taken separately or especially together. They strike some as aspirational, others as mortal threats. No one, however, knows how to ignore them.

The Great Drama of Trump’s Impeachment

America’s imprimatur on the current global order has been second to none since the end of World War II. It has not only affected nearly every aspect of global security, but it has shaped the global commercial/trading system and influenced deeply, for better and probably also otherwise, the world’s emerging globe-spanning cultural mélange. If American influence essentially collapses because of domestic political crisis and others fill the vacuum, all these shapes will change, sooner than later.

The great drama of Donald Trump’s impeachment by the Democratic-controlled House of Representatives and his summary acquittal by the Republican-controlled Senate affects all of this, both by way of prospective policy and by means of images and optics. It’s not the only causal factor pressing on US policies, and how significant an inflection point it turns out to be in its own right is for the fickle future to determine. Even so, several broad implications can already be proffered.

Nearly everyone involved in the impeachment affair and its many political outcroppings ─ the Republican and Democratic Parties, the mainstream media, the FBI, the Justice Department, and one could go on ─ has behaved badly. In some cases, very badly. The harm done to the health of American political culture is likely severe, and may not be fully recoverable.

Acquittal has defined presidential deviancy down, harmed the structure of the separation of powers, and made a mockery of the rule of law. The problem has been metastazing for years, even before Donald Trump’s election as president, but the impeachment debacle lays the dysfunction bare and likely accelerates it, as a dam breaking before a storm surge invites the deluge.

The Impaling of American Soft Power

The US brand, its “soft power” with it, has now been impaled for all to see on the boundless egos of a demagogic pretender and his spineless sycophants. To the extent that America was ever, as Abraham Lincoln said, “the last best hope for mankind” or, as Governor John Winthrop famously put it, “a city on a hill”, the hope is fading as the lights in the city go out one by one.

But that does not exhaust the implications for the world at large. Above all, the head-in-the-sand inward turn of America, away from the wider world and the responsibilities its power ordains, will now accelerate. Splenetic politics is so completely enveloping everything it touches that actual policy issues and choices no longer even rate mention.

All higher-level policy formulation will likely cease or become sporadic and even less deliberate in their formulation; only political signalling using foreign policy issues as props looks to remain. Ongoing policy implementation, mostly at lower levels, is on autopilot whenever the White House avoids tampering with it. It loses energy daily without rational direction from above.

Case in point: The Ukraine aid holdup affair and the infamous July 25 Trump – Zelensky phone call. No member of the political class, or the Fourth Estate, even bothers to ask whether the policy of supplying lethal aid to Ukraine is actually a good idea.

Worse, no one ventures a public thought about what it would take for American diplomacy to actually help fix the problems that caused the Russo-Ukrainian mini-war in the first place. Gone are the days when Henry Kissinger and the late Zbigniew Brzezinski both warned against pursuing the policy currently in place and offered constructive suggestions for a deeper resolution.

Another case in point: The so-called Middle East peace “deal of the century” was promulgated entirely for reasons of politics ─ Trump’s politics of diversion and pandering, and by extension Benjamin Netanyahu’s politics of desperation.

Not only is the plan a non-starter for any practical purpose, it erodes past partial Israeli-Palestinian understandings in escrow, jeopardises Israeli-Palestinian Authority security cooperation, encourages irretrievably harmful Israeli overextension (read: annexation of the Jordan Valley, and maybe more), jeopardises the Hashemite Kingdom and the Israel-Jordan peace treaty, and reduces Arab normalisation energies with regard to Israel. No one involved in this toxic abortion seems to care, even assuming they understand any of damage its promulgation may do.

Another case in point: Former Senator Sam Brownback, now in charge of the Trump Administration’s Religious Freedom Alliance (RFA), met with the Taiwanese vice-president elect William Lai on 5 February in Washington. That made him the highest-ranking Taiwanese official to visit in more than four decades. China’s response? A PLAAF run at Taiwan’s air-defence perimeter, causing the Taiwanese air force to scramble jet fighters.

Were it not for the coronavirus crisis, the Chinese government no doubt would have played this into a major crisis in expectation of the US side backing down. As it turned out, so acute is Trump’s attention deficit and risk-aversion in security issues that Beijing did not even need to do that. The State Department’s response to the jet feint? To exclude Taiwan from the RFA, in which it had been a planning partner from the start.

Obviously, as this example illustrates, the Interagency-White House process nexus is in tatters. As a result, neither friend nor foe can tell anymore whether US policy is coming or going, or whether it actually exists at all. This isn’t an entirely new condition, but the impeachment debacle as fevered introduction to a presidential election season has made it worse and so newly dangerous.

For many who sincerely care about human freedom, human rights, human dignity and mutual toleration, and the basic decency and integrity of political life, this is not good news. In the absence of American power, resolve, and, yes, even its example up on that hill, hyenas will ramble, and the wild dogs will sooner or later find their prey.

So it is over? Whatever its past shortcomings, is America really over as the world’s beacon of liberty, protector of virtue, guardian of the weak? Is there no way back? No one knows. But we do know that with the recent impeachment proceedings resting in the archives, the worst of the peril is yet to come, for Americans and not only Americans.

*Adam Garfinkle is a Distinguished Visiting Fellow at the S. Rajaratnam School of International Studies (RSIS), Nanyang Technological University (NTU), Singapore. He is Founding Editor of The American Interest and a former US State Department official.