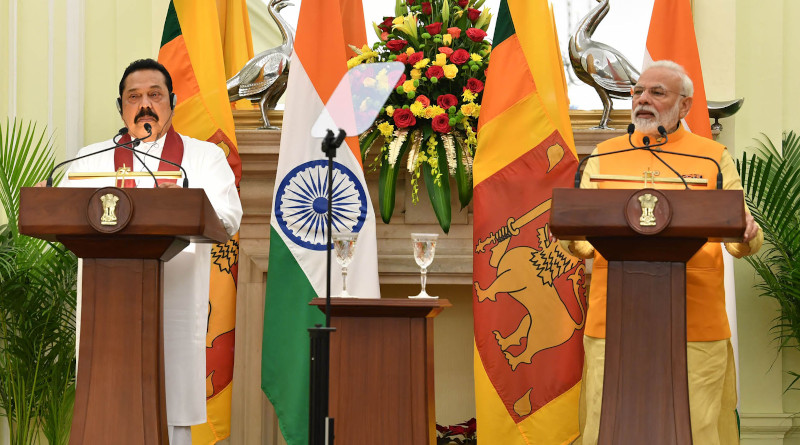 Between 7 and 11 February, Sri Lanka’s new Prime Minister, Mahinda Rajapaksa (MR), travelled to India on his maiden foreign visit since assuming office. This visit marked the fifth high-profile bilateral exchange since his brother, Gotabaya Rajapaksa (GR), was elected as the country’s president in November 2019. MR’s visit is significant not only in terms of the recent frequency of such exchanges but also vis-à-vis charting the progression of ties between the two Indian Ocean littoral neighbours. Since the beginning of the Rajapaksa presidency in November 2019, India and Sri Lanka have forged a new partnership not only by casting aside contentious issues of the previous (Mahinda) Rajapaksa presidential years, but also by focusing on new avenues of partnership that are also politically palatable to their respective domestic audiences.

India’s External Affairs Minister, S Jaishankar, who visited Colombo a day after GR’s inauguration, can be credited with taking the initiative to iron out creases. Among other things, GR’s subsequent New Delhi visit entailed a US$ 450 million line of credit from India, which included a US$ 50 million for strengthening the Sri Lanka’s security apparatus (including counter-terrorism). Subsequent bilateral engagements, such as Sri Lanka’s Foreign Minister, Dinesh Gunawardena’s, India visit, following which India’s National Security Adviser, Ajit Doval, visited Colombo, were more on the lines of taking forward that which was agreed upon during GR’s New Delhi visit.

Emerging Equation
While MR was keen on furthering cooperation on the security front (especially counter-terrorism), he was equally eager to convince India to agree to a three-year moratorium on repayment of outstanding dues. Both aspects are of significance in terms of Sri Lankan domestic politics, given how crucial parliamentary polls are scheduled to take place later in 2020.

Engagement on counter-terrorism is now a new avenue for cooperation for both sides, for it was the Rajapaksa combine (with Mahinda as president and Gotabaya as defence secretary) that had led the charge in crushing the Liberation Tigers of Tamil Eelam (LTTE)—the terrorist variant manifestation of Sri Lanka’s multi-decade long ethnic discord. However, the April 2019 Easter day terrorist attack in Colombo, the first such incident after a decade of peace, rekindled memories of the country’s LTTE past, and has become part of the national political discourse since.

For Sri Lanka’s incumbent administration, the moratorium on debt repayment is not only a near term measure to kick-start economic revitalisation but also a potential bargaining chip with other creditors, like China. Moreover, it was not only the Rajapaksas’ ‘strong man’ image on security but also the promise of reviving the economy that had helped them sweep the 2019 presidential race.

The “Tamil Question”
Post his meeting with his Sri Lankan counterpart, India’s Prime Minister, Narendra Modi, expressed confidence in the Sri Lankan state’s ability to revisit the ethnic question with an open mind under a united Sri Lanka. This not only reflects New Delhi’s eagerness to express its concerns on the “Tamil question” but also to reiterate that the ethnic question was not synonymous with security/counter-terrorism cooperation. India’s raising of this issue at this juncture is significant, given how the “Tamil question” had been placed in cold storage during high-level exchanges in the recent past, including those with the Rajapasksas’ predecessors.

While nudging Sri Lanka to approach political reconciliation with an open mind, Modi has also underscored that the upcoming Sri Lankan parliamentary election should not become a platform for chest thumping on ethnic lines, and instead aid the post-poll polity to pave the way for ethnic reconciliation. On cue, or to placate conservatives back home, MR went on record that the ethnic issue would be addressed post polls by engaging the duly elected representatives of Sri Lanka’s Tamil populace.

Looking Ahead
Indian involvement on the “Tamil question” arises not merely due to geographical proximity but also due to shared ethno-linguist linkages in India. For decades, the Indian state of Tamil Nadu has highlighted the plight of Sri Lankan Tamils. While past engagement between New Delhi and Colombo typically faced vociferous opposition from Tamil Nadu, this time around, the state’s reception to multiple high-level exchanges of the past few months has been considerably muted. In the context of the current nature of bilateral ties, Tamil Nadu’s reaction is not that of a spectator by default but a reflection of the general political discourse in the state. Owing to the nature and development of internal political issues of the past few months, in Tamil Nadu, the political prerogative of the state has moved away from Sri Lanka for the time being. In this context, Tamil Nadu is already drifting into an election mode, even though state assembly polls are due only in 2021.

In this backdrop, by asking his counterpart to engage in dialogue with Sri Lanka’s Tamil community with an ‘open mind’, Modi not only expressed India’s desire for a sustainable resolution of the ethnic question in Sri Lanka but also sent out a polite reminder on the limited window of opportunity available to the Rajapaksa brothers to reach a domestically evolved political solution to the ethnic question—which was an unfinished project of their previous administration.

Hit by COVID 19, India is  in  the dichotomy of overdependence on imports for its emerging industries, which are import

What Difference Between India’s Approach Now And Then To India? – OpEd