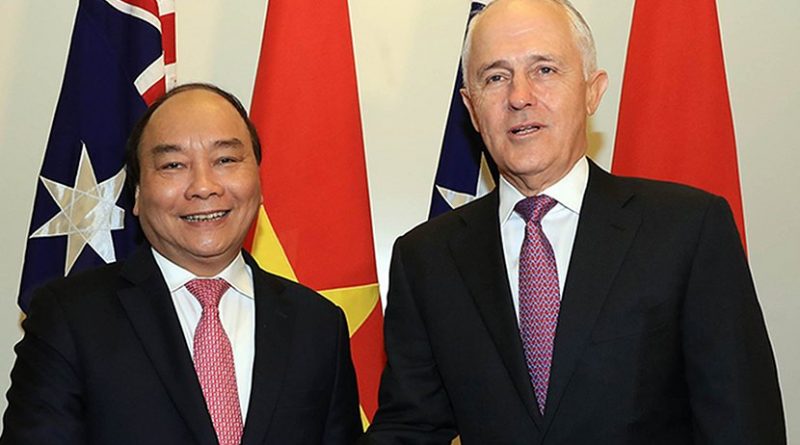 Of the 10-member ASEAN bloc, Vietnam has emerged as the main pivot in the organisation’s foreign diplomacy. Fit now to be compared as a middle power, Vietnam’s emergence as a fast growing economy and its diplomatic outreach in tune with the prevailing geopolitical setting is relevant to prevailing geopolitical settings. After burying the bitter past, its relations with the United States has become robust. Its relations with India with civilizational links have already reached escalating heights.

Vietnam has found great sense of commonality with Japan. Changing geopolitical situations in the Indo-Pacific has drawn Vietnam, India and Japan closer to work together for peace and stability in the region. The unilateral approach on certain Asian power on some regional issues of critical importance is worrying for other stakeholders, which is why Vietnam, Japan and India view the changing situation in the same prism.

Against this background, the significance of the visit of Vietnamese Prime Minister Nguyen Xuan Phuc to New Zealand and Australia needs to be understood. Besides strong ties at bilateral levels between these countries with each other, there are other regional and global issues which compel them to work from a common platform. India-Japan relations are no less significant than India-Australia relations. Similarly, Vietnam-Australia relations are no less significant than Japan-Australia’s relations. The United States provides the common thread to this triangular relationship. Vietnam is equally too important to be left out from this informal grouping. It is in this perspective Prime Minister Phuc’s visit to the two Oceania nations assumes significance.

In the sequence of visit, Phuc first travelled to New Zealand from 11 to 13 March. This paved the way to create a driving force for the enhancement of the countries’ comprehensive partnership and the expansion of cooperation in the future. As observed by Vietnamese Ambassador to New Zealand Nguyen Viet Dung, Phuc’s visit was meant to affirm Vietnam’s consistent foreign policy of independence, autonomy and multilateralisation of foreign policy, including those with New Zealand. It was also an occasion for the two sides to strengthen political trust and create a solid foundation to intensify bilateral cooperation based on the Vietnam-New Zealand Action Plan for 2017-2020 signed in November 2017 when New Zealand Prime Minister Jacinda Ardern attended the APEC summit in Da Nang.

There is a great deal of political understanding since the establishment of diplomatic relations between the two countries in 1975 and the comprehensive partnership in 2009. Regular mutual visits of top political leaders have helped hone ties in various sectors and issues. There is also perceptible uptrend in trade and economic ties. Phuc’s visit provided further boost following his address to a business forum attended by a number of big enterprises.

Vietnam is currently the 16th biggest trade partner of New Zealand. Bilateral trade witnessed a growth of 15 to 20 per cent over the past five years. Bilateral trade between the two in 2017 surged by nearly 30 per cent from the previous year and reached $1.2 billion. Given the current trend, the targeted trade in goods and services of $1.7 billion in 2020 seems completely achievable.

Both the countries are members of ASEAN-Australia-New Zealand Free Trade Agreement, which took effect in January 2010. Also, the Comprehensive and Progressive Agreement for Trans-Pacific Partnership (CPTTP) was signed in Chile on March 8. Both, along with nine other of the Asean bloc and five partner countries of ASEAN are also taking part in the negotiation on the Regional Comprehensive Economic Partnership (RCEP).

Both are also making strides in the education sector. More than 2,200 Vietnamese students are studying in New Zealand at present. The signing of some educational cooperation documents such as a strategic cooperation plan for 2018-2020 and some agreements between Universities, with the aim of increasing the number of Vietnamese students in New Zealand by 30 per cent by 2020 was the other highlight of Phuc’s visit.

New Zealand’s specialisation on diary and agricultural products is the envy of the world. Despite a heavily protected industry, agriculture has emerged as an important contributor to trade and investment relations between the two. Like Japan which imported foreign technologies after the War and indigenised to emerge as the second largest economy in the world before it lost the slot to China, Vietnam has benefitted from New Zealand’s help to develop value chains in agricultural production and built the capacity of small- and medium-sized enterprises. Even earlier, Vietnam benefitted from India on rice cultivation and now emerged as a major rice exporting country. Mango, for example, which went from India, is available in Vietnam throughout the year, whereas in India it remains only seasonal.

Tourism is another sector where both the countries can have mutual gains. Both the countries are blessed with plentiful attractive locations and if the aviation sector is strengthened, it would give a boost to tourism. Vietnamese tourists to New Zealand rose by 32 per cent in 2016. New Zealand even fared better as the number of New Zealand visitors to Vietnam soared by 41 per cent because of Air New Zealand’s opening of seasonal direct flights from Auckland to Ho Chi Minh City in 2016. There is immense scope to scale up bilateral ties in all fronts and reach new milestones in each field listed in the Action Plan for 2017-2020. Phuc’s visit shall provide the political push and impetus to help realise these goals. Both sides need to strive hard to optimise the advantages brought by the free trade agreements. If Vietnam is able to make proper use of the trade deals, it would facilitate trade, help meet targets for each group of commodities, especially agricultural products so that it can break barriers to access the highly protected New Zealand market.

This apart, Phuc’s visit is a testimony to the commitment for both nations to work together towards peace, stability, development and prosperity in Asia-Pacific region and the world.

When Phuc was on the second leg of his Oceanic trip and reached Australia for a two day 14-15 March trip, similar bonhomie was seen between the political leaders of both the countries. Like with New Zealand, Vietnam has cordial relations with Australia. Having established diplomatic ties in 1973 after negotiations were concluded in Paris that resulted in an Agreement to End the War and Restore the Peace in Vietnam, they now celebrate the 45th anniversary of the official relationship.

In this long journey, there have been two major turning points in Vietnam-Australia relationships: the first in 2009 when Nong Duc Manh, Secretary General of the Vietnam Communist Party visited Canberra and subsequent signing of a joint statement between Deputy Prime Ministers Julia Gillard and Pham Gia Khiem raising bilateral relations to a comprehensive partnership; and second, in March 2015 when Vietnamese Prime Minister Nguyen Tan Dung visited Canberra. Though the ground was laid during this time for establishing a strategic partnership in the future, the significance was less noticed then.

While the joint statement premised the partnership to be based on six major areas of mutual cooperation – political and public policy exchanges, economic and trade relations, development assistance and technical cooperation, defence and security, people-to-people links, and global and regional issues – to be implemented through a three-year Plan of Action (2010-13), Dung’s 2015 visit paved way for the signing of the Declaration on Enhancing the Australia-Vietnam Comprehensive Partnership. This declaration identified five major areas of cooperation: deepening bilateral ties, regional and international, economic growth, trade and industry development, development assistance, defence, law enforcement and security ties.

Political and economic areas would remain underutilised unless human capital is enriched. With this in mind, Phuc signed an educational cooperation agreement with Australia to create a knowledge pool that would be in sync with each other’s need and requirement. Australia is a major attractive destination for students. There are around 30,000 Vietnamese students studying in Australia, the highest number of foreign students in a foreign country, demonstrating the trust Vietnamese parents and students repose on Australian academic institutions. The fact that over 60,000 Vietnamese graduates from Australian education facilities returned home to serve the nation demonstrates not only to the quality of education they receive in Australia but also the commitments of the students to serve their nation.

The enhanced comprehensive partnership demonstrated that there is a growing convergence of interests and outlook between them. Both are committed to maintain regional security, stability and economic development based on respect for sovereignty and international law. Both give equal importance to multilateral institutions such as the ASEAN, APEC and the EAS.

On the economic domain, both nations are committed to long-term global and regional economic integration based on trade and investment liberalisation. When President Donald Trump withdrew from the TPP, both nations participated in successful negotiations for a Comprehensive and Progressive Agreement for TPP-11.

As noted in the beginning of this article, it is significant to note the understanding between India, Japan, Vietnam and Australia in the political and security fields that has emerged. While Vietnam-Australia comprehensive partnership were becoming robust day by day, Vietnam-India strategic partnership was elevated to special status during Prime Minister Narendra Modi’s visit to Hanoi in September 2016. Currently, Vietnam has eleven strategic partnerships, including four of the five members of the UN Security Council, India and Japan. Given the commonality of interests on a host of bilateral, regional and global issues, it was no wonder that bilateral ties were elevated from comprehensive to a strategic level during Phuc’s visit. The four nations mentioned bonding together with common viewpoints on regional security and strategic issues and coordinating policy choices would contribute to the peace and stability of the region. Phuc’s visit to New Zealand and Australia needs to be seen from this broader perspective.

What is at stake is peaceful settlement of regional disputes, commitment to abjure the use of force, respect for international law including the 1982 UN Convention on the Law of the Sea as certain power is determined to disrespect rules governing global trade. It is therefore other law-abiding nations have to come together to address to this common challenge, including that of maritime security. Phuc’s Australia visit needs to be seen as enforcing such critical issues confronting not any single nation but the region as a whole. Related to this, maritime cooperation to maintain order in sea is also every nation’s responsibility. Raising the present level of relations between Vietnam and Australia to a new level would be the major outcome of Phuc’s visit to Australia and could be the third turning point in bilateral ties.

*Dr. Panda is ICCR India Chair Visiting Professor at Reitaku University, JAPAN. Views expressed are personal and do not represent either of the ICCR or the Government of India.