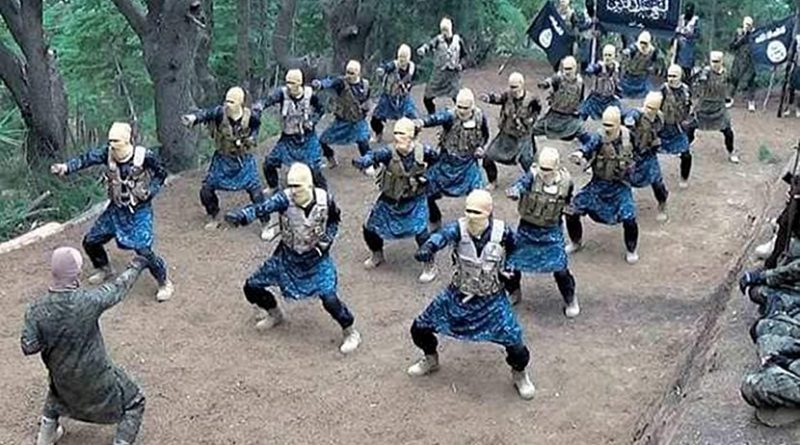 There are certain discrepancies that are openly visible between the threat perceptions of ISIS, the central group, and its supposed wilayat in Afghanistan.

The signing of a “peace” agreement between the US and the Taliban on 29 February in Doha, Qatar, sped up the process of a return to the mainstream for the Taliban insurgency who were ousted from power in 2001 in the wake of Washington’s war against terror.

However, in 2020, the Taliban standing on a higher negotiating ground arguably has a strong grasp of narratives on multiple fronts compared to the US and its allies who have been fighting the group for more than 19 years. In midst of America’s ‘endless war’ in Afghanistan, the rise of the so–called Islamic State (ISIS) or Daesh in Iraq and Syria added a new dimension to global jihadist movements. ISIS had a history with Afghanistan, with the group’s ideologue and former chief of Al Qaeda in Iraq, Abu Musa al–Zarqawi, running training camps in southern Afghanistan and pledging his allegiance to Al Qaeda’s chief Osama Bin Laden in 2004.

Since the signing of the Doha deal, there is great clarity to the fact that the US wants an exit from Afghanistan and is ready to compromise on issues that would have earlier been non–negotiable. In the days following the deal, the chief of US Central Command Gen. Frank McKenzie has said that beyond just the agreement, the US is also providing “very limited support” to the Taliban in the insurgents’ efforts to counter the Islamic State Khorasan (IS–K), the supposed wilayat of ISIS in Afghanistan.

Gen. McKenzie’s disclosure, while startling, was a musing that the Trump administration had mentioned before as part of their strategy to ease the Taliban into accepting a chunk of their terms and conditions along with creating a more palatable narrative for the American domestic discourse. Gen. Austin S. Miller, the commander of US and NATO military operations in Afghanistan in March last year appraised the Taliban about the mutual requirement between the two to take on ISIS. “We could keep fighting, keep killing each other. Or, together, we could kill ISIS,” he reportedly had told the Taliban negotiators. Interestingly, the text finally signed between the US and Taliban mentions IS–K nowhere, and even Al Qaeda, is almost mentioned in passing allowing leverage to remain on the Taliban side.

However, there are certain discrepancies that are openly visible between the threat perceptions of ISIS, the central group, and its supposed wilayat in Afghanistan which today seems much more powerful and funded than the core, which has territorially diminished and hierarchically remains uncertain after the death of its leader Abu Bakr al–Baghdadi in October last year. In fact, the rise of IS–K arguably had little to do with the ideology of ISIS and more with the internal battles within the Taliban. Scholar Antonio Giustozzi says that such intra–jihadist turmoil in Afghanistan and within the Taliban is not uncommon with two main reasons being internal power struggles and sharing and distribution of spoils (money, land, fighters). The supposed ‘founder’ of IS–K was also a former disgruntled Taliban leader, Mullah Abdul Rauf, who switched sides in 2014 along with some Pakistani and Afghan fighters.

The fact that IS–K quickly developed a knack of conducting large attacks in Kabul, a stronghold of Taliban’s operations, showed that the ‘new’ group was in fact not a completely new presence. Between 2014–2018, Kabul stood as the second most targeted place for IS–K after its territorial stronghold of Nangarhar province with the capital witnessing a total of 52 attacks claimed by the group, out of which 38 were suicide attacks, killing 744 people and wounding 2092. The importance of gaining the capability of attacking Kabul is shown in a comparison to the attacks IS–K conducted in Nangarhar, which in the same time scale conducted 119 attacks in the province, more than double that of Kabul, killing 437 people, nearly half of the damage made in the Afghan capital.

A recent study by the Afghanistan Institute of Strategic Studies (AISS) adds extra light on the chimera like composition of IS–K, which has everyone from the Taliban to the Tehrik–i–Taliban Pakistan (TTP), the Haqqani network, Pakistan’s ISI, members of the Islamic Movement of Uzbekistan (IMU) and other more fragmented and localised groups and commanders playing up the various heads of the IS–K depending on the location. The AISS report perhaps correctly highlights that it is in fact geopolitics, and not ideology that directs IS–K’s obligations and operations. The report also highlights an important facet of the group’s formation, that of internal disagreements between the various Shuras of the Taliban. The Peshawar Shura and the Miran Shah Shura (also known as the Haqqani network) regarded IS–K as a legitimate jihadist group, while the Quetta Shura (arguably the most powerful one) approached the group with great suspicion. All these frictions amongst the Shuras happened, all three based in Pakistan, a few months after the Taliban opened the Doha office in June of 2013 and the inevitability of a direct US–Taliban was established.

The future trajectory of IS–K will be interesting to predict, with the possibility of a more geopolitically inclined leadership of the group backed by a more ideologically inclined fighting work force behind it. Even if backed by Pakistan as part of Rawalpindi’s efforts to keep some groups operational in Afghanistan under its thumb, for primarily geopolitical but also theological reasons, a hotpot of so many interests, both state and non–state, the possibility of such a group having an outreach in South Asia with a powerful jihadist brand that of the Islamic State will ultimately prove to be a bogey for power struggles being played out within Afghanistan itself, which if not IS–K today, will come up under another name tomorrow.

IS–K’s major victories came parallel with the successful branding of ISIS in the Middle East. However, it is perhaps arguable that its mandate today has changed significantly to what it was around 2014–2015 which is also when, as per accounts, Pakistan started to drive a wedge in the IS–K top structures by offering weapons and money, causing dissent within against those who sided with Pakistan those attempting to remain true to the mandate of the Islamic State.

The US trying to prop the Taliban against IS–K is a myopic policy, which will not only end up being detrimental mostly to the Afghan people but add another puncture to South Asian security. A sale of the idea of Taliban as a counter to IS–K bolsters Pakistan’s game in the region, where it may end up with having sway within the IS–K ecosystems, pitching leaders and commanders loyal to them against others, along with having significant pull in Afghan Taliban’s matters, ending up getting the best of both the jihadist worlds. This ecosystem will end up having a detrimental effect on India’s interests, knowing that New Delhi relies on US’s security cover in the country to further its own agendas, and that this free–ride is now coming to an end. Whether the Taliban takes on the IS–K or not, Pakistan and its terror ecosystems will most likely walk away as the winner.