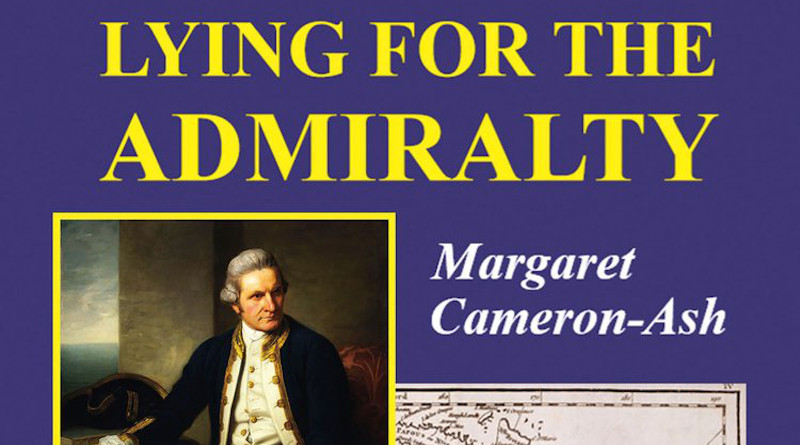 With all the recent publications on Captain James Cook, this important book has flown under the radar. That’s a pity because, in terms of fully understanding the history of the European discovery of Australia, “Lying for the Admiralty” adds a vital piece of the jigsaw puzzle that has long been missing. And you don’t have to be a former intelligence officer to appreciate why, though that certainly helps.

Why this is so, is because intelligence officers understand that not all of what we call “history” streams across the surface where it is eventually recorded for the annals, lodged in our National Archives or meticulously examined by PhD students at some later date. Certain secret matters go unwritten, which means that centuries later only the most assiduous forensic investigation, coupled with impressive powers of deduction, can provide a picture of what really happened. And that is what Margaret Cameron-Ash, a lawyer, a former visiting fellow at the University of NSW and author of numerous papers on Captain Cook, has achieved.

As Cameron-Ash clearly and elegantly recounts, the Endeavour voyage didn’t occur in a vacuum: it was the fifth European voyage to the South Seas in as many years. These expeditions took place in the early years of the Anglo-French cold war between 1763 and 1776, between France’s humiliating defeat in the Seven Years War and its opportunity to revenge itself upon Britain by supporting the American colonists in their War of Independence. Some Frenchmen couldn’t wait that long. Deploring the loss of France’s empire in the northern hemisphere, Louis de Bougainville hoped to build a new one in the southern hemisphere. He secretly led a group of Canadian refugees to build a French colony in the Falkland Islands, which guard the entrance to the Strait of Magellan and the Pacific. The South Seas became the new theatre of European rivalry.

Setting Cook’s voyage in its wider context enables a deeper understanding of the motivations of both Cook and the British Admiralty. And in broadening the angle, there’s scope to discover or re-visit lesser-known or even forgotten events, characters and conflicts – the fact that Cook wasn’t the first person chosen to command the Endeavour, the fate of Joseph Banks’s hunting dogs, and the menacing role played by the East India Company.

Cameron-Ash brings to life the character of formerly shadowy figures such as Phillip Stephens, Secretary of the Admiralty for thirty-two years, de facto chief of the Secret Service and architect of empire. Stephens knew that Cook would make strategic discoveries in the Pacific that were too valuable to publicise. These included new sea lanes, shortcuts, offshore islands and deep harbours. All of these were vital for wartime battle and peacetime trade.

James Cook was politically astute and needed no instruction about the strategic vulnerability of offshore islands. He had spent five summers charting the coast of Newfoundland after the French were given the nearby islands of St. Pierre and Miquelon at the Paris Peace negotiations – if they promised not to build any fortifications. This seemed unlikely to Philip Stephens. He thought that France was more likely to use these off-shore islands to mount an attack on the British-held mainland and so he sent Cook across the North Atlantic Ocean to chart the archipelago.

Few people have bothered to ask how Captain Cook, supposedly “the greatest navigator of his age”, could have missed coastal features that even the dullest sailor would have discovered – features as obvious as Bass Strait. Cameron-Ash demonstrates that he didn’t miss them; rather, he protected them from Britain’s rivals. The only way to protect a valuable discovery, short of occupation, was to use the age-old practice of cartographic secrecy. The navigator concealed the strategic feature either by omitting it from his map, or by drawing a false coastline. In this way, he hoped to deflect foreign interest and buy some time until his government could afford to garrison the place. Just as importantly, the navigator had to keep these strategic discoveries secret from his crew. Sailors were poorly paid in those days and were known to sell information to rivals. Cook’s Endeavour was not immune from spies, as we soon learn from this book.

Cook’s experience in Newfoundland had taught him that offshore islands were dangerous. They could be used by your enemy to make trouble. So when he found a Strait separating New Holland from Van Diemen’s Land, as he expected to, Cook concealed it by depicting the island as a peninsula. “Lying for the Admiralty” clearly explains how Cook achieved this in his chart, by providing the reader with a sketch map drawn by the cartographer, David Fraser. When this map is compared with Cook’s manuscript map on the preceding page, Cook’s brilliant fabrication, or trompe l’oeil, is complete.

Another of Fraser’s excellent sketch maps shows how Captain Cook found Sydney Harbour by following a well-worn Aboriginal track along the coastal ridge that took him from Botany Bay up to Bellevue Hill and then along today’s Oxford Street. From this high ridge he saw the panorama of Sydney Harbour and surely thought he’d arrived in a naval heaven. This deep, natural harbour had to be concealed at all costs. Consequently, in his journal Cook makes only brief mention of Port Jackson when he inexplicably sails past the enticing Sydney Heads after leaving Botany Bay. But the secrecy didn’t stop there. Cameron-Ash reminds us how the British government concentrated on Botany Bay for decades to come, never mentioning the much richer country that Cook saw to the north and south of the Bay. That shallow inlet was the single focus for all European discourse concerning Australia for half a century.  Situated just a few miles south of hidden Sydney Harbour, Botany Bay became one of the most successful decoys in history, equal to the Greek’s gift of the Wooden Horse to Troy.

Cameron-Ash goes into all of this with a detective’s instinct, combining the forensic skill of a lawyer and a keen eye for detail, to provide new information and a fresh point of view. She has spent long hours at the National Library in Canberra and elsewhere, re-examining Cook’s original journals and charts with all their erasures, additions, omissions and fabrications. She searches for clues and mulls over anomalies that other writers have avoided or swept under the carpet because they seem impossible to explain. Some of these anomalies include:

– How on earth did Arthur Phillip know about the islands in Port Jackson before he left England in 1787, given that they cannot be seen through the Heads because of the dog-leg entrance to Sydney Harbour?

– Why didn’t Cook investigate any other inlet between Botany Bay and the Tropic of Capricorn? As a naval officer on an unknown coast, he had a duty to find a useful port of shelter and refreshment. Yet, after the shallow and exposed Botany Bay, the Endeavour sailed non-stop past Port Jackson, Broken Bay, Newcastle Harbour, Port Stephens, Port Macquarie and several other inlets, never entering any of them.

– How odd it was that Captain Cook recorded the latitude of Point Hicks as precisely 38°0’0”S – no minutes, no seconds.

– Why would Cook choose an island in the Gulf of Carpentaria, off the west coast of Cape York Peninsula, to claim possession of the mainland’s east coast?

– Why did Joseph Banks, who had a penchant for ceremony, fail to record a single moment of the historic possession ritual?

With a rich vault of over fifty illustrations, “Lying for the Admiralty” is a map-lover’s delight, a real-life cartographic thriller and a page-turner. The Endeavour voyage is placed in its geopolitical context of the Second Hundred Years War, when France and Britain were vying for control of shipping lanes around the world. Maps are weapons of war and the falsification of maps is a legitimate ruse de guerre. James Cook is the eighteenth century’s James Bond, concealing his strategic discoveries until Britain can garrison Australia and keep it out of French hands.

This is an exciting book, and one that leaves any serving or former intelligence officer – especially from Britain or Australia – nodding appreciatively on almost every page.

*Warren Reed was an intelligence officer with the Australian Secret Intelligence Service (ASIS). Trained by MI6 in London, he served in Asia and the Middle East. Later, he was Chief Operating Officer of the Committee for Economic Development of Australia (CEDA).