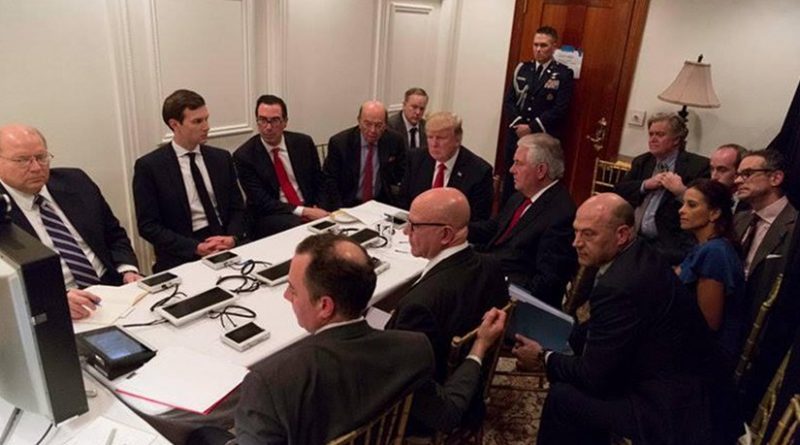 Within a few weeks of being sworn in as US President, Trump has revealed his style and approach as far as the other countries are concerned.

Obviously, this approach is no different from the earlier US Presidents. Perhaps, his predecessor Obama was a little less aggressive towards other countries that made many Americans criticize him and in the later period of his presidency, Obama also adopted similar approach of using force to “discipline” weaker countries and applying economic sanctions to “discipline” stronger adversaries.

Now, President Trump has no hesitation in using “mother of all non nuclear bombs”, to kill the terrorists in Afghanistan. Considering that it was ” a mother bomb”, the number of people killed and injured should have been many more than what has been reported. While the target were terrorists, many innocents would also have been injured and killed, who would not know the difference between “mother bomb” and “sister bomb”. Whether “mother” or “sister,” many innocent people who died would have been wondering at the time of death why the bomb was falling on them and what mistake they have done.

The then US President bombed Iraq earlier saying that Iraq was in possession of weapons of mass destruction, which was proved to be false later on. The past US Presidents did the same in Vietnam claiming that American intervention was necessary to protect democracy and freedom of speech in Vietnam and prevent take over by communists.

Will it be North Korea next?

Now, in all probability, President Trump may use this strategy of bombing other countries in North Korea too.

In the past, US Presidents have been militarily attacking or bombing only weak countries who would not be able to retaliate. However, they were more cautious when they dealt with stronger countries like Russia or China. In such cases, economic blockade was the more acceptable strategy for US Presidents.

Loss of lives of Americans different

Obviously, like several previous Presidents of US, President Trump would not also bother about the loss of lives of innocent people. Like other earlier US Presidents, Trump would justify such loss of lives, since the bombing was carried out in the American interests. American people, by and large, have been applauding such attacks by US Presidents in the past. They only felt sorry when a few lives of American soldiers were lost in the process , though the innocent people of other countries who died have been many more.

Of course, in recent time, by applying sophisticated technology and military warfare techniques, US has been attacking other countries without sending it’s troops in a big way and this strategy appear to be pleasing Americans.

President Trump has been using his trump card which is his assertion that in all matters, it should be America First. When he says America First, obviously, he means that US should dominate the world in all spheres.

Obsession of US Presidents

US Presidents have all along been having an obsession that God has created America to police the world. Obviously, President Trump share this view and will assert this view in a much more crude way than the other Presidents did.

In the past, US Presidents had their way in all the world conflicts and President Trump would continue to have this advantage.

Other countries should know

Only the world has to realize that US has only one interest and that is the interest of US and it’s claims as supporter of freedom of speech, democracy etc. are only cosmetic jargons used to conceal the self-centred approach of USA in dealing with other countries.

This style of American foreign policy is amply clear when we look at the fact that US has ignored the aggressive take over of Tibet by China and China suppressing freedom in Tibet, since it would be in the interest of USA to keep the Chinese government in good humor considering the economic interests of US.

American people want only this approach of America First at any cost and therefore, President Trump’s popularity will remain undiminished in USA, whatever the world may think about his foreign policy.

Home » All US Presidents Are The Same On Foreign Policy – OpEd