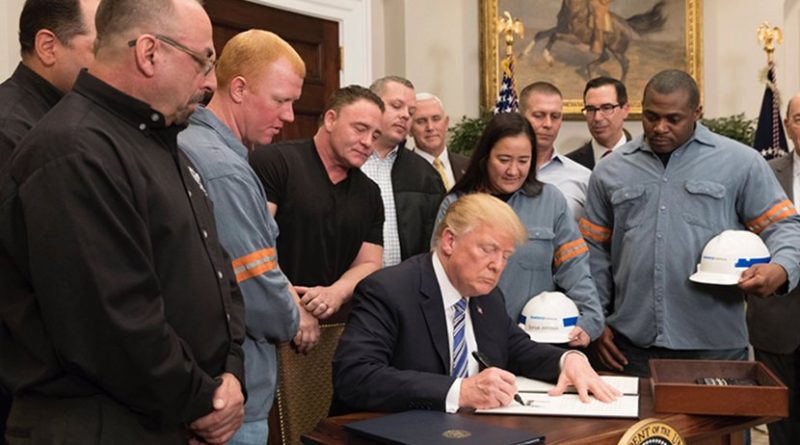 (EurActiv) — EU leaders demanded on Thursday (17 May) “permanent” and “unlimited” exemption from US President Donald Trump’s tariffs as a precondition for any trade negotiation with his administration, including market access.

The 28 heads of state and government discussed late on Wednesday in Sofia (Bulgaria) how to respond to Trump’s tariffs on steel and aluminium.

The leaders supported the Commission’s preliminary talks with the US Administration, but insisted on not starting proper trade negotiations unless an unconditional exclusion is granted.

“The EU is ready to talk about trade liberalization with our American friends but only if the US decides an unlimited exemption from steel and aluminium tariffs”, European Council President Donald Tusk told reporters after the conclusion of the Sofia summit on Thursday.

“I have to be very clear, and I am repeating myself by saying it: we want an unlimited exemption from the proposed tariffs,” insisted European Commission president Jean-Claude Juncker during the same press conference.

One of the options floated during the discussions between the EU and US trade teams was to impose generous quotas on the metals to escape the penalties and avert a trade war.

The quota could be higher than last year’s steel and aluminium exports to the US. But various officials and diplomats were sceptical about this option because of the impact it could have on European producers and the legality of the quotas themselves.

The White House adopted the tariffs on the grounds of national security, an argument the EU disputes, in part because the US and Europe are NATO allies.

An EU diplomat said that “unlimited” meant no quota, “that is our reading”. A quota was still illegal, and the EU “cannot accept something illegal”.

If no solution is found by 1 June, Trump says he will impose a 25% tariff on steel and 10% on aluminium from EU countries. Europe is ready to respond with its own countermeasures, including tariffs on iconic US products such as Levi’s and Harley Davidson.

Trump’s ultimate goal is to reduce the trade deficit with Europe that stood at €120 billion in 2017.In recent weeks he has threatened German carmakers with fresh tariffs if both sides fail to find remedies.

The Commission had prepared a four-point strategy to convince US and avoid a trade war. Juncker won the leaders’ support for his plan in Sofia. “The EU will not negotiate with a gun at its head”, an EU official said to summarise the mood in the room.

The EU executive’s proposal included talks to deepen energy cooperation in the field of liquefied natural gas; voluntary regulatory cooperation, as both sides sounded out during the failed free trade agreement negotiation; a solution to overcome the current blockade of the WTO’s Appellate Body nominations; and to improve reciprocal market access, especially for industrial products, including cars, and liberalisation of public procurement, an EU source explained.

A reduction of the tariffs for US cars in Europe, as part of the review of market access, would be possible only if the EU lowers the charges for all WTO members or as part of a new free-trade agreement with Washington, according to WTO rules.

Germany is the country most supportive of relaunching trade talks with the US, given its export volume and the threats to its automotive industry.

Berlin flagged the option of a free trade agreement-lite with the US, including only tariffs, in order to placate Trump’s concerns.

According to diplomatic sources, the strengthening of energy cooperation to facilitate US LNG exports to Europe also came from Berlin.

But other big member states, including France and The Netherlands, opposed this conciliatory approach with the unpredictable US president.

An EU diplomat said that Germany wants to find a quick way out of the dispute, but the group of sceptics is more concerned about the long-term relationship with the Trump Administration.

“We are not so sure about whether this administration wants to have a win-win situation,” the official added on condition of anonymity.