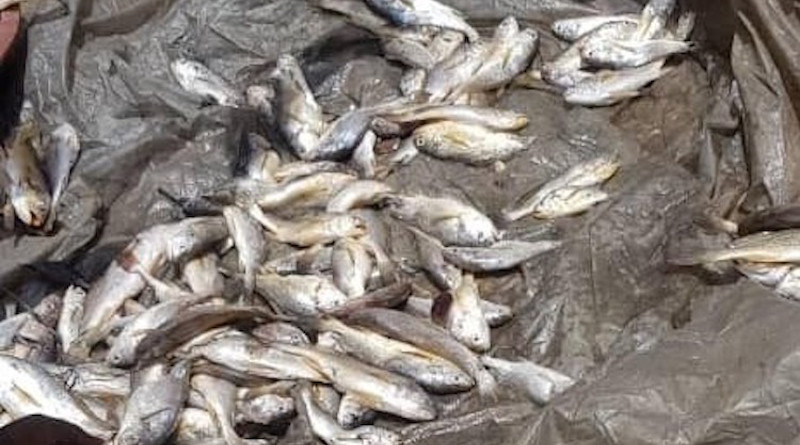 An immense blanket of dead fish stretching across three states has sparked anger and frustration among communities along the Atlantic Ocean coastline in Nigeria. The area is known for oil spills that have polluted the waters and left fish and other wildlife inedible.

The massive die-off was first reported in February when community people from Ogbulagha Kingdom of Delta State raised an alarm on the schools of dead fish floating and littering their shores. The silvery fish graveyard stretched from Delta State through Bayelsa State to Rivers State.

In response, officials of the National Oil Spill Detection and Response Agency (NOSDRA) took samples of the fish, sediment and water for analysis.

Idris Musa, head of NOSDRA, declared the die-off had nothing to do with the continual oil leakages from offshore platforms as claimed over the years by Amnesty International, the UN Environmental Programme (UNEP), and dozens of environmental organizations including those in Nigeria itself.

Musa admitted that the values of cadmium and iron were higher than the regulatory limit, according to a post that appeared on the NOSDRA website.

But environmentalists including Ako Amadi and Nnimmo Bassey of the Health of the Mother Earth Foundation (HOMEF), failed to find satisfaction in the NOSDRA report, finding it too superficial to be taken seriously.

They accused NOSDRA of playing down and even questioning the fact of the massive fish kill that was evident in many locations.

“The Ministry of Environment and relevant agencies have a duty to tell Nigerians what killed the fish so that we know how to respond to this and future incidents,” said activist Nnimmo Bassey. “We are not satisfied with NOSDRA’s report as this does not bring a closure to the saga.

“Explaining why we experienced a massive death of fish on our coastlines is not beyond our scientists within and outside government.”

The matter is also being pursued by lawyers under the aegis of the Association of Environmental Lawyers of Nigeria (AELN) who urged the Federal Government to take urgent steps to check the increased toxicity of the nation’s territorial waters.

Udengs Eradiri, the state’s commissioner for the environment, after a spill last December, recalled that “[Bayelsa] used to be green, you could farm or fish… We used to have very impressive harvests. You would spend just an hour in the water, and you have a lot of fish.”

“Today, you can spend the whole day without catching anything.”

About 40 million litres of oil are spilled every year across the Niger Delta, according to the activist group Rise for Bayelsa.

Bayelsa accounts for 40% of Nigeria’s oil wealth and hosts several large multinational oil companies. None of the companies operating in the area has admitted to having an oil or gas leak.

A statement from the Association of Environmental Lawyers of Nigeria, echoed the activists’ remarks. “The Atlantic coast in the Niger Delta has been inundated with masses of dead contaminated fishes which are washing up on the Atlantic coast shores,” said Mr. Kennedy Woryi, secretary of the Nigerian lawyers’ group

“This strange phenomenon portends grave danger to the affected states and communities as it will further compound the public health and economic complications that they are still struggling to grapple with as a result of the COVID-19 pandemic.”