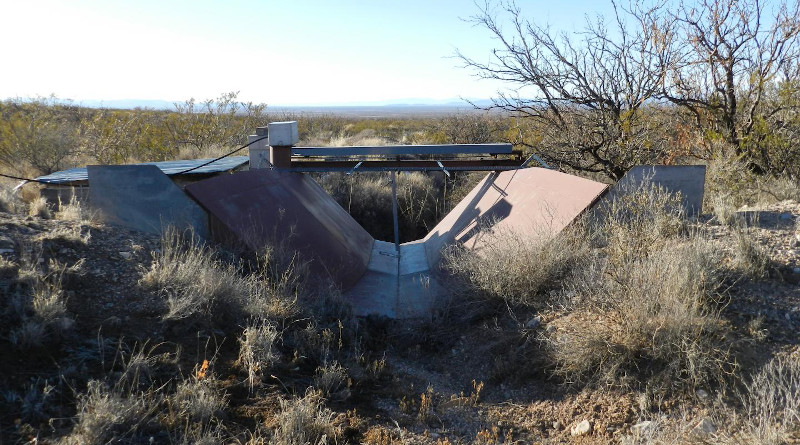 A flume at the outlet of the watershed that measures streamflow. CREDIT: Adam Schreiner-McGraw/UC Riverside

Grasslands across the globe, which support the majority of the world’s grazing animals, have been transitioning to shrublands in a process that scientists call “woody plant encroachment.”

Managed grazing of drylands is the most extensive form of land use on the planet, which has led to widespread efforts to reverse this trend and restore grass cover due to the belief that it results in less water entering streams and groundwater aquifers.

A new study led by Adam Schreiner-McGraw, a postdoctoral hydrology researcher at the University of California, Riverside, modeled shrub encroachment on a sloping landscape and reached a startling conclusion: Shrub encroachment on slopes can increase the amount of water that goes into groundwater storage. The effect of shrubs is so powerful that it even counterbalances the lower annual rainfall amounts expected during climate change.

Until now, researchers have thought that woody plants like trees and shrubs have deeper roots than grass. This belief stemmed from scientists performing their related studies on flat ground.

“It is striking that ecosystem composition is what controls projected future changes to groundwater recharge,” Schreiner-McGraw said. “This does not mean that climate change is not important, but that vegetation change is potentially more important and something that scientists and land managers should focus more effort on understanding.”

Co-author Hoori Ajami, an assistant professor of groundwater hydrology at UC Riverside, said the paper looks at the combined effects of climate and vegetation change on groundwater-recharge processes in arid environments.

“Most studies to date have looked at these changes in isolation,” Ajami said. “Here we illustrate that the combined effects of vegetation change and climate change could be greater or less than the sum of its parts.”

The intrusion of shrubs into grasslands is often considered a problem because it reduces the amount of forage available for livestock grazing and can lead to more bare ground patches and subsequent increase in soil erosion. This process of creating more bare ground is called “xerification.” Climate change contributes to xerification, but fire suppression and overgrazing play the biggest roles.

It makes sense that shrubs, which have deep root systems along with thick stems and many leaves, capture more water than grass does as it percolates down through the soil, leaving less available water to replenish the underground aquifers. Research on “diffuse recharge,” the process by which water replenishes groundwater supplies over a large area, seems to bear this out for flat landscapes. Xerification of grasslands has thus been viewed as bad for both livestock and the water cycle.

“We approached this research with a simple premise that topography plays a role in redistributing available water, and this should affect the outcomes of xerification,” said co-author Enrique R. Vivoni, a professor at Arizona State University.

The group looked at focused recharge, which occurs when hillslopes funnel water into concentrated areas, such as streambeds. Streambeds often have sandy bottoms, which allow water to quickly infiltrate and prevent the deep-rooted shrubs from sucking it up.

Data from a highly monitored desert mountain slope in New Mexico was used to simulate the effects of woody plant encroachment and climate change on water resources. The team discovered that not only did the shrubs increase focused groundwater recharge, but that they did so even under conditions where climate change reduced the amount of rainfall.

They also modeled a more extensive form of shrub encroachment called thicketization, in which plants grow in dense stands with no bare patches, and found, as in prior flat landscape research, the shrubs reduced the amount of groundwater recharge on slopes as well.

On hillslopes, bare soil in between patches of shrubs is necessary to drive water into streambeds. Increased runoff increases focused groundwater recharge.

“We were surprised to find that a transition from grassland to shrubland can increase sustainability of groundwater aquifers,” said Schreiner-McGraw. “The best way to increase focused recharge in this system is to increase the amount of runoff from hillslopes that gets concentrated in the streambeds.”

Though the study took place in New Mexico, Schreiner-McGraw said it applies to similar environments. Large parts of California are also desert savannahs. Southern California and the Central Valley have landforms similar to those found in the New Mexico study site. These areas could experience similar hydrological processes, though atmospheric rivers create storms very different from monsoon storms, so more research is required.