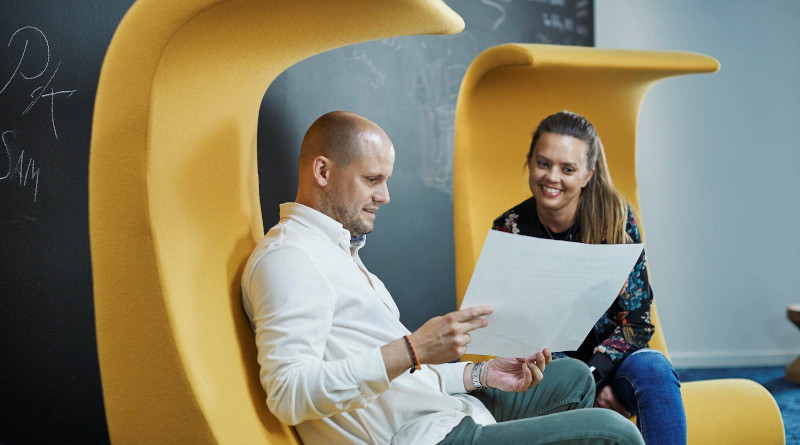 Research shows that unplanned meetings are often the most productive. Here we see Christian Brandt and Siri Olsen Corneliussen of SpareBank 1, before working from home became the company’s new norm. Photo: Bård Gudim/SpareBank 1.

According to researchers, a team member in the IT industry spends up to ten hours per week in meetings. While leaders can have three times as much meeting time. But what is effective meeting culture on the web, and which meetings serve as a stalwart in our new digital everyday life?

From time waster to efficiency booster

Viktoria Stray, a SINTEF research scientist, is among those who been working on the issue of meetings for some time. According to her, they can in the worst case slow down projects and be perceived as a waste of time. Virtual meetings are by no means a new idea – many industries and businesses operate globally with no need for co-location. As a result, researchers working in this field have obtained clear insights into what is smart and what is not.

“For example, it is important to be clear about what sort of meeting you want to hold. Different meetings should be conducted in different ways. There needs to be a difference between brief status meetings, workshops where a group is to co-operate to solve a problem and, for example, open meetings in which an entire department or company is to be trained or receive new information,” she says. This means that virtual meetings also need good planning if they are to function effectively.

A meeting that is well-planned, with an agenda, an appropriate number of participants, good tools and a suitable timeframe can be very efficient.

This is what you should be aware of

This being said, it is easy to fall into some traps. The biggest challenge in virtual meetings is the lack of body language. When all one sees is a face, it is difficult to pick up the signals that a person normally provides in a physical meeting. Moreover, if video is not used it is impossible to interpret the body language. So using video and a good headset is essential, according to research scientist Nils Brede Moe.

Another challenge is to retain the attention of all the participants. When people are sitting in front of a computer screen they can easily lose focus on the meeting if they receive an e-mail, a text message or suchlike. This is particularly likely if the meeting has been going on for a while or if they feel that aspects of the meeting are not relevant to them.

“Using humour and showing support stimulate positive behaviour during meetings. Providing positive feedback, encouraging participation and proposing solutions to problems will improve the performance of the team,” says Stray. On the other hand, complaining has a negative effect, so the meeting chair should be quick to interrupt anybody who moans or grumbles.

“The tendency for “social loafing” –to expend less effort when being in a group than one would as an individual – increases with the number of participants and the degree of anonymity”, Stray explains. Participants who speak early during a meeting are more likely to be active later, so start with a simple, informal check-in procedure: what went well yesterday, or what do people perceive as the purpose of the current meeting?

The most productive meetings are unplanned

Studies indicate that most people working in a team spend slightly more time in unplanned meetings than in planned ones. Meetings that happen by the coffee machine, chance encounters in a corridor or visits to another team are examples of unplanned meetings. Whereas these meetings are found to be productive, a large part of the time in planned meetings is perceived to be of little value and as much as 30-40 per cent of the meeting time is perceived as being wasted, according to the researchers. Meetings that produce little of value impede the progress of a project and reduce job satisfaction.

Attending a large number of meetings is tiring

When all meetings take place in front of a computer, people spend more time sitting still. Hence, those who usually attend a lot of meetings and are used to moving from one meeting room to another find it more tiring when faced with many consecutive meetings, often without breaks. Staring at a computer screen all day is also tiresome, when one would normally be used to seeing other people. Researchers therefore stress that we should choose to attend certain meetings, and drop others.

According to them, one should ask oneself the following:

So how does online meeting culture function in practice?

At the Norwegian SpareBank 1 in Oslo it would appear that the number of meetings has increased since before the corona virus crisis. Informal meetings have become less common because now these also have to be scheduled. The result is that all meetings now appear to be more formal, according to Marthe Slaatsveen, Development Manager and Team Leader at SpareBank 1 Development.

In spite of this, there is a consensus at the bank that online social chat is actually surprisingly productive.

“It almost feels as if we have got to know each other better now that we can see the family dog and the wife in the background. ‘Have you painted your room?’ someone might ask. On Friday we had a bit of fun: somebody had given themselves a haircut, which caused a lot of laughs.”

At the same time people might not feel comfortable sharing everything. “I sit in the middle of my living room. To begin with I was afraid that one of my three boys or my husband might walk past in his underwear, but now I’ve decided just to take it as it comes,” says Slaatsveen.

Another challenge is that chairing meetings becomes more difficult, in her opinion:

“On some days I have felt completely drained after staring at a blank screen without getting feedback from people,” she says. I have found that asking, “What do you think about this?” is not very effective. It’s better to say, “Let’s all think about this for two minutes, and then we’ll go round the table.”

However, there are also some positive aspects as regards meeting culture:

“Meetings start more promptly now and it takes less time to get things going. Also, instead of using whiteboards, we write things directly in a digital application, which saves a lot of follow-up work,” says Slaatsveen. She believes that in future we will spend more time working from home and will be more flexible about when we work. Maybe it will be common to do a morning session and an afternoon session later in the day.

When asked which meetings work best, she answers:

“Monday commitments – meetings that are held on Monday morning, where we look at what plans and goals we have for this week. These are brief meetings, lasting no more than fifteen to twenty-five minutes. They are by far the best meetings!”

Also at Entur, a company that supplies services for simplifying travel among a combination of public transport companies, experience of digital meetings has been generally positive. Here there are no more meetings than there used to be, but employees have become better at using digital meeting tools and discovering the advantages of working from home.

“In the past people avoided online meetings. The pre-conceived idea seemed to be that they were less effective than meetings in which everybody was physically present,” says Rolf Knutsen. “However, there has been a change in attitude. Our organisation has a fairly flat structure and now everybody participates on an equal footing.”

Moreover, Knutsen believes that the impression of most employees is that productivity is high. “We get much more peace so that we can actually work. In the long run we may have problems co-ordinating ourselves, but we are conscious of this and so far it has not been a greater problem than usual,” he says.

“We hold Monday meetings in which the teams present things that are relevant to the week ahead. This is not about what we are to do within the team, but about what may be of interest to others. A positive experience we have had is that participants specify in advance what items they wish to talk about. This makes it easier to follow and the meetings become shorter and keep to the agenda.”

These are the SINTEF researchers’ ten tips for enhancing the efficiency of online meetings:

This article is based on the following scientific articles: