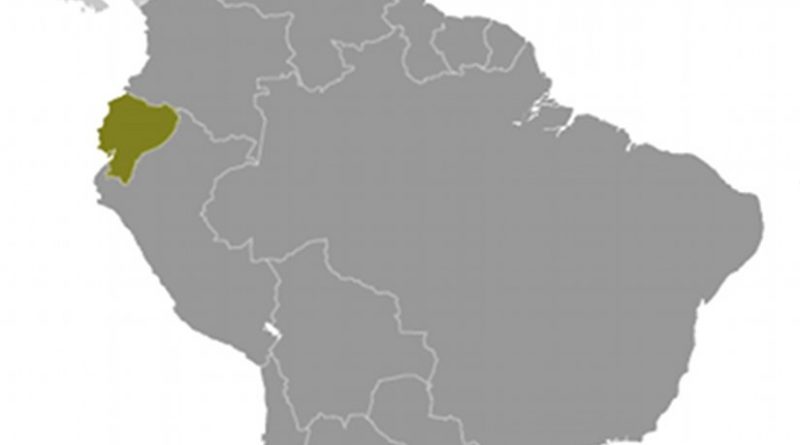 The Ecuadorian Congress moved Thursday, June 13 to adopt a new mining law that aims to advance the development of small- and medium-scale mines in Ecuador. Mining is a relatively undeveloped sector in Ecuador, but the potential exists for exploitation of copper, gold, and silver deposits. Approved by a 105 to 14 vote in Congress and the clear support of President Rafael Correa, the new law seeks to grow the economy by stimulating mining. As inducements to miners, the legislation sets ceilings on mining royalties, postpones payment of windfall taxes, and eliminates red tape that would slow the process of investment and development. [1]

Under the new law, small-sized mines are to pay a minimum of three percent in royalties; medium-sized mines pay a minimum of four percent in royalties; and large-sized mines pay a minimum of five percent in royalties, with the overall ceiling of royalties due capped at eight percent. [2] This law also delays a previously established windfall tax set at 70 percent until miners recover their investment. This postponement, however, has the potential to effectively wipe out windfall tax collection as companies are not obligated to pay until they begin experiencing income in excess of a fixed, baseline amount; in the case of mining, this time period can often stretch for the entire duration of a mine’s productive life. A number of additional, smaller changes made by the law largely reduce the amount of red tape necessary to run mining operations in Ecuador.

While these changes are being welcomed by small- and medium-scale miners, large-scale mining companies have already started rethinking their commitment to further investments in Ecuador. On June 10, three days before Congress approved the law, the Canadian mining company Kinross Gold announced that it was abandoning its $1.2 billion USD Fruta del Norte project to explore and extract gold in the Zamora Chinchipe province. [3] The Ecuadorian government has temporarily taken over the mining site while it considers bids from companies in Chile, Qatar, and China. Only one day after Kinross Gold announced it was cancelling its concession, INV Metals, another mining company out of Canada, announced that it was also reevaluating its own concession for mining in Ecuador. [4] Environmentalists and local inhabitants are also alarmed by the new law, understandably worried about the potential side effects of an expanding, and increasingly unmonitored, mining industry. Much of the “red tape” eliminated by this legislation in fact detailed the requirements for the submission of environmental impact reports. Also eliminated in the name of efficiency were requirements for gaining approval from local groups and authorities before mining operations begin, as well as other prohibitions on where mining is allowed to take place. Under the new law, it is left to the mining companies to request environmental impact reports and then report findings to the government. The Ecuadorian government is under no obligation to ensure that reports are actually written or that harmful operations are shut down.
Source: Infosur Hoy

Indigenous communities in Ecuador have already announced their opposition to the mining law. Members of the Confederacíon Kichwa del Ecuador (the Kichwa Confederation of Ecuador, ECUARANI) and the Confederacíon de Nacionalidades Indígenas del Ecuador (Confederation of Indigenous Nationalities of Ecuador, CONAIE), two of the largest and most powerful indigenous groups in Ecuador, expressed their concern over the lack of protection for national resources and the complete disregard for the rights of indigenous peoples living in the impacted areas. Now, the government would be under no obligation to obtain permission from or even inform already established communities. In planning mobilizations and general resistance to the mining law, ECUARANI president Carlos Pérez has not ruled out filing lawsuits against companies that fail to consult residents prior to initiating mining operations. [5]

Although the development of the mining industry in Ecuador would mean increased diversity of the national economy and decreased reliance on the oil industry, the benefits and consequences of mining have yet to be fully seen. Activists protesting the development of mining in Latin America point to the very serious negative impacts mining has on the environment and the surrounding communities. In countries such as Peru, the booming mining industry has led to massive deforestation, the diversion of natural waterways, and the contamination of streams and groundwater with toxic chemicals such as cyanide. For Ecuador, a country still operating under the cloud of recent legal battles over environmental and social devastation caused by the U.S. oil company Texaco (now Chevron), one would expect the Ecuadorian government to prioritize maintaining environmental integrity and respecting the presence and lives of already established communities. With this new law, Ecuador continues to push its extractive economic agenda, pursuing an unsustainable developmental model.

Home » Opening The Door To Mining In Ecuador – OpEd