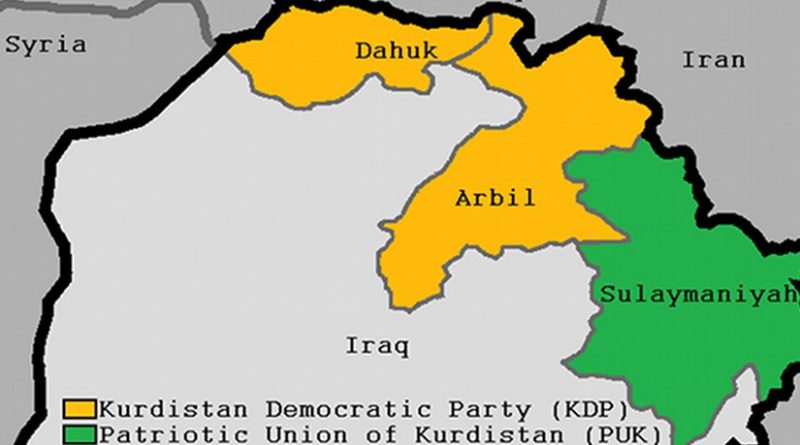 On January 5, 2020, the Iraqi parliament decided to remove all foreign troops from Iraq, including US forces. Many Shia military groups threatened to use violence against any power refusing this plan. The new Iraqi prime minister, Mustafa al-Kadima, promised to commit to this decision.

The move cast a shadow on the Iraqi-American strategic dialogue of June 10. If Baghdad and Washington are unable to reach a proper deal, the Kurdistan Region of Iraq (KRI), as the media has reported, could host the US forces in its military bases.

This scenario means that Iraq is going to be on the brink of a new internal crisis. To contain the Kurdish – American hopes, Shia hardline members will release a new legislative resolution to force the Americans to leave the bases located in KRI. This will put them in a parliamentary confrontation with the Kurds.

They will also accuse the Kurds and the Americans of having a conspiracy against Iraq. Therefore, they will interact with Iran to exercise different geopolitical tactics to threaten the KRI.

The Kurds could end up in a real deadlock. They well know that Baghdad could impose more economic and financial punishments on them. This will lead to the destabilization of their region, as people will not tolerate the Kurdish leaders if they fail in ensuring the salaries of public officials. In other words, this will put the future of the social and political stability of the KRI at risk.

In the aftermath of this scenario, the sense of fraternity between Arabs and Kurds will be tarnished. This will influence their mutual interactions in ethnically mixed cites. Hate speech will spread, and acts of revenge will proliferate for the tiniest of reasons.

Furthermore, the policies of demographic change will be widely applied to create new geographical realities. What is worse, we have a completely militarized society that tends to use violence to settle its simple problems. Thus, many ordinary victims will pay the cost for these dramatic high-level political events.

It is expected that the KRI will face more economic setbacks if Baghdad considers isolating it geopolitically. For example, Baghdad can halt use of the Kirkuk-Ceyhan pipeline, which winds through the KRI on its way to export markets in Turkey.

This will prevent the Kurds from their geographically important role as a territorial bridge connecting Turkey and Iraq. Instead, Iraq can send its oil by tankers, as it was doing before, to Iran. This will result in weakening the function of the KRI in Turkish economic policy. As a result, Turkey might change its view towards the future of its relations with the Kurdish region.

All these things will encourage Islamic State (IS) to resurface. Historically, it could exploit the controversies between Baghdad-Erbil and Tehran-Washington to solidify its presence in Iraq. In this way, it managed to control Mosul and 40% of Iraqi lands in 2014.

A return to similar circumstances means that a new strategic vacuum will be formed around the KRI, and IS knows well how to fill such geographical spots.

It is expected that IS will attempt to benefit from this game by all available means. This time, the KRI will be a theater for a complicated contest, and its security will be in real danger.

In this case, the conflict between the Popular Mobilization Units and Kurdish Peshmerga forces will be imperative. This military stand-off will erupt in the places surrounding KRI, such as in Mosul, Kirkuk, and Diyala provinces.

Accordingly, the population structure of these cities will also be changed. Unlike the sectarian fight that engulfed Iraq in 2006, this new phase of the war will be based on ethnic factors and will give rise to an extra wave of regional polarization in Iraq.

Such tension has been seen on many different occasions. We fear that it might evolve into a long war between Arabs, Kurds, and the others, not only in Iraq but also in Syria, Turkey, and Iran. This will burn the whole region.

In this regard, it seems that the US is caught at the heart of the Iraqi dilemma. It can’t afford the tremendous cost of staying in Iraq nor is it ready for a complete withdrawal as it thinks this will be interpreted as a big victory for Iran.

For the Americans, conveying troops to KRI military bases without real arrangements with Baghdad will not be a logical option. The truth that no one can obscure is: If the US resorts to this decision, it will implicate its ally- the Kurds- in a lot of problems that can’t be solved easily. the geopolitically fragile balance in the KRI will not be able to hold up in the face of these developments.

From a military standpoint, many observers confirm that the United States has already lost Iraq. Now it must focus on how to preserve its security, political, and economic ties with this country. This is what must be seriously discussed in the next strategic dialogue to establish long-term understandings between these sides.

Home » Will US Troops End Up Stationed in Iraqi Kurdistan? – OpEd

One thought on “Will US Troops End Up Stationed in Iraqi Kurdistan? – OpEd”