India, Bhutan and China are part of a strategic triangle in the Eastern Himalayas with the inverted apex jutting in the form of the all important Chumbi Valley in Yadong (Yatung) county of Tibetan Autonomous Region (TAR). Given proximity of the Chumbi Valley to India’s jugular to the North East the 20 kms wide Siliguri corridor, the two arms of the triangle resting on Indian state of Sikkim in the West and Bhutan in the East assume importance. Chinese plans to extend the Qinghai Tibet railway to Xigaze and Yadong close to the Sino Indian border have added to concerns in India with tardy communication links on the Eastern frontier. Given the strategic significance, India has been able to maintain balance primarily through the Indo Bhutan Treaty of Friendship first signed in 1949 and revised on mutually agreed terms in 2007.

Thus two arms of the triangle could be said under Indian control and influence, even as China holds the base. This equation may be upset in case China is able to gain greater access to the Bhutanese arm of the triangle with a reset of the Sino Bhutan boundary, negotiations for which are underway. Given the difficult terrain on the Western arm of the Chumbi Valley and scope for expansion is primarily in the East. These fears were attenuated with the first ever summit held between the prime ministers of Bhutan and China in Rio recently. An over view of the relationships would therefore be in order and is covered as per succeeding paragraphs. 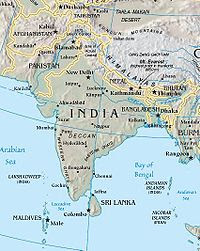 The Indo Bhutan Treaty of Friendship in 2007 has led to greater diplomatic freedom to Thimpu opening prospects of engagement across the board. The most significant change in 2007 was mutual reaffirmation of sovereignty and territorial integrity in the preamble of the Treaty which was not there in the 1949 text. More over Article 2 of the 1949 Treaty stated that Bhutan will be guided by the advice of India on external relations. The Article read, “The Government of India undertakes to exercise no interference in the internal administration of Bhutan. On its part, the Government of Bhutan agrees to be guided by the advice of the Government of India in regard to its external relations”. This has been reviewed and Article 2 of the 2007 Treaty reads, “__the Government of the Kingdom of Bhutan and the Government of the Republic of India shall cooperate closely with each other on issues relating to their national interests. Neither Government shall allow the use of its territory for activities harmful to the national security and interest of the other”. The sum total of implications of the change is greater freedom of choice to Bhutan in management of sovereignty and external relations.

This background is essential to understand the nuances of the first ever bilateral held between the Chinese Prime Minister Wen Jiabao and Bhutan’s Prime Minister, Jigmi Y. Thinley on the side lines of the Rio Conference on Sustainable Development in June 2012. While Bhutan has been expanding foreign relations over the years and in 2011 chaired South Asian Association of Regional Cooperation (SAARC), there was no formal diplomatic relations or summit level contact with Beijing. Having greater autonomy post 2007 Treaty, it is inevitable that there would be greater traction for Bhutan to establish diplomatic relations with China the only nation other than India with which it shares a land border. Proposal for diplomatic relations was first discussed between the two countries in 1998 during the 12th Round of border talks.

Significantly, Bhutan and India are the only two countries with which China has not resolved land borders. There are two areas of dispute, one falling in North West Bhutan covering 269 sq km and the other Central Bhutan covering 495 sq km. The North West area comprises Doklam (89 sq km), Sinchulumpa (42 Sq km), and Shakhatoe (138 Sq km) in Samste, Haa and Paro districts and Central parts the Pasamlung and the Jakarlung valley in the Wangdue Phodrang district. The 1998 agreement between Bhutan and China entitled, “Maintain Peace and Tranquility on the Bhutan-China Border Areas,” provides the framework for stability on the border. However despite this there have been reports of intrusions by Chinese troops in Bhutanese territory. In November 2007 some reports indicate dismantling of unmanned posts in the Dolam Valley. Bhutan’s media reported a number of intrusions in 2009.

At the same time Bhutan and China have held 19 rounds of talks on the boundary dispute so far the last one being held in January 2010 after a gap of four years where a joint field survey was agreed upon. This was to be carried out of disputed areas in Doklam, Charithang, Sinchulumpa and Dramana in Bhutan’s North West and Pasamlung and the Jakarlung valley in the Wangdue Phodrang district in Central Bhutan. It is reasonably well established by now that China is looking for a package deal with Bhutan seeking areas in the North West while establishing Bhutan’s claims in the Central region. This offer was first made in the sixth round of talks held in August 1990. Chinese quid pro quo does not take into account that the territory is a part of the sovereign state of Bhutan and strategic interests seem to be pushing Beijing to offer a package to the southern neighbor. Herein lies the rub where India’s interests come in given proximity of the North West areas to the Chumbi Valley. In case Bhutan seeks to appease China to move the trajectory of relations forward, it would most certainly cause concern in Delhi and may even be objected to.

In the light of this legacy the Wen Jiabao – Thinley meet seems to be an opening gambit by both sides to test the waters on how far they can push the envelope without India blocking the package deal altogether. Premier Wen Jiabao as per a report by the AFP stated, “China is willing… to establish formal relations with Bhutan, resolve the border issue between the two nations at an early date, strengthen exchanges in all areas and advance Sino-Bhutanese relations to a new stage.” A report in the Hindu of 27 June also quoted Mr. Wen saying that China was “willing to complete border demarcation with Bhutan at an early date.” Mr. Thinley was quoted by Xinhua the official Chinese news agency to have expressed that Bhutan wishes to forge formal diplomatic ties with China as soon as possible.[1] Bhutan has also sought China’s support in elections to the non permanent seat in the United Nations Security Council being vacated by India in 2013.

South Asia experts from Chinese think tanks, China Institutes of Contemporary International Relations (CICIR) and Chinese Academy of Social Sciences (CASS) as quoted by the Hindu in a report on 26 June 2012 have been quick to speculate that Bhutan would not have taken these initiatives without India’s express, “approval or agreement.”

The official web site of the Cabinet Secretariat of the Royal Government of Bhutan however makes muted remarks on the bilateral summit and states, “The meeting [Wen Jiabao-Thinley] carries great historic significance as it marks the first meeting between the heads of the two governments. They discussed bilateral issues of mutual interest and multilateral cooperation including Bhutan’s bid for a non permanent seat on UN Security Council for the term 2013-2014, elections for which are to be held in fall this year”. No mention was made of either diplomatic relations or boundary issue.[2]

Bhutanese writer, Kuenzang Choden writing in web site The Bhutanese on 22 June 2012, quotes Media Attache of Bhutan Prime Minister’s office to refute any initiative by Prime Minister Thinley to propose establishment of diplomatic relations with China. He states, “local Chinese media had misreported that Bhutan and China will establish diplomatic ties.” Kuenzang further goes on to quote a Foreign Ministry official who sought to remain anonymous indicating, “It is unlikely that Bhutan and China will have diplomatic relations soon. There are certain policies when it comes to the Permanent five of the United Nations Security Council.” [3]

There are obviously different versions being floated of deliberation during the summit. Has the Chinese media gone overboard in flagging the initiative for bilateral relations and resolution of boundary issue will not be clear but without a push from the officials accompanying the Prime Minister these reports are unlikely to have been published. Has Bhutan gone ahead with the move after approval from New Delhi as some Indian media reports and Chinese scholars seem to suggest or the Prime Minister of Bhutan has been misquoted by the Chinese media as Bhutanese authorities are indicating or this is an unilateral initiative by Thimpu, hence the foreign office cover up is not clear so far.

Suffice to say that first summit level contact between Bhutan and China has been established and the engagement will be taken forward to establish diplomatic relations and possibly even resolve the boundary issue in times to come. The trajectory may not be easy to determine at this juncture nor the time frame predictable. Settlement of boundary however is unlikely to happen soon. Given importance of the Chumbi Valley India is unlikely to agree to any concessions by Bhutan that leads to exchange of territory in this area providing further elbow room to China. Fears expressed by reports in the Indian media may therefore may be unfounded.

On the other hand Chinese keenness to extend the railway line to Yadung and secure the Bhutanese arm of the Chumbi Valley triangle may be as much due to fears of India cutting off the salient jutting threateningly towards the Siliguri corridor. This will overcome the vulnerability of the Siliguri Corridor providing it additional depth. This could be one explanation for given the operational challenges of launching a major thrust through the Chumbi Valley to cut off the Siliguri corridor and India’s build up of forces on the Eastern front, Chinese offensive in the area will be posed major operational challenges.

What ever it be, given mutual apprehensions, strategic stability in the India Bhutan China triangle would require statesmanship of a high order. This will depend on how the political and military leadership of the three countries and especially New Delhi and Beijing are able to manage the same ensuring Thimpu’s sovereignty and autonomy. The Indian government has done well not to over react to media reports and would be seeking full details of Chinese interaction from Bhutan to chart out a future course of action. This will no doubt be done keeping in view larger national interests of managing relations with China amicably yet not compromising on basic national security interests, thus implying any attempt to extend the Eastern arm of the inverted apex of the Chumbi Valley will be fiercely resisted by New Delhi.

Security-risks.com is an independent venture by Rahul K Bhonsle, a veteran soldier and Promila Bhonsle. This endeavor is devoted to risk reduction and security through the processes of information and knowledge.