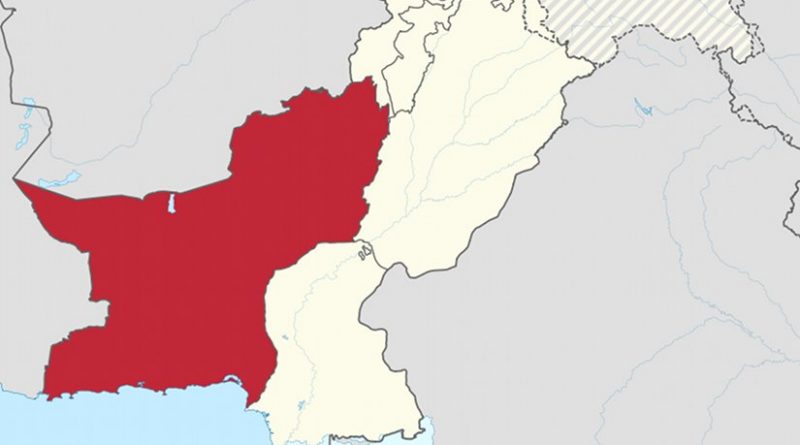 The Superintendent of Police (SP), Mubarak Shah, and three of his Police guards were shot dead when motorcycle-borne terrorists opened indiscriminate fire at a Police Mobile unit while it was patrolling in the Killi Deba area of Quetta, the provincial capital of Balochistan, on July 13, 2017. Senior Police Official Abdul Razzaq Cheema disclosed that the attackers opened fire from different directions, killing Quaidabad SP Mubarak Shah and his three Police guards, adding that terrorists managed to escape from the scene of the crime. The Tehreek-e-Taliban Pakistan (TTP) faction, Jama’at-ul-Ahrar (JuA), claimed responsibility for the attack. Asad Mansur, JuA spokesman, claimed in a message issued on social media after the incident, “We carried out the armed attack on police officials.”

Just three days earlier, the District Police Officer (DPO) of Qilla Abdullah, Sajid Khan Mohmand, and his security guard and driver were killed and over 10 other people, including five Police personnel, were injured in a suicide blast in the border town of Chaman in the Qilla Abdullah District of Balochistan on July 10, 2017. Sources indicated that DPO Mohmand was on an inspection of the Eidgah area of Boghara Road with his team, when the suicide bomber riding a motorcycle blew himself up after hitting the Police vehicle. Mohmand died on the spot as the suicide bomber hit the vehicle on the side where he was sitting. The TTP claimed responsibility for the attack.

On June 23, 2017, seven Policemen were among 13 killed, while 20 others were injured in a suicide attack near the office of the Balochistan Police Chief on Gulistan Road, Quetta. The Police stated that the bomber blew up his vehicle after he was stopped by law enforcement personnel for screening, while he was suspiciously circling the area. The Bomb Disposal Squad (BDS) confirmed that the explosives were planted in the vehicle. “The blast took place near the IGP (Inspector General of Police) office and it´s possible the assailants were trying to enter the (Army) cantonment which is close by,” Provincial Government Spokesman Anwar-ul-Haq Kakar said. Two separate outfits, JuA and the Islamic State, claimed responsibility for the attack.

On June 19, 2017, two Navy sailors were shot dead and three others were wounded when their vehicle was ambushed by four assailants on two motorcycles in the Jiwani area of Gwadar District. The sailors were transporting iftar items during a routine run from Jiwani town, when their vehicle came under attack. There has been no claim of responsibility for the attack.

On June 11, 2017, three Balochistan Constabulary personnel were killed and one wounded in a gun attack on a check post in the Chakki Shahwani area of the Sariab Road in Quetta. Balochistan Deputy Inspector General of Police Abdul Razzaq Cheema disclosed that four unidentified assailants riding two motorcycles had opened fire on the check post.

Against the backdrop of a renewed wave of targeted attacks against Senior Police Officers in Balochistan, Chief of the Army Staff (CoAS) General Qamar Javed Bajwa arrived in Quetta on July 14 and reviewed the security situation prevailing in the restive Province. According to a statement issued by the Inter-Services Public Relations (ISPR), the Army Chief was apprised that “terrorists in desperation” were targeting law enforcement agencies and soft targets since there had been a phenomenal reduction in targeted killings on sectarian grounds in the Province.

The first six and half months of the year, however, have registered dramatic declines in violence against Security Force (SF) personnel in Balochistan, as compared to the same period in 2016. A 39.68 per cent decrease in SFs fatalities was recorded, from 63 SF personnel killed in 2016, down to 38 such fatalities in 2017. Nevertheless, Balochistan still leads among all the Provinces of the country on this index. According to partial data compiled by the Institute for Conflict Management (ICM), out of the 38 SF personnel killed in the Province in 2017, 26 were killed in Northern Balochistan, while the remaining 12 were killed in Southern Balochistan. As has been noted in the past, the North is afflicted by Islamist extremist groups such as TTP and Lashkar-e-Jhangvi (LeJ); Baloch nationalist insurgent groups operate in the South. The major Baloch insurgent groups include the Baloch Republican Army (BRA), Baloch Liberation Army (BLA), Balochistan Liberation Tigers (BLT) and United Baloch Army (UBA).

The higher levels of SF killings in South Balochistan in 2011-13 was the direct result of the extra-judicial killings of civilians by SFs, and the retaliatory targeted killing of SF personnel by ethnic Baloch insurgents. Despite, continued civilian killings, however, the retaliatory killing of SF personnel has seen a downward trend. Through 2016, at least 251 civilians were killed in Balochistan, of which some 138 were attributable to one or other terrorist or insurgent formation. The remaining 113 ‘unattributed’ fatalities were overwhelmingly the work of the State apparatus and its surrogates..

Of the 3,880 civilian fatalities recorded in Balochistan since 2004 [data till July 16, 2017], at least 1,090 have been attributable to one or other terrorist/insurgent outfit. Of these, 371 civilian killings (205 in the South and 166 in the North) have been claimed by Baloch separatist formations, while Islamist and sectarian extremist formations – primarily LeJ, TTP and Ahrar-ul-Hind (Liberators of India) – claimed responsibility for another 719 civilian killings, 660 in the North (mostly in and around Quetta) and 59 in the South. The 373 civilian killings attributed to Baloch formations include at least 155 Punjabi settlers since 2006. The remaining 2,790 civilian fatalities – 1,675 in the South and 1,115 in the North – remain ‘unattributed’. A large proportion of the ‘unattributed’ fatalities, particularly in the Southern region, are believed to be the result of enforced disappearances carried out by state agencies, or by their proxies, prominently including the Tehreek-e-Nafaz-e-Aman Balochistan (TNAB, Movement for the Restoration of Peace, Balochistan). The large and continuously mounting number of unattributed civilian fatalities reconfirms the widespread conviction that security agencies engage in ‘kill and dump’ operations against local Baloch dissidents, a reality that Pakistan’s Supreme Court has clearly recognized.

According to the Federal Ministry of Human Rights, at least 936 dead bodies of ‘disappeared’ persons, often mutilated and bearing the signs of torture, have been found in Balochistan since 2011. Figures obtained from the Federal Ministry of Human Rights by the BBC Urdu on December 30, 2016, pointed to large-scale extrajudicial killings by state agencies and their proxies. Most of them were dumped in Quetta, Qalat, Khuzdar and Makran areas where the separatist insurgency has its roots. The irony is that none of mainstream media reported such state sponsored atrocities, as media reporting from these areas is strictly forbidden. The International Voice for Baloch Missing Persons (IVBMP) says it has recorded 1,200 cases of dumped bodies and there are many more it has not been able to document.

According to IVBMP, Pakistani Forces (military, Frontier Corps, intelligence and Paramilitary) have abducted 480, killed 26 persons including women and children, and torched at least 500 properties in more than 100 offensives from March 1 to March 31, 2017. Only 30 persons among those abducted have been released so far. None of the abducted persons have been presented to any court or given the right to defend themselves. Balochistan’s Dasht, Tump, Mand, Dera Bugti, Kohlu, Quetta, and Makran regions have been the most affected areas, where Pakistani military carried out attacks and offensives against Baloch civilians. Recently on July 8, 2017, three civilians were killed and 265 were abducted by the Army from Dera Bugti and Mastung. The Army also reportedly ‘stole’ civilian property and valuables, including 300 camels.

While the SFs are engaged in a systematic campaign of extermination of the ethnic Baloch people through enforced disappearances and extrajudicial killings, they are, in turn, frequently targeted by Islamist terrorist formations such as TTP and LeJ in the northern Districts. 833 Policemen, including 17 DSPs, two DIGs and other Police Officials have been killed in numerous attacks including suicide hits and target killing in recent years, according to a July, 13, 2017, report quoting data collected from Balochistan Police Headquarters.

The Balochistan Government has prepared a new security plan for Quetta and other troubled Districts in the Province, in the wake of nation-wide terror attacks in the month of January. Official sources claimed, on February 19, that under the security plan jointly prepared by the Police, Frontier Corps and other security agencies, profiling of houses in the provincial capital would be carried out to track down the elements working as facilitators of banned outfits. A ban has been imposed on residing in mosques, seminaries, schools and Government buildings, each of which is required to get itself registered with the Police Station concerned. Registration of tenants has been made mandatory, with legal penalties for any failure to comply. Under the plan, the hosts will have to inform a committee to be formed by the area Police Station about the visit of any guests.

Terrorist and insurgent attacks on SFs at regular intervals have punched holes in the state’s security approach and orientation in the Province. The complex, multilayered, seemingly never-ending security crisis in Balochistan persists.

One thought on “Pakistan: Forces Under Fire In Balochistan – Analysis”